Dario Saunders Gets Valuable Advice For The Minor League 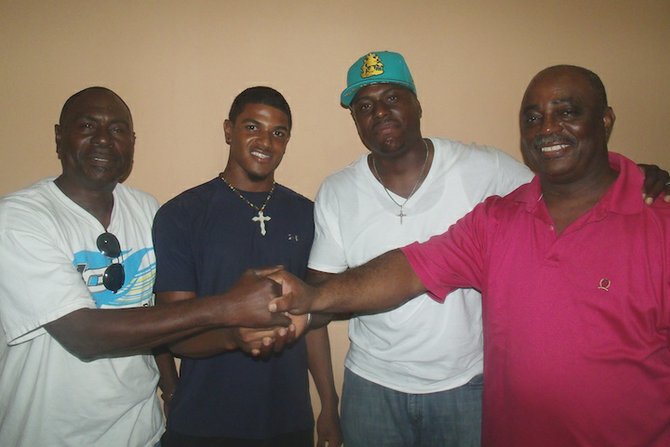 FROM several players who have been there and done it, Dario Saunders got some valuable advice to help him prepare for his trip to the Dominican Republic in April to play in the Cincinnati Reds’ minor league summer league programme.

Saunders, the fifth Bahamian now in the minor leagues, spent all day Saturday getting introduced to the Bahamian public at various functions, including a party for D’Quan Brown, who is preparing for a major surgery.

Brian Armbrister, the Reds’ scout in the Bahamas who was instrumental in securing the deal for Saunders, said it’s important for the Bahamas to show their appreciation to the latest player to crack the professional ranks.

Saunders, a 20-year-old native of Bimini, signed a seven-year deal with the Reds that was orchestrated by Armbrister and officially signed last week. The Reds’ global coordinator James William Stoeckel and their Curacao consultant Fermin Coronel were in town in November to conduct a showcase with the Bahamas Baseball Federation in Grand Bahama and New Providence when they were impressed by Saunders’ athletic talent.

“The contract was 18 pages and the organisation was very pleased to sign him,” Abrmbrister said. “One of the things they told him is that they would love for him to be able to get on base when he plays. So they want him to go to the Dominican Republic and show what he can do and they will be happy to welcome him to Arizona next year.”

As the last Bahamian to play in the Major League with the Atlanta Braves in September, 2011, Richardson said although he met Saunders for the first time (on Saturday), he was just excited to welcome him into the pro fraternity.

“I know that he’s going to be a great ambassador for the country. He’s going to a great organisation in the Reds and so I’m just glad for him and for baseball in the country because it’s going in the right direction,” Richardson said. “So that has me excited.”

Richardson, who made his pro debut with the San Francisco Giants in 2005 after being drafted three previous years, said he only wanted to encourage Saunders to go out there and do his best.

“I just want him to have fun and enjoy it,” said Richardson, whose career now has him in the New York Yankees organisation. “I just opened myself to him because we are all in the same fraternity. “When I started, it was just me and now there are five of us. I could only imagine what it will be like in the next 10 years. It really gets more doubly proud of his accomplishment and those others who follow me ahead of him.”

The 30-year-old Richardson said while it may take some time for Saunders to excel to the majors, he’s hoping that one day he can get some tickets from him to watch him play in the majors.

Saunders said he was honoured to meet Richardson, whom he has a lot of respect for, having watched his performance over the years. “It was unbelievable that someone of that calibre could talk to me and offer me the kind of advice that he gave,” Saunders said. “He told me about the things that I have to do and the obstacles that I will have to overcome down in the DR where I have to hold my head.”

For Saunders, it still hasn’t sunk in yet that he’s now officially a pro baseball player, but hearing the accolades and the sentiments from so many people has been just what he needed to hear.

As a former minor league player himself, Armbrister said he was honoured to assist another Bahamian in the pro ranks. “This guy did the work. For me, it was just a matter of making some phone calls and assuring them that this guy can play,” Armbrister said. “He can handle himself. He’s a very matured kid. That’s the most important thing and they believed in what I had to say about him. This kid is going to be a tremendous player once he can stay focused. I have to tip my hat off to Antoan, Richard and the other guys like Albert Cartwright and Sean. They all had a chance to talk with Dario. It wasn’t just about baseball.”

Armbrister said he, along with Saunders, Richardson and Cartwright all signed a Reds’ cap that they presented to D’Quan Brown. Armbrister said the guys showed that they definitely understand the meaning of what it is to be a pro player.

Without the support of Armbrister, Saunders said his dream would not have been a reality.

“He’s been a good ambassador for me. He’s a great guy,” Saunders said. “I am just delighted to have met him. He has helped me out tremendously and I really appreciate all that he has done for me.”

As a former Mets player back in the 1970s, Shad Rolle, who doubled as one of the most outstanding baseball and softball players, said as long as Saunders stays focused, the sky is the limit for him.

“Once he gets his mental aspect down, he will be able to make it,” Rolle said. “It’s going to be a lot of mental stress, especially when you are in a slump and things are not going good. You just have to keep working at it and it’s going to come. Don’t try to change it. Just continue to work on what you were doing to get there.”

As the premier fast-pitch softball player in the country for more than two decades, Richard ‘the Lion-Heart’ Johnson said he was thrilled to have met Saunders for the first time as well.

“We got to talk. I’ve never been as far as this guy is going, but right off the bat I’m proud of him,” Johnson said. “I need this brother to make it. I don’t just need him to go one step. I need him to go into the majors and stay in the majors. You need to show them longevity. Show them that you belong there. This is bigger than him. It’s for the whole country. I don’t want to put any pressure on him, but I need him to make it. That’s the bottom line.”

While everybody is excited about all the festivities surrounding the Christmas holiday, Saunders said he will have to concentrate on working out and making sure that he is still fit and trim for next year.

“I will be going back to Freeport to train with my cousin Jervis ‘Champ’ Stuart, who just recently signed with the Mets and his father, my uncle, Jervis ‘007’ Stuart, who played professionally for the Orioles,” Saunders said.

“It’s a great head start for me working out with people who have been there before. They can help me with what I have to deal with. I think it’s a great honour to have people like them in my corner. They will definitely make it easier for me when I go on the circuit next year.”

Armbrister said the Reds have already predicted that Saunders could be the next Ed Armbrister, the first and only Bahamian to play in the Major League for the Reds from 1973-77.