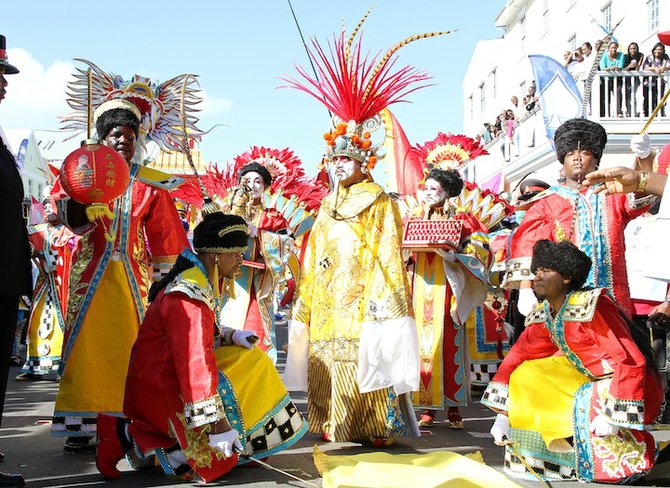 THE VALLEY Boys returned as unofficial champions of the 2013 Boxing Day Junkanoo Parade with Prime Minister Perry Christie as emperor.

Outfitted in a gold robe and traditional moustache, Mr Christie shuffled down Bay Street under the theme “From China to the Bahamas” to entertain thousands at the sold-out festival.

Edging out the Saxon Superstars and One Family by less than five points to snag top overall in the unofficial results, the Valley Boys’ parade also featured an impromptu dance from Chinese ambassador Yuan Guisen.

Superstars placed second overall under the theme ‘Taj Mahal: The jewel of India, and One Family placed third with the Bahamian theme ‘Ya born dere, Ya born dere’.

The Valley Boys won all sections, but the Music category, which was taken by One Family with a nine-point lead over their nearest rivals – the Saxons.

The parade faced heavy delays due to weather warnings, and as a result was limited to only two laps.

Last night, technical difficulties prevented officials from releasing the unofficial results for the B and D groups.

No group was disqualified from this year’s parade, according to Parade Management Committee Chairman Douglas Hanna, who added that late penalties made a significant impact on the overall results.

Many a truth said in jest. He wants to be emperor . May the plp dinasty will last 1,000 years.

Comrades night about now I got's this scratchiness in me head while I knows I must be kind. But the site of we Bahamalander PM as the Emperor of Red Communist China is one them things I an't so sure I can hold me tongue. I is wanting empty on him so damn bad that you have no clue as to all the ideas be bouncing around in me head. Some ain't exactly publishable.

So how do y'all feel being ruled by the Chinese? This is art imitating life.

lol, i hope the Punch acquires the right to this picture and puts it in the from page.

this is only matched by the one of ingraham donned in an oxford gown that graced the punch for several years. lol

Ya rush'in to da Junkanoo'ing beat alongside the Chinese Ambassador could be seen as a test as to the true identity of we Bahamaland's PM. One day Savior Jesus save we Bahamalanders from such wickedness. Please Jesus let someone have a video of the Ambassador rush'in to we Junkanoo beat. Comrade videographer your national duty demands uploading your video to You- tube now!

Hey, the women look like JAPANESE Geisha's and NOT anything from CHINA. What gives?

Only in Bahamalander you say can tourist see Black Chinese? One positive is in China there is no black racism cause there are no black people. OK if there is, they is Bahamalanders.

To all expectant PMs nothing is as important as the people you pick for your team, make sure they are talented, talent suits task, they have good work ethics and have all bought in to a single ethical objective. You will have the people cheering for 1000 laps.

By no stretch of the imagination do I believe he planned and executed any of this, there are some very talented people in the Valley who came up with the idea and saw it through. He showed up at the end to put on the efforts of their hard labour. The team, of which he was a part, won the day and that is what is important.

It is unfortunate that the one thing I can say he really did well this year was a complete charade, literally. I give him credit for it, I really wish he could somehow apply some lesson to real life, but after ~2yrs of nothing I am completely disillusioned.

Comrade Thisisours your post @ the Honourable PM is hereby nominated as the Tribune's Best Leadership Tips Blog Post for 2013.

Absolutely disgusting to see him dressed as a Chinese and to make a mockery of such a valued tradition in this country. How anyone can see this as OK is beyond me. The government in China must be laughing at the way they have a personal puppet.

I don't get why people are so shocked and outraged over the theme. I don't attend every parade but I've been going on and off for almost 20yrs and there have been many non Bahamian themes. (In fact, I'd almost bet the Tribune could dig up a past Asian theme). Junkanoo is art expression. The ability of the mind to conceive is not limited to things Bahamian, you can't place artists in a box, you would choke the very creativity you seek from them. If I went to an Asian festival and I saw a Bahamian theme depicted in a land where I least expected it, I would feel honoured, wow these people know something about my culture! and thought it interesting enough to put on this display etc. the only time that breaks down for me is if in some way the display was disrespectful and it must have been far from that., but then I'm not Asian, it's just the assessment coming from my Bahamian eyes. We've had many American themes before and I've never heard anyone say what a disgusting display of American culture...I appreciate the skill of the planners, designers, the construction artists, the choreographers the musicians (oh those drummers), the dancers and the team effort to bring this massive beautiful display together. Should Perry Chrisite have rushed? It's not even a question for me, he's Bahamian and like every other Bahamian, if he wants to and he has the ability, do it, you only go around once in this lifetime. Dance the Junkanoo.

If China is laughing at us surely it occurred under Hubert Ingraham's administration as well, we've been accepting their assistance for some time now. And check yourself, do they have anything worth laughing at? Our national D average and the propensity for the D averagers to decorate themselves in fancy trappings far above their means perhaps?

What is the murder count up to now?

Official? Should be 115 if none of those other guys passed away. Unofficial? Only the commiss and BJN know the true tale

Bahamaland is in need of strong leadership coming from the very top of government.. You go figure when two former law partners, one wanted be ya "Papa for Life" and the other ya Emperor are only two man's on local leadership scene. Yeah, "Papa for Life" is still awaiting he right time to leap from behind the red shirts leadership bushes. I really miss Hubert.

I would keep that graven image of the idolatrous gold calf Buddha statue that they used in the parade. I am a believer in Buddha. He is fat, smiling and happy and no one gets nailed to a cross to get saved. There is no hell with Buddha (it is your life on Earth if you don't shape up), and everyone is responsible for their own salvation called enlightenment.

I een superstitious, but money came my way in spades after I rubbed the fat stomach of that big fat green Buddha statue that used to sit outside the Chinese restaurant at the International Bazaar in Freeport. Jesus een send me nuttin'.

You probably just didn't trust Him enough. God's love is tried and proved. I didn't have to rub no-one's belly to bring me back from the brink of death when the doctors gave up on me...I only prayed to my heavenly Father and my survival stunned my own doctors. Miracles still happen. There is more to this life than money and God has blessed me to be a blessing to others no matter what amount of money I have. Merry CHRISTmas to you.