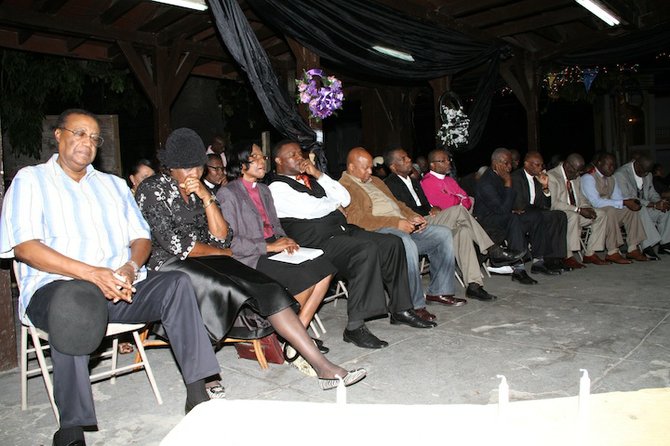 HUNDREDS of relatives, friends, and community leaders last night gathered for a prayer vigil after the deaths of four people killed in a drive-by shooting.

The scene was sombre, with loved ones openly sobbing as officials announced the names of the victims who are 49-year-old Eric Morrison, father of two, Claudzeno Davis, 37, Shequille Demeritte, 19, and 30-year-old Sheniqua Sands, a mother of two.

Fox Hill Member of Parliament Fred Mitchell promised those gathered that the authorities are committed to finding the four men responsible for the tragedy.

He said: “I thought it was important to try to draw the community together.  In unity there is strength.  We simply need to stand together.

“The police will find the perpetrators.  The responsible thing to do is to leave that in their hands. I am grateful to the Commissioner for the personal attention which he has paid to this. I have been in constant touch with the Minister of National Security and I thank him for his statements in support of the people here.

“The question for us is how do we turn disaster into opportunity. While we mourn, while the attention of the country is on us, we can mobilise the resources that have been denied us: to clean up our community, to rebuild our community.”

He added that communities throughout the Bahamas should focus its attention on securing the well being of citizens.

“There is now a need definitively for the community, not just Fox Hill to have a paradigm shift in attitude and thinking about security issues. This is no longer the small village the world described as quaint little Nassau.

“We have to adjust to the fact that in security issues we need new rules, a new attitude and a new way of looking and dealing with security issues. If we do not, we, as a society, will become sitting ducks of our own destruction.”

That wasn't a prayer vigil...that was a round table discussion to figure out who to whack next for revenge!!

Was it nice...no. Was it a harsh reality check...yes. We are not a God fearing nation, we are religious only when it serves our purpose. We live a life of sin, cheating, having kids out of wedlock, stealing, drugs, etc, and when it comes back to bite you in the backside, everyone breaks out the bible and starts praying...making them self look all pious. When family of a murdered loved one who was gunned down by a rival gang thug for maybe a retaliation of a previous murder, they are all screaming the lords name, oh lord, how could this happen, not my innocent angelic child...innocent and angelic my behind. You reap what you sow. Look to yourself and your actions first before begging for HIS forgiveness and think about what action and decisions you made in life that could have led to the fate that lay before your feet. (You are welcome John... ;-) )

Not all victims of crime "are reaping what they sowed".....some victims are innocent. Grow up...that was a stupid comment. These jokers are even robbing and raping people in church...you forgot the lady who was sexually assaulted cleaning the church...did she reap what she sowed????? So tell me should she think about what actions and decisions she made in life that led to her fate!!!...

So strange , i am not overtly religeous but do believe in spirituality ..However the clergy go on about damming people to hell and all kind of anti gay rhetoric when you have at least four gay /lesbian people sitting right on that stage ,,such hypocrites ,,,,,,,,,,,,,,,,,,i think some of them even protested the gay cruises ,,,

Though hand join in hand, the wicked shall not be unpunished: but the seed of the righteous shall be delivered.

Watched bankers link & while I am compassionate to the sufferring, religious rationalization will not help.. The bible itself talks about faith without works.. This is why nothing gets done & every time u try to get into a reason & logic conversation with many Bahamians they play the religious card. Karl Marx when he said Religion is the Opiate of the Mases was on point..