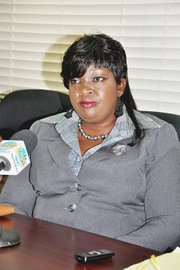 URBAN Renewal workers in Grand Bahama have been ordered to stop wearing work uniforms displaying PLP colours and reminded that they work on behalf of all Bahamians.

In a January 24 letter obtained by The Tribune, Urban Renewal coordinator Michelle Reckley was told that the programme’s co-chair, former Deputy Prime Minister Cynthia Pratt, was “disturbed” to see civilian officers dressed in yellow on the job.

The letter also conveyed Mrs Pratt’s disappointment at not being able to meet with Mrs Reckley during a visit to Grand Bahama.

“She understood that you were in Abaco campaigning for the “Yes” vote,” it said.

The letter also noted that in accordance with Prime Minister Christie’s wishes, the police are in charge of Urban Renewal in Grand Bahama, and emphasised that there is “no Urban Renewal without the police.”

While in Grand Bahama, Mrs Pratt assured the press that Mrs Reckley and the other civilians “will work along with the police”, it said.

“The directive was also given for the lead police officer in each Urban Renewal Centre to take charge as centre manager and be given the keys and FULL access to the centre.”

It added that from now on, all staff at each centre – both civilian and police – must report to and communicate through the centre manager, including when applying for leave.

“The centre manager will make all necessary recommendations to Inspector Rolle, who will approve, disapprove, delegate or redirect,” the letter said.

Mrs Reckley first made headlines as she defended her suitability for the job after opponents claimed the former PLP organiser has no relevant qualifications and last worked as a school caterer.

Mrs Reckley, the former Assistant Secretary General for the PLP in Grand Bahama said she was qualified because she has “lived” the problems that Urban Renewal was set up to address.

The FNM had claimed her appointment was purely political, saying they believe Mrs Reckley does not have the appropriate professional background or expertise to manage several Urban Renewal centres and a staff that includes police officers and social workers.

Mrs Reckley said: “What makes me qualified is that I come from urban. I have lived it and who else can appreciate Urban Renewal more than someone who has lived it?”

The director has not been seen nor heard from in quit some time, its as tho the cut hip she got in the referandumb and the recent tounge lashing by the good mother has put this erbin renural director deep deep underground , hope fully some of her workers in erbin renural will do as they are mandated and go into the hills and by ways and find the erbin renural director.

This is beyond insanity

This is what happens when you put ignant, unqualified people in charge...at least it looks like she has been stripped of any decision making power.

How about someone with a degree in urban planning? I wonder what innovative ideas such a qualified person could concoct? Maybe even support green technology in the process. Hmmm....here's hoping.

@Iron velvet, a degree in erbin plannin lol, surly you must be jesting ,then what would we do with those who tow the party line and would have lived erbin ??

You can try take a person out urban of a person but it's quite hard to take urban out of a person. Mamma always say "son, you can put a dress and perfume on a dog but he still a dog".

So she took time off from her job with Urban Renewal to go and campaign for another entity; she needs to be discipline hard. The PLP might have bee pushing the Yes vote, however, she is abusing her power, because this was more than likely on company time and the trip paid for by the government. Thank you Mother Pratt, these type of things needs to stop with goveernment employees.