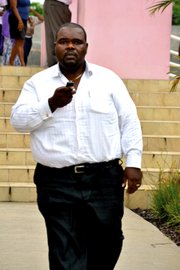 AN EMERGENCY room doctor facing claims of indecent assault must wait a few more weeks before learning whether the court feels he has a case to answer.

Dr Lynwood Brown, a 38-year-old physician at Doctors Hospital and former PLP candidate, pleaded not guilty to indecent assault in 2011. He will return to Magistrate’s Court on March 13.

He and his attorney Murrio Ducille appeared before Magistrate Guilimina Archer yesterday, when she was expected to rule on the “no-case submission” made by Mr Ducille in their last appearance before the court.

However, Magistrate Archer said that the stenographer’s notes are still outstanding and that she could not make a ruling on the submissions given on November 6, 2012. She said she had hoped the ruling would be ready by yesterday’s hearing. Brown is alleged to have indecently assaulted a woman on September 7, 2010. The trial began last July with the complainant and three other witnesses testifying.

Last November, Mr Ducille told the magistrate that in his and his client’s view, the prosecution had not made a sufficient case.

He referred to the evidence of the complainant, who testified that Dr Brown had fondled her breasts and when she told him to stop, said she was “petty and touchy”.

Mr Ducille also noted the evidence of two witnesses to the alleged incident. One claimed that during her time in the break room, prior to the complainant’s arrival, Dr Brown started making comments about their breasts, and the type of bra she was wearing.

She claimed he pulled the other woman’s blouse open and she pulled it back.

Mr Ducille noted that the prosecution’s case was based on the evidence of three witnesses who, according to the testimony of two of them, were all close friends.

The lawyer, having claimed a conflict of interest, also noted a discrepancy, in that the complainant told the court that she was not a friend of either witness.

He also noted that up to the time of the incident, based on the complainant’s testimony she and Dr Brown had never had any issues, having worked together for two years.

Mr Ducille noted that his client and the complainant, on the night in question, had an exchange of words regarding the treatment of a pregnant patient. Dr Brown reported the matter to his superiors in the hospital.

He also pointed to the evidence of a woman constable, who said under cross-examination that Dr Brown denied the alleged offence and maintained his innocence throughout his interview with police.

Mr Ducille said the prosecution failed to give a reason for the complainant denying her friendship with the witnesses who claimed to be close friends with her.

In response to the submissions, Calvin Seymour, sitting in for Ramona Farquharson-Seymour, noted that Mr Ducille had not indicated whether there was a discrepancy about the complainant’s breast being touched.

“This is not about the friendship but what took place in the break room,” Mr Seymour said.

He concluded that the evidence was sufficient for Dr Brown to have a case to answer.

what a porky piggy