Rbdf Gets Ready For Influx Of Immigrants 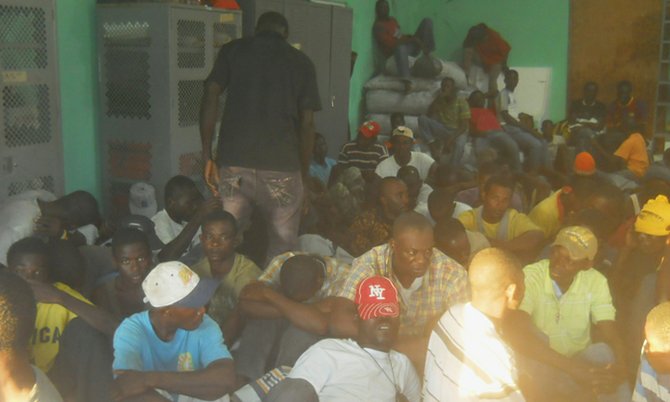 THE Royal Bahamas Defence Force is preparing for an possible influx of immigrants after more than 100 undocumented Haitians were detained in Bahamian waters in less than 48 hours.

RBDF public relations officer Lt Origin Deleveaux confirmed that 137 immigrants are being held in Great Inagua after being apprehended in two separate incidents.

A total of 44 Haitian migrants, 37 men, five women and two children, were found on board and were taken to Matthew Town, Inagua.

Less than 24 hours earlier, 93 Haitians were apprehended after their sloop ran aground off Sandy Point, Inagua.

Eighty-nine immigrants were found on board the wooden vessel and the remaining four were apprehended ashore on Wednesday morning after a search of the area.

Mr Deleveuax said the RBDF is prepared for the influx of immigrants as December through November is normally a “busy season”.

“During this time the weather is favourable because of the wind as it relates to the sailing sloops they use. But these type of movements are sporadic, it happens when the persons reach a point of desperation and take the trip. They save for long periods of time and wait for the right moment to take the journey,” he said.

“The months of November December and January are busy and then again around the summer time. But we have two bases in Inagua, two in Abaco and one in Exuma so we have the corners covered.

“It is difficult to pinpoint the type of vessels they come in on, in a large body of water but we are using aerial surveillance and it is working extremely well.”

Mr Deleveaux said the immigrants will be held in Matthew Town until they are repatriated.

"Mr Deleveuax said the RBDF is prepared for the influx of immigrants as December through November is normally a “busy season"." - really now?

this is just sad to see http://www.bartendertrainingsource.com/">bartender training source guide