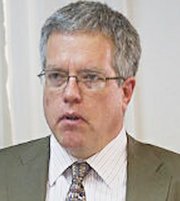 Canada’s newly-appointed Bahamas High Commissioner has “requested” that the Christie administration provide him with a report on the controversial Oceania Heights dispute, it has been disclosed.

Producing further evidence of Ottawa’s increasing interest in the affair, despite claims that it did not issue an investment advisory on this nation, a Canadian High Commission press release confirmed that Robert Ready raised the Oceania Heights matter with government officials when he visited Nassau last week to present his credentials to Prime Minister Perry Christie.

The release said: “Mr Ready raised a number of areas of bilateral interest including trade, air transport and security.

“He also requested an update from Bahamian authorities on the situation surrounding the Oceania Heights real estate issue.”

Oceania Heights homeowners, who have been embroiled in an increasingly bitter battle with the community’s deveiopers, Canadian citizen Howard Obront and Bahamian attorney Anthony Thompson, are waiting to hear from Deputy Prime Minister Philip Davies, who met with the developer’s attorneys some two weeks ago.

They are waiting to assess any compromise offers coming from the developers.

Tribune Business revealed last year that complaints by some homeowners at Oceania Heights had prompted the Canadian government to issue an investment advisory on Bahamian real estate transactions, warning that any disputes “could be prolonged and costly to resolve”.

Among the complaints advanced by several Oceania Heights homeowners are difficulties with obtaining title documents to their properties, and that Stamp Duty payments due to the Treasury on lot sales - and which they made to Mr Thompson for passing on - have not been made.

Other alleged grievances are that Mr Thompson, while representing both purchaser and vendor (the Oceania Group of Companies) in the real estate transaction, did not pre-disclose that he had a beneficial ownership interest in the development.

This, as with all other claims, has been vehemently denied by Mr Thompson and the Obronts.

Kudos to the Canadian officials for trying to do something about the rampant and damaging investment issues in Exuma. But I have a feeling they will soon learn that in the Bahamas massive fraud and coercion are not serious crimes but are just "civil matters" and that tax evasion is just a bonus for being able to afford a high powered lawyer. Unless you are a Bahamian citizen, you should never EVER invest in this corrupt nation.