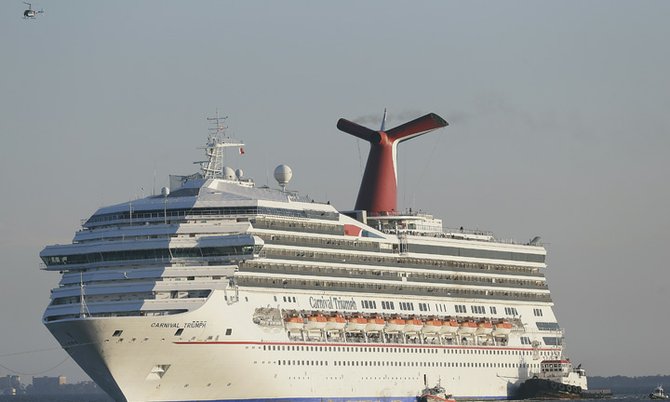 A TEAM of detectives from the capital flew into Galveston, Texas, yesterday to investigate an alleged sexual assault that occurred on the Carnival Triumph, The Tribune has learned.

The Triumph, a Bahamian flagged vessel, made port in Mobile, Alabama on Thursday after what should have been an idyllic four-day cruise turned into a grueling week-long ordeal for more than 3,000 passengers and 1,000 crew.

The 13-storey, 272 metre liner set off from Galveston on February 7 and was without power when an engine caught fire two days later.

After the boat was towed into port on Thursday, the passengers were bused back to Galveston, where many of them had parked their cars or shuttled to other buses to return home.

While the Bahamas Maritime Authority is leading the investigation into what caused the fire, detectives from the Royal Bahamas Police Force are also investigating a sexual offence claim, Assistant Commissioner of Police Anthony Ferguson said yesterday.

“We send some officers to Texas to head up the investigation. The ship is a Bahamian Flag Ship so wherever something happens we have to tend it. The officers went over there this morning and should be back sometime tomorrow. They are investigating a sexual offence matter that happened on the cruise. We should have some more information tomorrow on the matter.”

A statement is also expected from the Maritime Authority, according to London Representative Dwain Hutchinson. He said an investigation is underway and a statement will be released to the press “soon”.

Many of the passengers slept on the deck in the absence of air-conditioning, electricity and working toilets. They had to use showers, sinks and plastic bags instead of bathrooms. After drifting in the Gulf of Mexico, the Carnival Triumph was intercepted by tugboats last week and towed into port — three days after it was due.

The cruise line said it would give each passengers $500, a free flight home, a full refund on their trip and for most expenses on board as well as credit for another cruise.

At the time of the fire, the vessel was carrying 4,229 passengers.

You knew this was coming, didn't you? What next? Anything to increase the butcher's bill.