UPDATE: Students have met with minister 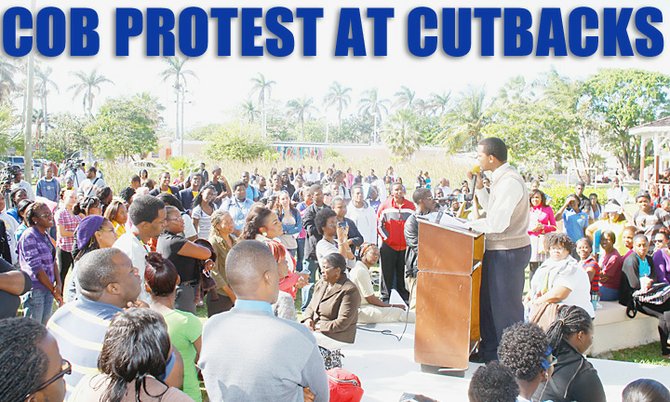 UPDATE: COB students met with Minister of Education Jerome Fitzgerald this morning at the Ministry of Education and are presently marching back to campus to speak with the college's president.

More on this update as information comes in to the newsroom.

THE proposed funding cuts at the College of the Bahamas will not affect the quality of education offered by the institution, according to the government.

If any subsidies are cut, the reductions will most likely be seen in allowances for things like travel, rent, utilities, printing, supplies, materials and special financial transactions, Education Minister Jerome Fitzgerald said.

While the government has proposed that ministries could see a 10 per cent cut this year and 25 per cent the next, Mr Fitzgerald said COB has been asked to cut around $2.5 million.

It is expected that the money would come from improvements to operational efficiencies and other strategies for cost saving.

He claimed that no imposed reduction was planned to affect a quality or level of service to the public.

Mr Fitzgerald’s clarification came in an afternoon press release after the College of the Bahamas’ Union of Students (COBUS) threatened to sit out from classes and stage a demonstration if the government proceeded with cuts to COB’s budget.

“It was made clear,” the statement said, “in the letter of 20th December, 2012, the Ministry of Finance and the Ministry of Education, Science and Technology has absolutely no intention of reducing subventions to the College of The Bahamas that would cause a reduction in quality or level of services to the public or any forced reduction in head count.

“As Minister of Education, I accept my responsibility to ensure that my Ministry minimises waste, improve efficiencies and reorganise our priorities to ensure that we are able to effectively match the demands of the Ministry of Education Science and Technology.”

The students were also up in arms over a proposed hike in tuition costs that they claimed were unwarranted while conditions at the college continue to deteriorate.

COBUS President Ernesto Williams told the around 250 students gathered at the campus’ Independence Park that they would continue to fight for the interests of the student body despite challenges by senior administration at COB.

Among their concerns are a rodent infestation, union agreements which have yet to be signed, unexplained and misguided fees including the drop and add fee, and classrooms and infrastructure that are not maintained among other things.

Mr Williams further believes that COB’s administration is attempting to keep students uninformed of the extent to which they will be affected by a set of proposed cost effective initiatives. He faces action by COB’s board for disseminating a power point presentation by COB president Dr Betsy Vogel Boze with that information.

Her proposals included, according to Mr Williams, placing a moratorium or a suspension on hiring non critical positions, aligning contact hours with credit hours and closing programmes with very few students in them.

Dr Vogel Boze has said that it would be very challenging to move to university status while the organisation faces cuts to subsidies. She said while the college is trying to protect their staff and students, the plan moving forward has yet to be set in stone.

A group of students was expected to march to the Ministry of Education this morning where a meeting with Mr Fitzgerald was planned to begin at 9am.

and somehow this Ingraham's fault. right?

There is so much wrong with COB from the top on down. People complain about COB's fees, but these fees are much lower than most private high schools in the Bahamas. People complain about not having the proper faculty to teach the courses, how about raising enough money in order to attract appropriate level professors. The students complain about the fees and other costs, how many alumni donate money to the school's endowment? Is there even an endowment set up?

University status? These people have got to be kidding.

Looking to save money....look to the financiers that run COB, make sure you check their pockets on the way out daily because that's where the money is going. Stealing is rampant in that place.

The nepotism that goes on in that place is unbelievable! And research? get a life! COB has run off some of most talented young Bahamians with PhDs I've ever seen. They have run them off and frustrate them due to the envy that they could never be as good as those coming home. They delay paying a new employee for months on end and sabotage any research capabilities.

Most of the students there are the same ones with D and F averages on the BGCSE. Most of them should be looking for trade schools. I'd challenge you to find the majority of them with actual high school diplomas, again many have certificates. Just the last night on the news a girl is complaining about having to maintain a minimum of 12 credits in a semester to maintain her scholarship, my dear that is a basic level college course load. And college prep, that has no room in a proper college/university.

COB needs a major overhaul! The government's cuts, should be the last thing people complain about and the government should not be the major contributor to the college anyway. If they want the school to be a state run school then fine, continue to protest the government's cuts, but allow the government to have a say. COB wants to run itself as private institution without acknowledging the help from government that they need to survive. I have never in my life heard of students on full scholarships, receiving a stipend, and only being asked to maintain a 3.0 GPA. COB and the government want to upgrade to world status...hmpf! They all need a reality check. A world class education is expensive, this is the complaint of the world.

I could go on, but alas this is getting to be too long.

COB certainly has its evolving problems - much of it, is frustrating to the student body; in ways plausibly, that affects their performance. When you cut money away from operational costs; its ridicules to believe it would not affect the overall status. What ought to happen - is, a reconstruction of the college administrative apparatus that would generate more efficient and coherent structure of the faculty - resulting in a higher academic performance from students. It is understandable the government has to cut its budget in this economy. However, higher education as with COB ought to be increased; reason being the strategic nature of higher education that would yield a better performance in the overall economy. One of our most important strategic interest must be education - and so the minister ought to be lobbing the cabinet for an increase in his budget instead of cuts! Similarly as with COB the government too has a problem identifying the nation priorities. Don't be daft it is about education after all!

One way to cut costs would be to make professors teach more hours. They only teach 12 hours per week.

The rest of the time is supposed to be research, but most of the research produced are opinion polls which statistical methods don't pass muster: Bad, sampling, bad statistics, not to mention when the subject of investigation is outrageously irrelevant.

I have read the utter nonsense with regard to the College of the Bahamas. While the sentiments seems as though someone has a very personal axe to grind or some other bias.

The qualification to enter the College of the Bahamas is 5 BGCSE's with C and above. So how someone can just state totally inaccurate foolishness with something that is easily verifiable is really sad. Do not disrespect the students present, former ad future with such drivel.

I am a proud former graduate, one of literally thousands and a former employee. So I am very familiar of matters related to the institution.

I do agree that COB tuition fees are lower in comparison to private institutions in the US, but I would suggest you take deeper look at tuition cost for state and juniour colleges. While you are at it review the cost for Canadian, European and Asian institutions for their citizens; then come back and let us know if there is some significant difference.

I'm stating what high admnistrative officials and professors tell you behind closed doors. I have no axe against COB, but everyone is entitled to their own opinion.

The overall budget at COB ought to be cut by 70%. Bachelor and Associate degrees are a waste of time for anyone in the Bahamas - and for many in the USA. WHAT job/s are you going to get with one?

There are NO JOBS and no prospect of any jobs for many years to come. So what the heck does anyone need a degree in anything for?

The ONLY COURSE offerings at COB ought to be introductory, intermediate, and advanced Mandarin Chinese language courses. Maybe a few weekend courses in Creole. That's it. If you want to work in the Bahamas - you've got to learn to speak the national languages.

High level finance, accounting, engineering, Supreme & Appeals Court, hotel management, etc. etc. etc. are all reserved for foreigners - and that is still even irrelevant because the numbers of such jobs is trivial overall.

Learn to install and/or unclog a toilet and you MIGHT get a job, if you have connections.