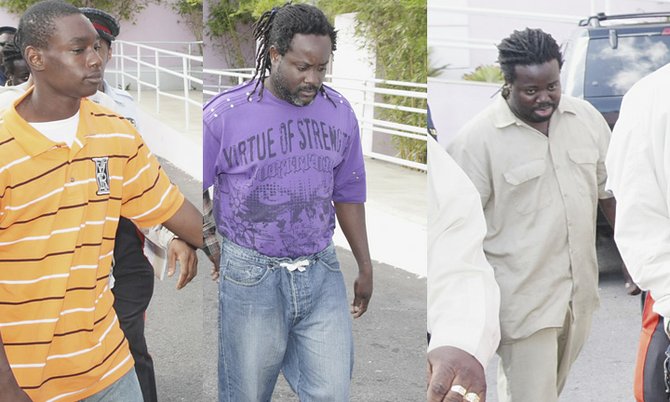 A MAN accused of being behind a string of break-ins over the past ten months was arraigned in Magistrate’s Court along with other men charged with being in unlawful possession of potential stolen goods.

Cunningham, who was supporting his right elbow with his left hand and a bloody tissue, complained that he was brutalised by police while in custody.

Deputy Chief Magistrate Bethell made a note of the complaint before arraigning him on the charges.

It is first claimed that on April 16, 2012, he broke into a Constitution Drive home and stole $950 worth of jewellery and electronics belonging to the male owner of that property.

It is claimed that on October 29, 2012, he broke into the Baillou Hill Road South home of a woman and stole five pairs of shoes and three dress shirts, together valued at $920.

It is claimed that he came back to the same home three days later, on November 1, and stole an XBox and assorted games and two cell phones, together valued at $930.

It is also claimed that he attempted to break and enter a home in his own subdivision on November 7. The next two housebreakings he is accused of occurred on February 15 and February 19 of this year.

He is also accused of receiving these items. It is lastly claimed that on Feburary 19, he broke into a Domingo Height Estates home and stole a Nokia cellphone.

Cunningham pleaded not guilty to all of the charges and elected to be tried in Magistrate’s Court. He will return to court today before Magistrate Derence Rolle-Davis to receive a date for trial and a bail hearing. Following his arraignment, three other men were separately arraigned on a charge of unlawful possession. All of them pleaded not guilty.

Jocelyn Emmanuel, 31, of Butler Street is accused of being in unlawful possession of an assortment of lap-tops, flash drives and electronic cards on the same day.

They were remanded into custody until they appear before Magistrate Rolle-Davis to receive a trial date and apply for bail.