Dj Of The Week: Dj Pressure 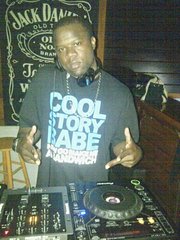 DJ Pressure’s early appreciation for music came in his teenage years under the guidance of a more experienced group called Spin Tech. After branching into his own light he joined the 100 JAMZ team in 2008, where he still serves up his infamous “gwala gwala” every day from 12 to 1 pm on “Eat To Da Beat.” Christopher “DJ Pressure” Williams told In Ya Ear, becoming a deejay was somewhat of a rites of passage for him. With his cousin, the Mighty Pencil, being a well known deejay he learned most of what he knows from understudying. “Not to say that I love music, but I thought it was entertaining and I like to entertain people so I decided to become a deejay,” he said. Since coming into his own, DJ Pressure has been a regular on the party scene. He appreciates every gig for it allows him to do what he loves.

The celebrations that stand out the most to DJ Pressure are the Family Island regattas. He compares the festivities to “mardi gras.” DJ Pressure said most people do not know he started off with the street name “DJ Rusty.” He said it was his uncle who came up with the name DJ Pressure, due to a personal situation. After his start at Jamz in 2008, DJ Pressure said he began doing the station’s Sunday show. He later joined Natural Empress on the daily Eat To Da Beat session. “The experience at Jamz is wonderful because you get to interact with different deejays and different entertainers. You begin to incorporate a lot of things that you learn into what you do,” he said. “I often take styles from things I see, and end up putting it into my personal style, and just create me,” said DJ Pressure. He said there are many deejays who inspire him, including Pencil, Butcha, Pusha, Ty and the whole Jamz dynasty. “People give me the drive to keep on pushing forward because even though I am on stage or behind the booth playing, the way they react to the music brings a joy. That is how I feel,” he said. While he has never played outside the Bahamas, DJ Pressure said it is definitely something he is working towards.

“The biggest events I have played to in the Bahamas are concerts. The latest concert I played at was Rick Ross, and it was great. DJ Fines and I juggled together along with the Dynasty, but we also did a set together so it was great,” said DJ Pressure. For deejays to remain current, he said they have to stay current with the people.

“That is the bottom line because you can be an R&B deejay, but if the people in the streets or elsewhere are into that Reggae or Soca vibe, your R&B wouldn’t make any sense. You just cant limit yourself to just playing one kind of music type,” he said. “Deejays should listen and pay attention. That is the only advice that I can give them, because a lot of them want the fame and the name, but they do not want to work for it. Most of them can’t take criticism, so all I can say is listen,” said DJ Pressure. Some deejays want to spin records, but they do not want to work on perfecting their craft, he said. This is why there are one-hit wonder deejays.

“You can hear their name now, but in the next few months, you don’t hear anything about them. That is because they get that little spark and they run with it. Their ego take control and that is that,” he added. He said deejays and local artists should also connect more often. “I say that because, you have a lot of good artists out there, but they don’t connect with the deejay in giving out their music. It is all about connection. If you have a good song, you have to give your music to deejays,” he said.