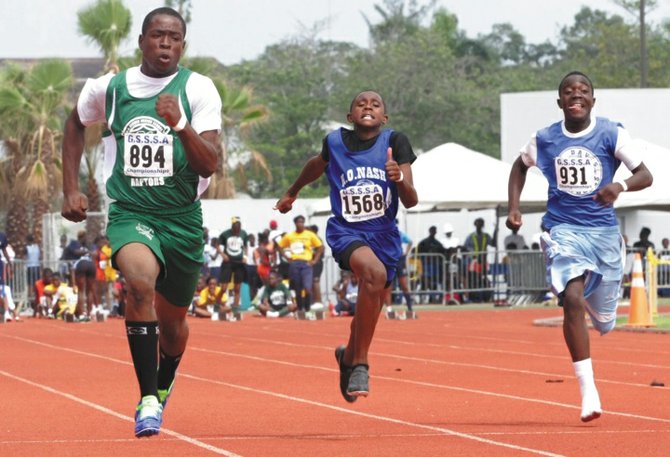 Unofficial scores placed the Raptors nearly 150 points ahead of their nearest competitors as the two-day meet concluded yesterday afternoon at the new Thomas A Robinson National Stadium. It was the fifth consecutive championship win for the Raptors since the perennial powerhouse surprisingly surrendered the title to LW Young in 2008.

With the finals of few field events still outstanding, the Raptors posted a total of 630 points, followed by the TA Thompson Scorpions with 526.50 points.

The SC McPherson Sharks finished third with 479 points, AF Addereley was fourth with 382.50 points, while HO Nash rounded out the top five with 299.50 points.

The Raptors had several standout performances, particularly in the short sprints. Oneika Rolle and Tomico Jolly-McKinney led the surge for CH Reeves as both finished with the sprint double crown in their respective divisions.

“It was okay. I saw the guy coming behind me, so I just decided to speed up,” said Jolly-McKinney, a seventh grader.

In the field, the versatile Dawson Scavella was prominent on the medal podium in all three jump events.

Scavella also finished second in the long jump with a 4.83m jump, just behind Anatol Rodgers’ Tyrik Thurston with a leap of 4.84m.

In the Intermediate Boys division, Tamar Green of TA Thompson took the long jump with a jump of 5.64m and easily took the triple jump with a 13.47m attempt.

In the same division, his teammate Anton Davis dominated the throws with a 11.19m toss in the shot put and 33.79m in the discus, both first place finishes.

The senior version of the championship is scheduled to pick up today and continue on Friday. And the CR Walker Knights will be out to defend their title.