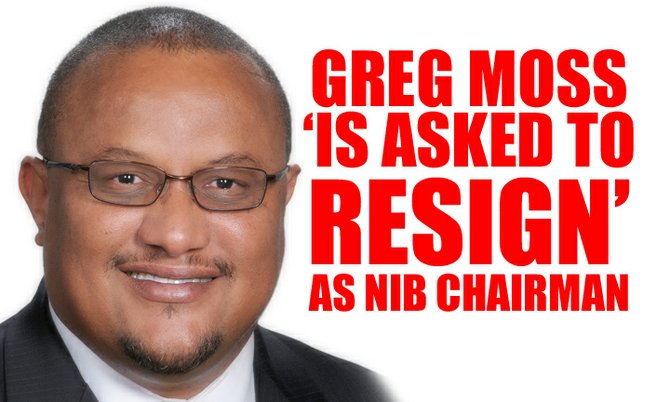 PRIME Minister Perry Christie has demanded the resignation of the Chairman of the National Insurance Board, Gregory Moss, The Tribune understands.

Well-placed sources confirmed that the letter from the Office of the Prime Minister has been sent to Mr Moss’s office in Grand Bahama.

If Mr Moss does not answer the letter by the end of the day, The Tribune understands that the Minister with responsibility for National Insurance, Shane Gibson, will be forced to fire Mr Moss, who also serves at the PLP’s Member of Parliament for Marco City.

This move comes after Mr Moss published a press statement on his Facebook page where he hit out at the Prime Minister, stating that he did in fact still have the NIB issued credit card that Mr Christie had assured the public he no longer had.

Speaking with The Tribune yesterday, Minister Gibson said that he was “extremely disappointed” when he read Mr Moss’ comments.

"I think the only difference was that he never turned it in, but he was instructed not to use it until after the forensic audit at NIB”.

Mr Gibson said he was also distressed by Mr Moss’ remarks as the chairman was instructed to avoid speaking on the matter by a court injunction taken out and agreed to by NIB’s now suspended Director Algernon Cargill.

“So when you look at that, and the forensic audit it would be totally inappropriate for him to speak to that.”

Mr Gibson said that he has since instructed the National Insurance Board to cancel both credit cards that the Board has until they can properly develop a “policy of credit card use” for them at NIB.

With Mr Moss’ impending resignation, and the fact that the Board’s Director is on suspension, Mr Gibson assured the public that NIB’s day-to-day functions will not be hampered.

“The day to day running of the Board is done and supervised by the management. The Board of directors met once a month. The day-to-day is done by the executives and the staff at NIB. Moss was not an executive chairman,” he said.

Mr Gibson said he will not be stepping in to play a larger roll with the Board at this time saying it was “unnecessary” for him to do so.

When contacted by The Tribune yesterday, Mr Moss said that he had “absolutely nothing to say” on the matter.

However, in his statement on Tuesday, he said: "My conscience is clear as is my resolution that should it ever be determined that my services as Chairman of NIB are no longer required, then it will be my honour to continue to serve the people of Marco City and the wider Bahamas from my seat in Parliament."

Up until press time last night, the government had yet to release a statement on Mr Moss.

shame and scandal in the PLP, nothing new!...so what else is going on in the country

Sorry Apostle but the on thign the PM does not have and frankly has never had is a good handle on his senior ministers. PGC is still the weakest most inept leader this independent Bahamas has ever had. We need leadership, we need another HAI in our PM office...

If Moss didn't release his arrogant statement and embarrass Christie he would never been asked to resign.

Like dey say, when you dig one ditch, dig two. He dug one for Cargil, now he in one too.

Mr Moss’ letter clearly shows that the leadership team of the National Insurance Board is ineffective, motivated by self-interest, and incapable of maintaining the public trust. 1. It was acceptable for Mr Moss to contribute to and allow the vilification of my brother; however, Mr Moss only became concerned about vilification when he believed it was happening to him. How can any person be deemed an effective leader when he or she can only relate to events based on personal experience and not based on justice, the law, the public trust or the greater good? 2. Mr Moss mentioned a relationship with God in the same context as his support of the philosophy of the PLP, and that his press statement would be forecasted and colored by this relationship. It is fundamentally impossible to be loyal to God and a political party simultaneously. Loyalty to God necessitates that one subjugate the law of the land and definitely ones loyalty to a political party to the greatest law of God – the law of unconditional love. The law of God is grounded in true justice, unconditional love and pursuit of the greater good – no matter the consequence. Clearly, Mr Moss elevated his personal reputation, his position in the Parliament and his role in the Party above the law of God; therefore, Mr Moss lives both in the world and of the world.
3. Mr Moss’ self declaration of being a nationalist is questionable, at best. Attacks on my brother’s character and reputation, coupled with the Bahamas’ resources spent to investigate an honest man are clearly contrary to the national good. After an initial internal audit revealed that my brother had done nothing wrong, a more detailed/forensic audit was commissioned which I know will also show that my brother did nothing wrong. What is the cost the Bahamian public will pay for this forensic audit and who is conducting the audit? I am prayerful that NIB contracted with a Bahamian auditing company so that at least Bahamian funds will remain in the country. Also, what has it cost the country (in time, money, resources, and opportunity cost) to investigate my brother? The removal of my brother during a period when his effective leadership led to growth and accountability at NIB also cost the country. Mr. Moss and his cohorts need to stop talking about being nationalists and start actually putting the country first. 4. Mr Moss used my brother’s name when he stated that he received an NIB credit card from my brother. He neglected to state that he received the credit card from my brother after he ordered that my brother get him the credit card. My brother merely complied with the demand from his supervisor.

Them crabs still climbing in the cage.

Misappropriating,mismanagement is a bunch of bull,STEALING is what i call it! The N.I.B funds is the Bahamian peoples', and not for whomever to do with as they see fit. Mr. neck tie man living high of (MY),THE BAHAMIAN PEOPLE money while I can barely make ends meet. The ordinary bahamian citizen would of been hauled before the courts about now for the blatent misuse of companies funds,so being that the monies that were being misappropriated is (MY) the Bahamian people money, means that whomever was stealing from me and i want to press charges;and the right hon P.G.C being the representative of the people is obligated to do as the Bahamian people wish. (Arrest the guilty party/ies without delay!) ,LOCK THEM UP NOW!!!!!

Now real_talk, do you seriously believe that even after this so-called "audit" that if a case was found for misappropriating our (the Bahamian people's) funds, that anyone will be arrested and hauled before the courts? Me thinks not! History has shown that Bahamian crookedry at its highest levels is never ever dealt with. We are fooling ourselves if we think otherwise. But I leave a very tiny window of hope for this Government to shock me.