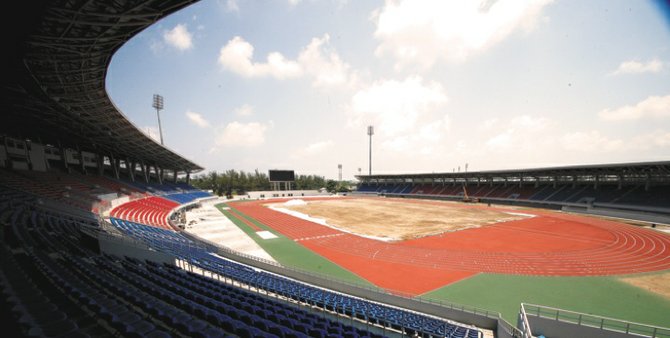 Bahamas Association of Athletic Associations (BAAA) has announced that its Odd Distance Track and Field Meet’s 2013 edition will be staged in the new 15,000-seat Thomas A Robinson Track & Field stadium.

And while the Ministry of Youth, Sports and Culture and the National Sports Authority are still waiting on the certification from the International Amateur Athletic Federation, the BAAA has been granted permission to host the meet in the stadium, starting 3pm Saturday.

BAAA public relations officer Tonique Williams said as they prepare to launch the season, they have a line-up that will include some 25 local and international meets, including the Carifta Games over the Easter holiday weekend (March 29-31) and the first Chris Brown Track and Field Invitational set for Saturday, April 13.

“This meet is really the launch of our track and field calendar because from the juniors to the seniors, who are still home for the Christmas, will be competing in this meet this weekend,” Williams

Events from the 75, 150, 250, 350, 500, 600 and 1,000 metres will be contested on the track, while the shot put, discus and javelin throws and the long, high and triple jumps will be staged on the field using a standing and shorter approach respectively from the under-7 age groups to the open division in both the male and female divisions.

With about 83 days left before the staging of the Carifta Games, Williams said the clock is already ticking and the athletes are eager to get started in competition.

BAAA president Mike Sands said they are looking forward to the start of the season on Saturday.

“We have officially started our countdown for Carifta and we are calling this meet odd distance, which means that we don’t run the traditional meets, so we are running the odd distance events and the throws will be from a standing position, while the jumps will be from a shorter approach, which imitates indoors, but it is a fun meet,” he said. “An athlete who is a 400 metre runner may run in a 300 or 500 event or a 600 event.”

More than 400 athletes have registered so far to participate in the meet as the BAAA begins the road to Carifta 2013. It is anticipated that some athletes from Grand Bahama, as well as the Family Islands,

“Because the odd distance is not qualifying events, we are satisfied that the certification of the track is not necessarily required,” Sands said. “But like we say that for the hosting of the Carifta

Games, the track only needs a minimum certification and we have been assured by the Ministry of Youth, Sports and Culture and the National Sports Authority that the certification will be done by then.

In the meantime, Sands said the reason they are using the new stadium for the odd distance meet is because the old Thomas A Robinson Stadium is being repaired so that it can be brought up to standard to

be used as a practice track and also the warm up track for the Carifta Games.

Sands expressed his gratitude to both the ministry and the NSA for allowing them access into the new stadium. Williams said this is a good opportunity for those persons who wanted to see a meet in the new 15,000 seat stadium to do so.