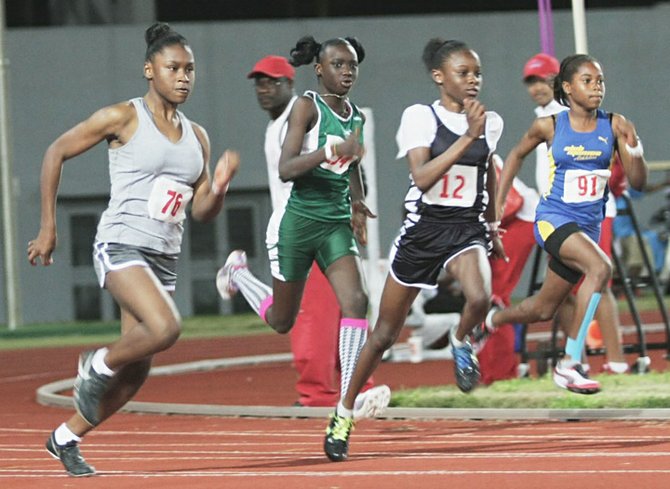 The event officially kicked off the Bahamas Association of Athletic Associations’ 2013 season and christened the new Thomas A Robinson Track and Field Stadium that is preparing to host the Carifta Games at the end of March (over the Easter holiday weekend).

While the meet was designed to provide the coaches and the athletes with an opportunity to see the progress they have made during the offseason, it was a test run for the BAAA to use the facility after the old Thomas A Robinson stadium was closed for renovations.

Although there was the usual crowd of spectators in the stands, BAAA president Mike Sands said he’s confident that they can fill the 15,000 seat arena when they complete all of their advertising and marketing for the Carifta Games.

“I’m not concerned about filling the stadium right now,” said Sands about the attendance at the meet. “We feel that with the support from the Jamaican and the Haitian diaspora, we will fill the stadium. Our concern right now is to make sure that our athletes are ready for the challenge that lays ahead of them.”

The athletes competing in the meet are not just preparing for the Carifta Games for junior athletes, but the senior athletes are also gearing up for the International Amateur Athletic Federation (IAAF) World Championships set to be held in August in Russia.

For the most part, the athletes were thrilled to have participated on the new track. “I felt good about it. I really did what my coach told me to do, which was to go out there and take the lead and protect it and finish up at the 150,” said Glen Knowles after he won the boys’ 1,000 metres in three minutes and 5.82 seconds.

Knowles, a member of Club Monica, said after he saw one of the competitors trying to out-sprint him with one more lap to go, he just kept his composure.

“It was hard,” said the 13-year-old student of St Augustine’s College. “The track was bouncy.”

For College of the Bahamas student Itsa Smith, the track felt good. “Running on this track and feeling the competition was a good experience,” said Smith of Alliance Athletics after she took the women’s 1,000 in 3:12.60. “I’m still running up to mid-season where my main focus is getting ready to run the 800 and lowering my time.”

Thompson, a 16-year-old 11th grade student at Queen’s College, is working her way back and was thrilled to be competing on the new track.

“I just did what my coach told me to do, which was to get out and finish strong,” Thompson said. “The track feels good. I’m just happy to be back out there.”

Lesley Dorceval, also trying to regain his old form after a brief hiatus, took the men’s 1,000 in 2:37.47 in a race that saw young Darren Young slip and fall coming off the final bend, but still managed to get back up to finish in 3:02.63.

“My goal this year is Moscow. I want to make the 4 x 400 relay team and also be one of the first Caribbean athletes to beat one of the Africans in the 800,” Dorceval said. “It just feels so nice to be back. I miss it a whole lot. I was waiting to run on this from when they first was building this, so it feels nice to be feeling it out.”

Young, the 16-year-old 11th grader at Queen’s College, said he got caught in a trap and he fell. “I was a bit disappointed in my performance, but I was glad to be on this new track,” he said. “It’s a very fast track and it’s very competitive.”

Godfrey Arthur of High Performance Track Club won his heat of the U-15 boys 300m in 39.97, but he was fourth overall behind Fast Forward Athletics’ Kaze Poitier, who posted the fastest time of 37.44.

“It could be better,” said Arthur about his performance. “But the track is pretty good.”

Shauntae Miller, the older sister of Shaunae Miller, won her heat of the women’s open 300 in 42.16. But she had to settle for third overall in the combined races won by Raygene Minus of the Bahamas High Performance in 41.50. “It was okay. I just executed the plan which my coach told me to do,” Miller said.

“I’m very comfortable, especially competing on the new track. It was pretty good.”

Carlos Outten, a member of the High Performance Track Club, won his heat of the under-17 boys 300 in 37.32. The top performance came from Fast Forward Athletics’ Cameron Oliver in 36.66.

“During the race, all I was thinking about was God and how I could apply power and speed so that I don’t tighten up as I go through the race,” Outten said. “I know I’m the best and I accomplished what I wanted to. I give all my success to God.”

The next event on the BAAA calendar is the T-Bird Track Club’s meet that is slated to be held at the Grand Bahama Sports Complex on Friday and Saturday. The meet has been moved there because none of the Thomas A Robinson Stadiums are available for use.

The renovations to the stadium are expected to be completed in time for the Dianna Lynn Thompson Classic that is scheduled to be hosted by the Road Runners January 18-19.

I wish I could run on the new bouncy track. Too bad it wasn't around during my track glory days. Enjoy youngsters!