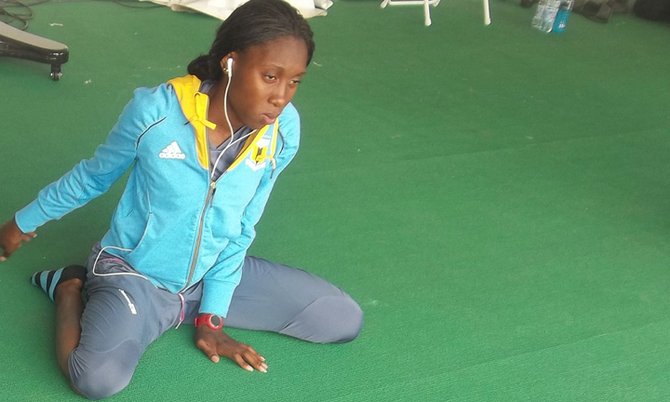 Highly acclaimed sprinter Anthonique Strachan finds herself in a unique situation as she joggles her time in school while preparing to compete professionally on the track and field circuit.

Strachan, the IAAF Junior World Junior Championships’ double gold medallist in the women’s 100 and 200 metres in Barcelona, Spain, after her double dose of victory at the Carifta Games in Hamilton, Bermuda last year, has enrolled in Southern Union State Community College in Opelika, Alabama, just 20 minutes outside of her training site at Auburn University.

As the school has no track and field programme, Strachan will only be concentrating on her studies at Southern Union where she has not yet committed to a major.

When she’s not in school with her classes scheduled for the evenings, Strachan will be training at Auburn University under the guidance of coach Henry Rolle in preparation for her pro debut in April.

Rolle said it’s something new for a Bahamian track and field athlete. “She can still accomplish her goals academically and she can still pursue her athletic career,” Rolle said. “She is now comfortable in doing things in her own realm where she can go through school at her own pace and in the meantime she can run track professionally.

“We might just do one indoor meet in February just to see where she’s at, but we won’t do anything until late March early April. Her season, however, won’t really kick off until after she completes her first semester in May. So she has time to get prepared for the season.”

As for her training, Rolle said it’s going quite well. “She’s finished with high school, so it’s just a matter of seeing how well she can adjust. This first semester will give me an idea of how well she is capable of doing,” he said. “In the fall, I will make some more assessments of her. I will give her a heavier load since she won’t be going to school.

After posting another double dose of victory at the World Junior Championships in Barcelona, Strachan went on to make her debut at the Olympic Games in London, England where she advanced to the semifinal of the women’s 200 metres, finishing fifth in her heat.

Strachan, who has ran personal best times of 11.20 and 22.53 seconds respectively in the two sprinting events, was eventually named as the Female Rising Star at the IAAF’s Athletes of the Year Awards ceremony held in November in Barcelona.

Then in December, Strachan returned home to attend the Bahamas Association of Athletic Associations’ gala awards ceremony at the Sheraton Nassau Beach Resort.

In an interview at the ceremony, Strachan said she’s excited about her future.

“I will continue training because I’m no longer a junior athlete,” Strachan said. “Next August I will be turning 20, so I have no more junior years. But I’m hoping to really do some good times now that I’m going to be turning pro. As a senior, I am expecting to do a lot better because the competition is definitely going to push me further ahead.”

Strachan was unavailable for comments as she was preparing for the start of school yesterday. But she did indicate in December that her focus will be on getting ready to compete in her second appearance at the IAAF World Championships in Moscow, Russia, August 10-18.

“It’s too early to start looking at any times that I would like to achieve (this year),” Strachan said. “I am just excited that I will be going to school and competing as a professional athlete at the same time. It’s something that I always dream about doing and it’s now becoming a reality.”

Strachan, according to Rolle, is now a part of the Bahamian connection that includes sprinters V’Alonee Robinson and Nivea Smith, who are in their junior and senior years at Auburn University, along with long jumper Bianca Stuart and triple jumper Leevan ‘Superman’ Sands, who is recuperating from surgery after injuring himself at the Olympics.