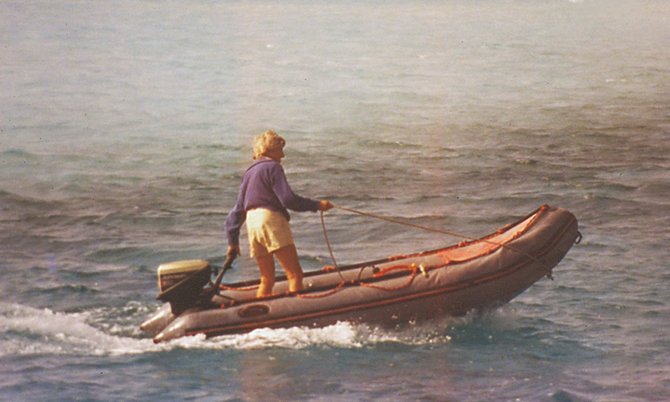 She never married and truly embodied the spirit of a modern 20th century woman with her sense of independence, entrepreneurial spirit, business savvy and wicked sense of humour.

The history of conservation in the Bahamas was changed forever when, at age 61, after a full life as a single woman in charge of Nassau Plastics Company, Peggy took over as Park Warden for the Exuma Cays Land and Sea Park and declared it the first “No Take” preserve in the Bahamas.

Peggy was born on November 29, 1923, at Narrow Water Castle in Warronpoint, County Down, Northern Ireland.

The castle, a 17th century granite structure, has remained in her family since 1670. Peggy’s father, Roger Hall, served as adjutant-general of the British military in Gibraltar during World War I. He and his new young wife from Gibraltar returned to Ireland at the end of the war to raise their family and take over management of the estate’s holdings.

Although Protestant by birth, Roger agreed with his wife’s insistence that their children be raised Catholic. Peggy was one of six children, the third of four girls.

Life in the Hall family was never dull. The extensive land holdings in Ireland provided various challenges and responsibilities but this did not stop Roger from taking his young family to Africa where they travelled by train and stayed in Rhodesia to work for a short time.

Interested and enthusiastic in life surrounding her, Peggy became involved in all things natural and mechanical. By the start of World War II she was a competent mechanic and quasi-engineer; she could have become a pilot had her eyesight been better.

Instead, she served her country manning a weather station in the Hebrides and later by performing mechanical repairs on RAF planes.

After working in London at the end of the war, she returned to Ireland. Now in her 20s she found little available for a woman of her skills. However, there seemed to be ample opportunity for advancement in the islands of the Caribbean.

She booked passage aboard an immigrant ship which provided inexpensive passage for citizens of the British Empire. After working in Jamaica, she received an introduction to a family with holdings in the Bahamas. She travelled there for the first time in 1949. This land of many islands and shallow banks remained her adopted home throughout the rest of her life.

After her first job working for the Levy family on Eleuthera, she served as cook to Linton Rigg who was travelling by boat throughout the Exumas updating his now famous yachting guide to the Bahama Islands.

This newly-published cruising guide introduced a broad group of boaters to the beauty of the Exuma chain. In addition, the information it provided was instrumental in protecting the area that in 1956 became known as the Exuma Cays Land and Sea Park.

Soon after this voyage with Linton, Peggy settled down to her business career in Nassau. She started Nassau Plastics Company, Ltd in the 1960s, and manufactured and supplied custom plastic items.

The company is still active, having survived the hard times surrounding Bahamian independence, when many small foreign-run businesses were pressured strongly to liquidate.

Peggy was loved by her employees and business associates alike. She was a caring and fair administrator. In 1965 she was granted status as a “Belonger”, being issued certificate number 59. She earned recognition as Business Woman of the Year in 1981, and that same year was granted permanent residency.

Throughout her time in the Bahamas, Peggy was rarely without her own boat. Her first was a 25’ lapstrake, a Scandinavian built Folkboat which she rescued after it grounded and washed ashore during a hurricane.

She christened it Arawak and sailed this small engineless wooden sailboat for many years from Nassau throughout the Exumas and up to the Abacos.

She was an active member of the Nassau Sailing Club.

Never totally predictable, and always one to take advantage of an opportunity, Peggy’s next boat was a gas-guzzling Donzi powerboat named Sundowner.

This short-lived adventure was soon followed by her 37’ Lord Nelson Tug, Moby.

With its shallow draft and wonderful accommodations, Moby became the perfect floating home to Peggy and her dog Powerful during the years in Exuma Park.

There were major changes in the Bahamas and yachting between the 1950s and 1980s. As people discovered the beauty and accessibility of these islands, the Exuma Park came under pressure from development on land and poaching by sea.

With the increased availability of reasonably priced fuel for gas and diesel engines, the large and beautiful area with public and private land within its boundary was now accessible within a day’s travel. As the park fell victim to lack of oversight, the Bahamas National Trust called on their lifetime member Peggy Hall.

The Exuma Cays Land and Sea Park is successful today because of the work set in motion during Peggy’s tenure as its Park Warden.

With her extraordinary skills with people and charismatic leadership she was able to co-ordinate the efforts of many she inspired.

Often she used her own resources and spare time as she educated other to the importance of “No Take” Marine Replenishment Reserves among island systems.

The park became the focus for various types of volunteer helpers including the youth groups of Raleigh International (a British organisation), fellow yachtsmen, and local Bahamians citizens who all worked hard to complete the first headquarters building within the park.

It was dedicated at Waderick Wells in August 1988. An eclectic and diverse group of notables from the community and national government were in attendance including, then Exuma Member of Parliament George Smith, Bahamas National Trust board member Lynn Holowesko, Nassauvians Charlie Bethel and his family, Bahamian story teller and historian Derek Burrows and Exuma residents Tucker Rolle and Kenneth Rolle.

Peggy’s environmental advocacy continued to attract international attention to the Park. Her primary long-term goal however was to make it possible for more Bahamians to visit the park, and appreciate the value of marine resource conservation. She believed strongly in recruiting and training Bahamians to become park wardens.

The headquarters building served as a base of operations for the Park Warden, a visitor education and information centre and a place for volunteers and visiting students to exchange information and ideas.

With the help of Assistant Park Wardens Bob Rader and Anita Martinec, Peggy organised the Exuma Cays Land and Sea Park Support Fleet, a group of helpful visiting yachtsmen. She invited the Staniel Cay community to the Park for August Mondays. She continued to look for ways to interest Bahamian young people in conservation and park stewardship.

In 1991, the first Bahamian park wardens were hired and since then the post has been filled by native Bahamians. By helping to institute an Exuma Cays Land and Sea Park Advisory Board, and beginning a management planning exercise with the Nature Conservancy, she was instrumental in establishing the Exuma Park as an institution, now managed by a group of people.

The Park has continued to be a critical refuge for Bahamian marine resources, part of global proof of the effectiveness of “No-Take” parks.

Even after retiring from the park warden’s position, Peggy continued her conservation efforts by working hard to protect the private land within Exuma Park. Tragically this work was cut short.

In 1996, at the age of 73, she had a serious stroke after returning from the park aboard her boat Moby.

She received treatment in the United States and went to live with her sister’s family in Spain until she was able to return home to Georgetown, Exuma in 1998.

She never regained full use of her right side.

Peggy was not one to give up or be overcome with self pity. For the next 14 years she lived in a house with a perfect view overlooking Elizabeth Harbour.

During these years, she continued to discipline and challenge herself, this time by using her engineering and tinkering skills to learn to paint, write and carve wildlife and flowers with her left hand.

She was visited regularly in Georgetown by her many colleagues and was well cared for by her good friends Sue Darcy Henry, Millicent Smith, Jack Wright and Rita Burrows.

Remembering Peggy Hall will bring a smile and a laugh to all who knew her. The people of the Bahamas have gained so much from the conservation efforts she made on behalf of their young country.