PM: ‘Closing down every web shop would be expensive’ 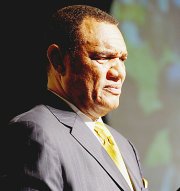 TO CLOSE down every web-shop ahead of the referendum would take great effort and cost taxpayers a lot of money, Prime Minister Perry Christie insisted yesterday.

His statement came in response to calls from clergymen and vote “no” campaigners that the government should have shut down all number houses pending the outcome of tallied votes on January 28.

And while proponents of gambling have argued that around 3,000 persons would be left jobless should the “no” vote win, Mr Christie said his administration would have no choice but to fill the employment gap.

“I told the church (and) I was very honest with the church,” he said. “I was not going to even try it. As I said before, it would take a lot of effort and a lot of money to try. Whenever that happens,  if there is a ‘no’ vote,  and we begin the process, you will see the extent to which that is going to be a very costly affair.

“The government has to (be prepared to find them jobs).

“Everyone knows what the economy of the Bahamas is facing.

“There are a number of investments that are now reaching the point where they will be able to hire. Some (are) in the pipeline where later this year they will begin to hire. So we are optimistic. There are so many people who are unemployed that the prospect of adding to it will be just another challenge,  but the people of the Bahamas will exercise their judgment in this regard.

“We just have to wait and see what they will do.”

According to Mr Christie, there are scores of Bahamians who have been able to make ends meet through employment with the ‘vote yes’ campaign. He told of two sisters which he said were employed with his campaign.

“(There are two sister) who live in a one bedroom with three children each, with no running water and no electricity. I would not dare open my mouth and tell them they cannot be employed with the ‘vote yes’ people. They are working because no one else is helping them.

“Social services in some instances will help with rent, will help with payments, but they need jobs. But when they are not working who in the devil is going to help them?” Mr Christie asked.

I do implore you to please listen to what you are saying if not as a sensible person, then as a lawyer. The numbers racket is ILLEGAL. If you had two sisters living in a one bedroom with three children each and no running water or electricity selling drugs, should they not be arrested for their attempts at employment? Do we only look at the numbers racket and not see how harmful it is to the society as drugs? I know you and many others may not like my comparison, and may feel I am comparing apples to oranges, but they are all fruit and and they are each illegal.

You cannot applaud illegal activity to solve your unemployment problem. You cannot make irresponsible statements as, "...these people will either have to go deeper underground illegally OR we (the government) will have to find alternative employment for them." This type of encouragement leads to a deduced attitude that illegal activity is okay IF (fill in the blank). A society is run by laws. We make not like or agree with them all based on our individual nuances, but they keep law and order.

You my dear Mr. Christie are already over the slippery slope, perhaps if you reach for the law it may bring you and the rest of us you are dragging now with you back to order.

What I see now is they the politicians are blaten with the lies, they don't try and sneak it by you. This is offensive at least to me because it is one thing to feed me lies but it is entirely different thing to feed me crap, because you don't respect my intellect and that is what is going on now. For the PM to talk about people loosing job in an illegal business, if they crack down on all of the corner drug dealers job will be lost also.

Comrades you would be fooling yourself not to recognize that under the current PLP, and the former red shirts, that while at times the independence of Bahamaland's Commissioner of Police from government interference can be a delicate balance, still it should never be attempted to tell the Commish that his police officers "cannot" investigate and arrest and lay criminal charges against a particular individual or group of individuals.

PM I do agree that the Commish should be answerable to the minister responsible for security, but Bahamians will view this as going too damn far.

IronV, I couldn't agree more. Our PM is off his rocker on this one. My friends and I have collectively decided to incorporate a pharmaceutical company and sell marijuana for "medicinal purposes". We will aim to employ at least 1,500 to work the fields and double dare this Goverment to shut us down because our reasons for growing marijuana are good, we are sustaining the economy by employing people, and we are paying national insurance. What a flippin' fluke!!!!

Only if you offer shares in the company

Lol. I meant to add that part!

Lol man sounds like a plan that may fly in this Bahamaland as of late.

If we made smoking Pot legal - think of the amount of people who would come here from away just to sit under a coconut tree smoking a joint and chilling out, eating conch fritters, conch salad, fryed fish, homemade bread and ice cream.

The spin off revenue would be huge!!

Obie needs to get with the program....

But he claims he has no horse in this race.

To say it is too expensive to enforce the law is hogwash. I see where they are trying to pass a law that will cause an owner of a dog to be fined $5,000.00 for animal cruelty in the first instance, $10.000.00 in the second instance and fines plus jail time on the third charge. Even if the webshops are legalised, they will have to be regulated and made to operate within the confines of the law. This will require active policing and hefty fines, jail time even. So do not even think that the buck stops at legalisation. IN Fact thats where the work begins!

I think the PM is trying to give a revamp of the argument to vote yes. He is trying to say that a no vote will cause thousands to lose their jobs and we as Bahamians will be responsible not himself....and it is wrong of him to make that argument simply because it is the Government's job to create jobs within the public sector. It is unfair to place that much weight on the minds of the Bahamian public.

Comrades I see minister of tourism Obie's name mentioned here. Now, I need remind you that this is the same minister who went public to demonstrate his ignorance on tourism gambling. And, this has to scare the living hell out of the many thousands of Bahamians who he has been charged with the huge responsibility to keep those regular tourism paychecks a coming, and to open new tourism job opportunities for the many who still have no regular paychecks.

I take this position because it was minister Obie who said that the legalization of the numbers rackets would be a positive cash benefit, resulting from tourists playing the local numbers?

Minister Obie being the complete opposite is the case, one is left to wonder how in the hell did you arrived at such an idiotic and false conclusion, when ever dollar a tourist spends with the numbers "bosses" is a dollar they will not be spending with local merchants, scooter and car rentals, restaurants, tips, taxis, the beach peddlers and the list goes on and on?

Minister Obie do you think-up all these false stuffs by your lone-self, or with help from ministry officials? Either way with you in charge we Bahamland is screwed for the next four plus years?

Comrades som'tin think about before you 'Vote Yes.' Bahamaland has a minister of tourism who has actually become an advocate for redirecting our already dwindling tourism dollars away from local business operators, over to the numbers "bosses?"

Amen, or och as in och that hurt?

This is the best post you have ever made, who are you and what and what have you done with TalRussell?

I am not sure that closing is the best strategy! Maybe you should elaborate a new strategy! At least that is my personal opinion! http://www.yachtbooker.com/Yacht-Char...">article

According to Mr Christie, there are scores of Bahamians who have been able to make ends meet through employment with the ‘vote yes’ campaign. He told of two sisters which he said were employed with his campaign.Facebook http://www.developmentinn.com/custom-...">application

According to Mr Christie, there are scores of Bahamians who have been able to make ends meet through employment with the ‘vote yes’ campaign http://www.iomundo.com/">IOmundo