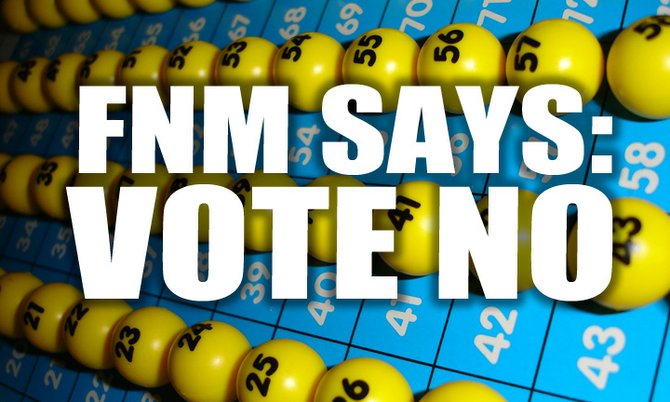 At a press conference yesterday afternoon, Dr Minnis said the public should vote “no” on January 28 because of the “flawed” and apparent “fixed” nature of the referendum, in addition to a “tremendous lack of information” from the government on the subject.

He said despite the government asserting that they had not taken a position on gambling, everything they have done suggests the “clear opposite.”

“At every step of the way the Christie government has conducted itself as if they were the principal lobbyists and agents for a select group of web shop owners, particularly the ones who financed their general election and by-election campaigns,” Dr Minnis said.

“This incestuous relationship between the government and the top numbers men is deeply troubling to the FNM and we said so every chance we got.”

The Killarney MP said the government made it “consistently” appear they were pushing the issue “for the express purpose of paying back their financial backers” with little consideration as to what’s in the best interests of the country.

The government also “made no attempt” to provide information to help voters understand “the full scope” of what a new gambling regime would entail and who would likely qualify to own and obtain web-shop licenses, Dr Minnis said.

Promised draft regulations, which would show how the licensing system would be implemented, have also not been made available, the party leader continued.

“Their strategy appears to be, keep the people in the dark about details, answer as few citizens’ questions as possible, ignore the official Opposition, and patronise the religious community and the Bahamas Christian Council,” Dr Minnis said.

“Given the tremendous lack of meaningful information, the government’s incompetence, and legitimate questions about a corrupted process, the FNM has concluded that it will recommend that the Bahamian people vote no on question number one.”

Dr Minnis also hit out at the wording of the question, claiming it “appears to be fixed” to enable the government to “do whatever it wants” in wake of a “yes” vote.

“How can any law-abiding government seek to obtain a mandate from the people merely to ‘regulate and tax’ an illegal enterprise,” he questioned, explaining the question should have first asked for a mandate to legalise gambling operations.

And while the FNM supports a wholly state-owned lottery, Dr Minnis continued, the government’s “absence of information” on the subject leaves “far too many unanswered questions.”

The government’s idea of a national lottery is one where a select group of web-shop operators are “given a free hand” to design a system that maximises their returns, Dr Minnis claimed.

“Through the ‘back door’ of a ‘yes’ vote for a national lottery, the government would be able to ‘fix-up’ their web-shop financial backers even in the event of a ‘no’ vote on the first web-shop question,” he said. “In plain language the FNM does not trust the PLP government to establish and regulate a national lottery with clean hands.

“Because the FNM and the Bahamian people have no clear understanding as to how the Christie government proposes to develop and implement a national lottery and because of our fears that this will be another sweetheart deal for the select few, we recommend to the Bahamian people that they vote ‘no’ on question number two.”

Dr Minnis claimed the process leading to the referendum has been “rushed” and more time is needed so Bahamians can make an “informed and educated” choice.

This is what I'd call typical red shirts sit-in on the fence with one Comrade Minnis leg hang'in over da other side Seems like now they've declared they is for half ya 'Yes Vote,' but not da other?

You might not have agreed with my buddy Hubert, but you damn well knew exactly what side fence he be sit'in his ass on.

Hubert we may need ask you to return to the front. LOL.

Tals you calling the name of the trusted law partner /fisherman from coopers town ,,,,,,,,,,,,yeah you might not agree w/ papa but you always knew what he stood for ,,the biggest joke is PGC saying the big numbers boss will put 20 million in the treasury ,,,,,,,,,thats not even 10% of their net profit ,lmao

WHAT!!! Tal asking for the fisherman from Cooper's Town to return? BLASPHEMY!!

Boy I never thought I'd see the day when you'd (Tal) be calling for HAI. Absence makes the heart grow fonder. :-)

What are the odds of the "YES" vote passing as opposed to the "NO"...hold on le'mme check my next dream book, cause dis serious... Bahamians getting sell plenty sweet dreams..employment, plenty winnings, big fat checks in the treasury, shares in the web shop business...house and car and appliance give away...

Anyone that believes that refusing to vote "No" or spoiling your ballot in protest against the FNM, will do anything but cause the vote yes people to win, is simply ignorant. The vote yes people are praying that they can convince anyone planning to vote No to stay home so that they can win. During the last election do you remember any of the constituencies telling you the number of protest votes cast?

How does the vote count work?

Same as a general election where is goes by constituencies that voted a certian way.

Or is it by the total number for vs. against?

Can anyone tell me?

Gambling will always be there if we wanted or not.

So its better to do it under control, than to say "no" and keep all the gambling underground funded by crime elements. This I say from my 30 years experience as a chief officer.

Another blog I run and mention my opinion regarding gambling is http://fridgeadvisor.com/how-long-do-...">family life