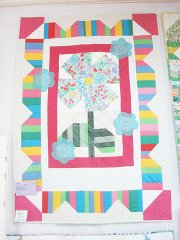 WHY DO members of the Stepping Stone Quilters Guild practice their craft in the Bahamas where the weather is mostly warm? Because the group is not quilting for winter comfort. They are quilting as way to record emotions, memories and experiences with creativity.

Twenty-six years since the Stepping Stone Quilters Guild’s formation in 1986, the group’s intent for quilting remains the same. It is an opportunity to continue a tradition and engage in a relaxing activity.

On Thursday, the Stepping Stone Quilters Guild opened its 26th annual quilt show at the Trinity Methodist Church. It will remain open until Saturday.

“When we get together we do not only quilt to keep warm. This is a form of emotional release for us. We quilt our memories, our emotions and our experiences. They are not necessarily recognisable on the quilts but they are often integrated in the pieces. We are also a support group. While we quilt we also talk to each other about what is going on in each other’s lives,” said Maria Chisnall, a guild member.

“Our first show was held in 1990. During that time the first cruise ships came to the islands and they brought various groups. Among the groups that came to the Bahamas on the cruise ships were quilters. When they came to see the show this opened up the door for our group to exhibit in places all over the world,” she said.

The 18 member group, comprised of Bahamians and non-Bahamian members, has exhibited in places like Atlanta, Illinois, and Pennsylvania. They are gearing up for an exhibition in Montreal, Canada this year.

The annual show usually exhibits work done in the previous year. Ms Chisnall said the show is not juried, and quilters have total freedom to make quilts the way they choose.

In the current exhibit, the group adopted a theme. At least one quilt by each member had to depict the challenge of time. Some members depicted clocks and time zones, while others opted to show the passage of time.

“This is not a juried show, this show is just a registry of what we have done during the past year. One section of the exhibit is dedicated to time. Quilts in this segment were restricted to 24 square inches. Past challenges involved using specific fabrics, but quilters were free to use any fabric they wished to,” Ms Chisnall told Tribune Arts.

“Mystery Quilts” was another challenge, where members were given nine clues throughout the year. Their task was to create a quilt from the clues which included instructions for striped borders, flowers, leaves and instructions for assembling the top of the piece.

Quilters were given a three-month period to complete this challenge.

Ms Chisnall said the challenges help members to stretch beyond their abilities and create out of the box pieces they would not ordinarily create. The challenges also decrease the chance of repetition in the designs and creation of the quilts.

“We want to reinvent quilt making in the Bahamas. We are the original recyclers in life. A shirt that is torn and that cannot be worn anymore can go into a quilt,” she said.