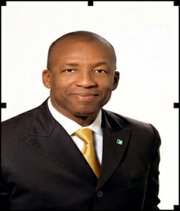 He said because of the economic impact web-shop taxation could have on the country’s budget, as well as the hundreds of employees in the industry, the business should be legalised, regulated and taxed.

Mr Smith said gambling is a “personal and individual choice” and took note of the web shops’ many employees who rely on the operations to make ends meet.

“We’ve got some church leaders who think they have a right to inflict their interpretations on the whole Bahamian community and sometimes not remembering the impact it has on the lives of people,” he said.

“I read some quotes about a woman who works in the web-shops; she’s a single mother with two kids and she rents a place and is doing fairly well. Now you’re telling her that the entity where she works – which in her words has been good to her – can’t happen any more and we don’t think we have any responsibility to her?”

The former MP also noted the potential benefits a regulated and taxed web-shop industry could have on the country’s finances.

“These are a group of men that have built businesses. There is some question about whether they were outside of the law or whether there was no law. In the absence of a law to regulate them, maybe they felt they were not doing anything in violation of a particular law,” he said.

“But they built businesses and they’re obviously successful. I take the view we have to find ways of legitimising enterprises which have had some economic success so that they can further expand and go into other businesses and add to growing the economy of the Bahamas which is so vital and so necessary.

“If the local gambling industry could have contributed whatever amount it is, $40 million, $60 million, to the national treasury, and expand and create more jobs, that helps the economy to grow. That puts us in a position where that amount could help, along with other things, result in a couple years of having a balanced budget.”

Mr Smith said: “I think the chaps who are involved in this thing, they came forward and said, ‘Look, we want to come under some control, we want to be taxed. So agree to this thing so we could be regularised and taxed.’ Well the majority of the votes on Monday told them no. So they availed themselves of their right to use the legal proceedings. They have undertaken to do that which they think is their right and actually, I hope they prevail.”

Former Comrade Georgie says; “I read some quotes about a woman who works in the web-shops; she’s a single mother with two kids and she rents a place and is doing fairly well. Now you’re telling her that the entity where she works – which in her words has been good to her – can’t happen any more and we don’t think we have any responsibility to her?”

Comrade Georgie, I is confused. Will you help unconfuse me? Are you aware that one of the numbers "bosses" is on record as stating that; "employees of the web shops are applying for loans at banks and having to 'lie' on their loan applications about where they actually work?" Does this not concern you?

Comrade George, where was your voice when many of your fellow Bahamians were losing their paychecks, and losing them from jobs that were considered "legit" by the banks and they didn't have to be coached to lie to obtain a mortgage, credit card, auto or personal loan?

Again, Comrade Georgie, if the so-called 4000 jobs the number "bosses" say they have on their payrolls is accurate, then how come they have never disputed the many media claims that only a grand total of 700 employees are paying into National Insurance?

I don't know name or the particular situation of the woman you speak of but something doesn't jive, when you have employees marching on Bay Street, and based upon the figures going unchallenged, even you Comrade Georgie, would be left to conclude that some are not legitimately employed?