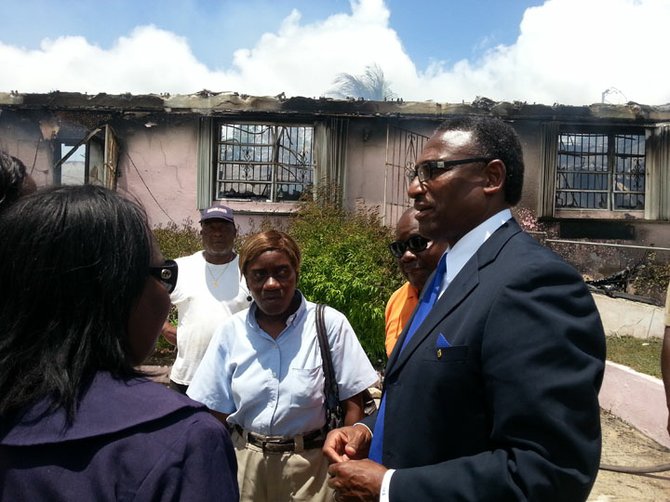 Minister of Local Government V Alfred Gray at the remains of the complex.

• 3.25pm UPDATE: One person has been airlifted to New Providence for smoke inhalation. According to fire officials on the ground, it appears that the cause of the fire was an electrical short which occured at the rear of the Administrative Building in North Eleuthera. The complex housed the administrative offices, a Magistrate's Court and a Town Hall.

• 12.50pm UPDATE: Clay Sweeting, former PLP candidate for North Eleuthera, told The Tribune the administrative building is completely destroyed by fire, but there are no reported casualties.

He said staff told him they smelled smoke and initially thought it was a bush fire. When they investigated it, they saw a section of the building on fire. They gathered personal items and hurried out the building.

Sweeting added the cause of the fire may have been electrical.

Mr Sweeting is heading to the scene. Minister of State for Legal Affairs Damian Gomez and Minister of Agriculture and Local Government V Alfred Gray are departing Nassau on a Defence Force flight headed for Eleuthera.

A FIRE has destroyed the government's administration complex in Upper Bogue, North Eleuthera this morning.

According to Minister of Local Government V Alfred Gray the fire and is still burning.

Police at Tarpum Bay Police Station say they are uncertain if there was an explosion, but they are on the scene at the fire.

Are you there? Contact The Tribune at: kvirgil@tribunemedia.net or call 502 2366.

Maybe some disgruntled Eleutheran's wanting to downsize a useless government...or someone wanting a govt contract to rebuild it!!

I love the two main elements in the photo. One is a charred, burnt out, useless, empty piece of garbage permeated with an acrid smell and the other is an unfortunate government building that burnt to the ground.

Lolol. So funny, but yet so true!

Banker you are the best:)) next to Tal of course:)

I had to log on to endorse banker comment...It's PRICELESS...hope you don't mind me sharing.....