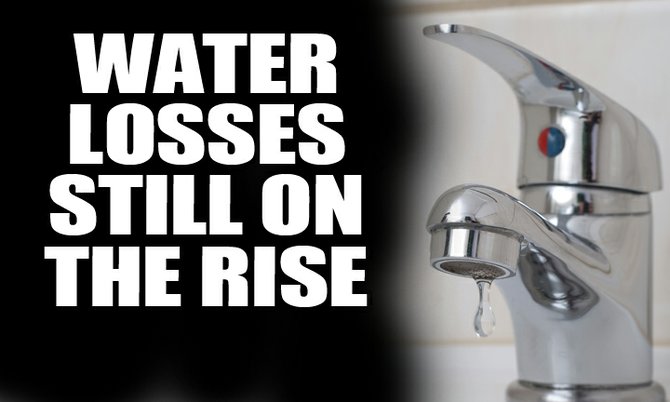 A YEAR and a half after agreeing to pay a foreign company more than $80 million to reduce water losses, the Water and Sewerage Corporation is now experiencing a “significant” increase in leakage, general manager Glen Laville admitted yesterday.

This water loss surge, the cause of which Mr Laville was unable to explain, is the reason why WSC has again taken to rationing water supply at certain hours.

At the time the contract was signed, the corporation reported that it lost just over five million gallons of water a day, but earlier this year, WSC put this number at 6.5 million – which translates into a loss of $16 million a year.

Mr Laville said although the corporation also signed a deal to expand their Baillou Hills desalination plant, allowing for the purification of an additional 4.0 million imperial gallons of water a day, the problem isn’t production.

“Our issues right now is the amount of water that is going into supply, that’s to meet the demand, and also the losses that we have,” he said.

“Unfortunately what really happened is demand has increased slightly but losses have increased rather significantly; and so all the extra production capacity that we made arrangements for and that came out of the move from tankering to desalination, the majority of it has ended up as water losses – non-revenue water.

Finding a way to reduce those losses is a priority for the company, Mr Laville said, pointing to the $81 million contract with the Israeli firm, Miya.

“That contract started in earnest in January of this year and so progressively, we expect to reduce those losses by just about 4 million gallons, per day. But that will be over a period of four years,” he said.

“This is the first year of the implementation of the non-revenue water contract so we expect to have good results from that.”

It was announced on Wednesday that the corporation will periodically interrupt water services for residents of New Providence until further notice.

The water rationing exercises are taking place nightly between 10pm and 5am in an effort to conserve water for periods of peak usage.

Keep the water rationing until the problem is fixed. Unless people are affected - nothing will happen. It will be an invisible problem that affect no one.

E I G H T Y M I L L I O N D O L L A R S to fix a problem and the problem still aint not (yes aint not) fixed??? Is the company being sued? Have heads been rolling? Who got kickbacks? This scandal seems to be bigger than the National Insurance scandal. Eighty million to fix water leaks and the water still going missing!. What happens to oil if it was to be discovered in this Bahamas? I know it will just vaporize in front of our eyes. This problem with missing water has gone for far too long

Should have used a USA company not the brother-in-law,cousins or friends of our great political leaders. As with any contract they should have been fully bonded and insurer.