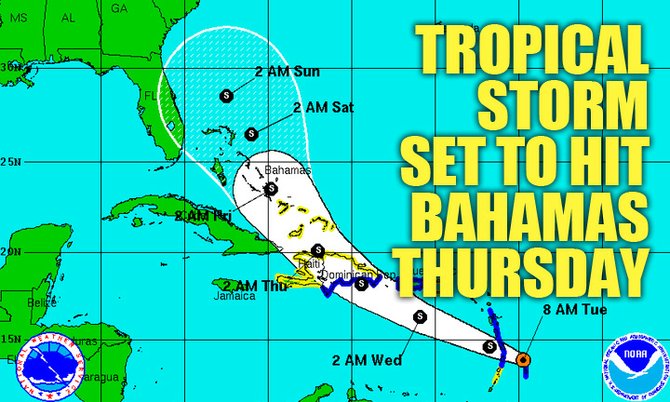 TROPICAL Storm Chantal was racing towards the Lesser Antilles today, and is predicted to hit The Bahamas on late Thursday and Friday.

US forecasters expect that wind shear and interaction with the mountains of Hispaniola and Cuba will cause Chantal to start weakening in about three days and it is expected to be a tropical depression Friday while over the Bahamas.

A tropical storm watch is in effect for Haiti, the Turks and Caicos, the southeastern Bahamas, St Vincent, the US Virgin Islands, Vieques and Culebra, and the northern coast of the Dominican Republic from west of Cabo Frances Viejo to its border with Haiti.

Residents of St Lucia were today shuttering schools and preparing to close the island's two airports as it neared.

The storm was centered about 45 miles (70 kilometers) north-northwest of Barbados around 8 am, the US National Hurricane Center in Miami said. The storm had maximum sustained winds near 50 mph (85 kph), and was moving west-northwest at 26 mph (43 kph).

Chantal was expected to move over the small islands on the eastern rim of the Caribbean and be near the Dominican Republic on Wednesday, according to the Hurricane Center.

Chantal could be near hurricane strength before it reaches Hispaniola, the island shared by the Dominican Republic and Haiti.

In St Lucia's capital of Castries, supermarkets stayed open late Monday as islanders stocked up on emergency supplies including water and batteries.

The government was taking no chances earlier in the day, ordering a midday closure of all schools until Wednesday. The director of the local meteorological office warned that parts of the island could potentially be affected by landslides and flooding.

In a national address Monday evening, Prime Minister Kenny Anthony urged people to hunker down at home until the tropical storm had passed.

A tropical storm warning is in effect for St. Lucia, Barbados, Dominica, Martinique, Guadeloupe, Puerto Rico and the southern coast of the Dominican Republic from Cabo Engano to the border with Haiti.

A tropical storm watch is in effect for Haiti, the Turks and Caicos, the southeastern Bahamas, St. Vincent, the U.S. Virgin Islands, Vieques and Culebra, and the northern coast of the Dominican Republic from west of Cabo Frances Viejo to its border with Haiti.

In Barbados, officials urged people to stay tuned to radio stations and prepare for the rapid approach of Chantal, the Atlantic hurricane season's third named storm.

In Puerto Rico and the U.S. Virgin Islands, the U.S. Coast Guard urged all waterfront facilities to remove unsecured debris, hazardous material and pollutants from dockside areas. Pleasure craft operators were advised to seek safe harbor and secure their vessels.

The storm was expected to produce rain and strong winds in Puerto Rico, with gusts of up to 60 mph (96 kph) in southern and mountainous areas, according to Roberto Garcia, director of the National Weather Service on the island of less than 4 million inhabitants. Chantal was expected to pass more than 100 miles (160 kilometers) south of Puerto Rico early Wednesday.

Deputy Director of the Bahamas Department of Meteorology, Basil Dean confirmed a Tropical Storm watch is in effect for the southeast Bahamas and that will be upgraded to a warning as the storm moves closer.

However, he said, residents in that area should remain "relatively okay" as the fast moving storm will have little time to intensify.

He said: "Our position remains basically the same as Monday - the entire country can expect stormy weather as a result of Tropical Storm Chantal but the storm will likely "water down" as it moves over Hispaniola.

"No matter what happens, we will get some weather out of the system - in terms of rain," he said. "Most of it will be confined to the eastern islands - San Salvador, Cat Island, and Rum Cay."

As for New Providence the storm is expected to stay west of the capital but rainy weather will begin again on Wednesday morning.

Mr Dean warned the eastern islands to "be a little cautious over the next couple days" as the "minimal" tropical storm passes through, and a watch is in effect.

"And we will be upgrading to a warning moving forward," he added.

The "good news" however, he said, is "fast moving storms have little time to intensify" and rainfall will be "minimised."

The department will continue to send out alerts as the storm moves closer, he said.

Good job posting this but let's keep it updated, the 2pm report shows it closer to Abaco then this 11am report.

We need to keep this updated.

Thanks and keep up the good work.

I am happy to find your website and can join to comment I think is very valuable to be able to read your writing,http://al3abbnat.hmaasat.com/" target="_blank">العاب بنات جديدة