When Beatlemania Came To The Bahamas 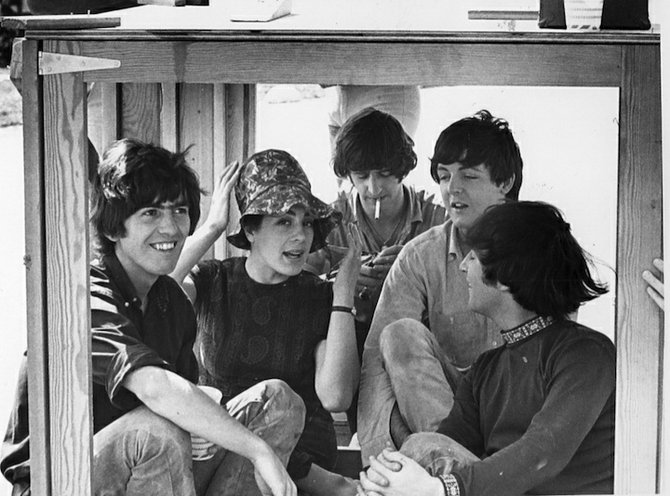 AS part of our ongoing celebrations of some of the events of the past 40 years or so in the islands, to mark the 40th Anniversary of Independence, Rupert Missick Jr recalls the moment Beatlemania came to The Bahamas.

THE ten sleepy, elegant villas in Sandals Royal Bahamian’s Royal Village have changed over the decades.

Surrounded by lush vibrant gardens, stoic classical statues, a koi pond and secluded pools, they are the descendents of the first lodgings available to guests of the Balmoral Club.

On some days, at twilight, the ghostly tracks of a thin white mist which blankets the lawns and walkways is quickly burnt off by the heat of the rising sun and the damp staccato rhythm of sprinklers.

In the balmy afternoon under the spotlight of the midday sun, the flowers of the garden are in their full glory, trooping out an almost psychedelic array of colours, mirroring the “cellophane flowers of yellow and green” from Lennon–McCartney’s “Lucy in the Sky with Diamonds”.

In the evenings, a choir of baritone-throated frogs and the soprano hiss of crickets fill the air while the muffled noise of merrymakers and resort entertainment carry on in the distance.


There is more magic here than almost anywhere else on the property. This is where those couples seeking romance most find it and where creative or reflective souls feel most at peace.

The villas are named after some of the flowers in the garden - Oleander, Frangipani, Bougainvillea - names bestowed on the structures after a series of refurbishments and new owners. But one of these buildings, the one which went by the name of the “Deauville Cottage” was once the home of four immortals: Ringo Starr, George Harrison, Paul McCartney and John Lennon - The Beatles.

After the success of the band’s first film, “A Hard Day’s Night”, it was decided that they should follow up with another movie, this time with a bigger budget - $1.5 million - and in colour. They would also leave the UK to film in some exotic locations like the Austrian Alps and, naturally, The Bahamas.

Along with the obvious reasons for filming in Nassau – the gorgeous scenery and sunny weather – there was a practical and business savvy reason behind the decision.

“Their presence on a working assignment lent credence and substance to a plan hatched by (Beatles Manager Brian) Epstein and (NEMS Enterprises’ Chief Administrator Geoffrey) Ellis to keep most of the group’s movie earning tucked away in a Nassau-based bank. It was good to let the dreaded taxman see that the boys were actually spending some time in the region where their dosh was stashed.” (Barrow)

The Fab Four left London in the winter of 1965 for the sweltering Bahamian shores via a chartered BOAC flight. One of the film’s producers, Walter Shenson, had sent a location manager four weeks in advance of The Beatles’ arrival to, among other things, find lodging for the film’s stars and crew. However, the manager was confronted with a serious problem.

“How were 700 extra people going to be housed in Nassau, which was already bulging at the seems with its usual influx of high season tourists? That his efforts met with success was largely due to the enthusiastic co-operation of American Bob Rowley, chief of the Bahamas Tourism Board.” (Howard)

Although in The Bahamas the interest in The Beatles was nowhere near the levels it was in North America and Britain, the band did make an impression on the local population. While a far cry from the 1,400 that swarmed Heathrow International on their departure to the Bahamas, after their arrival, a hastily organised press conference was almost crashed by some overly enthusiastic fans.

The press reported that “a near riot” broke out at the airport where a press conference was held immediately following their arrival.

“Some 50 fans started battering the hall door when it was learned that The Beatles were inside.” (Lewiston Morning Tribune)

After the press conference, Paul, Ringo, John and George left with their leading lady, Eleanor Bron, for the Balmoral Club.

The morning after the beach at the Balmoral was flooded with cast and crew preparing for the two-week film shoot. This activity was accompanied by a small army of Beatles fans who had invaded the beach eager to spot their favourite Liverpool legend.

“Nearly everyone assembled on the magnificent beach outside the Balmoral Club. Julie Harris, the costume designer, set about giving the Beatles their final costume fittings. The immense generator was moved into position and Director Richard Lester roamed about, deep in thought, picking the best spots for the next day’s filming.” (Howard)

As to be expected, the press did descend on Nassau to seek interviews to talk about the movie, which by the time they began filming in Nassau was just titled Beatles 2. Most of the interviews obviously centred around the movie and its production but the press was also interested in the personal life of “The Sad Beatle” Ringo Starr, who had just married his sweetheart Maureen Cox on February 11, 1965.

Derek: How do you stand the separation so soon after getting married?

Ringo: Oh, y’know, you’ve just gotta take it, y’know, ‘cause we knew when we were gettin’ married that - y’know, I had to leave to come out here for the film. Y’know, we just sorta got used to the idea. It’s a bit of a drag, y’know. But there was no point fetching Maureen out cause, y’know, we’re working like lunatics, and we don’t have a day off when we’re on location.

Derek: It wasn’t a question then, really, of having a Caribbean honeymoon, which is many people’s dream.

Ringo: No, no. Well, we - we didn’t have an English one, never mind a Caribbean one.

Derek: How long were you actually away from London?

Ringo: Um... we got married on a Thursday, and we went back on the Sunday night.

Derek: It was quite a dramatic story, which broke at a very good time of day, too. How long was it planned before it happened?

Ringo: Well, we decided to get married two - two weeks to the day. And then it started getting planned from then, you know.

Derek: Yeah, well let me say congratulations, ‘cause everyone who knows you, knows you both, is delighted. I think it was a marvelous move, I’m sure you thought so too, or you wouldn’t have done it.

Ringo: Thanks a lot, Derek, and I thought it was a good move.

Derek: It means that at last we won’t have to deny or confirm the query, “Is Ringo married?” So would you now say, into the microphone, something for all time, on record: “I married Maureen Cox.”

During their time in the villas of the Balmoral, Paul would write “Wait” in front of Academy Award nominee Brandon deWilde, whom he met in the Bahamas during filming. DeWilde appeared in ‘Shane’ at the age of 11 alongside Alan Ladd and ‘Hud’ with Paul Newman in 1963.

“The Beatles had a little house near the sea where they hung out whenever they had a day off from filming or if there was time between shoots. One of the people they met in the Bahamas was the actor Brandon deWilde, a former child star… He was a member of the Peter Fonda, Dennis Hopper group of Hollywood hard-livers who liked to hang out and get stoned.

Paul: “He was a nice guy who was fascinated by what we did. A sort of Brat Pack actor. We chatted endlessly, and I seem to remember writing ‘Wait’ in front of him, and him being interested to see it being written’.” (Miles)

‘Wait’ was originally intended for the Help! soundtrack album but would not make it on the roster until one album later with the release of ‘Rubber Soul’.

George Harrison, “the quiet Beatle”, also celebrated his 22nd birthday with a birthday party at The Balmoral.

Their time spent in the Bahamas would also plant the seeds of some life changing developments in the life of one of the band’s members. The morning before Gorge’s birthday party at The Balmoral, while filming on Paradise Island the Fab Four were approached by Swami Vishnu Devananda, who was the founder of Sivananda Ashram Yoga Retreat on the island.

“He handed each band member a signed copy of The Complete Illustrated Book of Yoga, the first definitive instruction book on Hatha Yoga published in the West. After setting the book aside for a couple of years, Harrison would pick it up again when he developed a genuine interest in Yoga and was astonished to find that Swami Vishnu Devananda was one of the preeminent Yoga instructors in the world.” (Lavezzoli)

Sometimes, however, it was not always the best impression.

“John asked him to justify such lavishness when there were children and elderly folks starving and abandoned on the island (which John had seen for himself). The day after, they were asked to leave The Bahamas.” (Mulligan)

Even if the locals weren't very impressed by the Beatles' performance when they first came to Bahamas, the situation would be a lot different if they would held a concert nowadays. Like many other bands, the Beatles are a true legend for the music industry. If you miss hearing some famous songs, the collection on http://www.luthierscollection.com/aco...">http://www.luthierscollection.com/aco... will provide the best acoustic versions of your favorite songs.