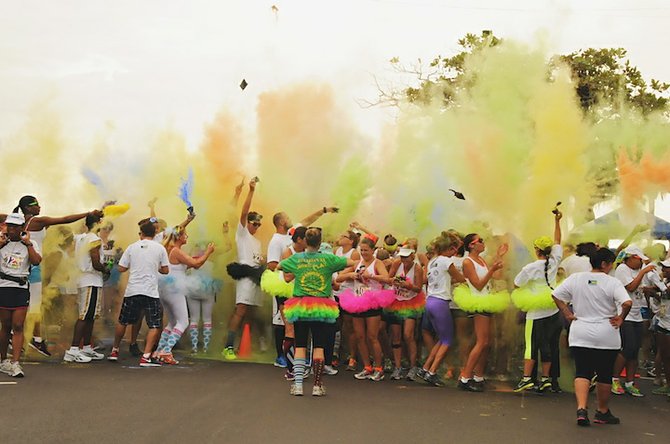 MORE than 400 participants, volunteers, and spectators gathered at Montagu foreshore on Saturday to take part in the 242 Colour Run.

The 5km (3.1 miles) course, the first ever colour run in The Bahamas, led runners and walkers from Fort Montagu over the bridges and back to Montagu.

The twist of the added colour was enough to bring smiles to all those who participated and supported the race, and those who were encountered along the way.

The weather helped to make a perfect day for the mid-July road race, with Tropical Storm Chantal dissipating and leaving welcome cloud cover for the morning.

The 8am start was delayed a few minutes, but just before the start, individual colour packets were tossed into the air, creating a fantastically blended cloud of colour around the start area.

Two Royal Bahamas Police Force motorcycles then led the runners through a colour-blast of Flash Caribbean Breeze Blue, the first of five colour ‘stations’ along the course. The second staging point on the course added Sun Burnt Orange, while the Paradise Island colour station added Key Lime Green and the last Nassau stop had Flamingo Pink.

The final colour station immediately before the finish doused the contestants in Bahamian Yellow, a fitting finish to the colourful race.

Participants varied from children pushed in strollers to walkers who only did a part of the course, to elite athletes.

The race was not timed, there were no official race winners, and the atmosphere was one of fun, not competition.

It brought together friends, families, coworkers, neighbours, Bahamians and non-Bahamians.

Last minute entries at The Sports Center in the days before the race helped bring the total number of registered entries to 333.

The majority of the colour-runners were Nassau natives, with others from Abaco and Freeport, and a few international registrants from the UK, Canada, and the USA.

The unofficial fastest person on the course was Marathon Bahamas winner Angela Cobb, who came over to run a fun race in a beautiful and scenic location.

Individuals and groups participated in the event, with groups as large as 25. Some walked together, some ran together, all had fun together.

As the colour-coated runners crossed the finish line, they were greeted with cold Aquapure and Arizona iced teas.

In the staging area there was an after-race party, where participants were encouraged to try the new Tropi-Pop drink, as well as Edy’s Fruit Bars. The adult entrants were greeted with ice-cold Sands beer. Music and festivities enhanced the atmosphere, all leading up to the big giveaway – five G-Shock watches provided by John Bull. The watches were given away to those who stuck around and had fun, and were drawn by random number.

Linzi Knowles-Benton was recognised with a case of Sands beer for being the first to register and for assembling a large group of enthusiastic runners, also know as “Conch Salad”.

The Rotaract Club of East Nassau is for younger members aged 18 to 30; they are young professionals banding together to help the community both locally and internationally. Both groups’ support was necessary, as over 30 volunteers assisted in the 242 Colour Run.

Raschard McKinney, Director of community service for the Rotaract club, said: “Congratulations to you and your team for hosting the event. It was fun and inspiring at the same time. I look forward to working with you and the 242 Colour Run in the future.”

Bahamas Waste greatly assisted in logistics and cleanup, providing portable toilets, trash receptacles, and a mobile pressure washer to wash down the roads after the event. As the colour is a water-soluble, non-toxic substance, any colour left on the course washes away with the rain and biodegrades rapidly.

The multi-coloured finishers all had huge smiles and nothing but kind words for the organisers and volunteers. Photos from the event are online at www.run242.com and on the event Facebook page.

Ann Marie Henson posted a comment saying “Thanks to all for their hard work. It was a blast! See you next year.”

Tamsin Rogers said: “Thank you to everyone who put today together...it was such fun!”

Organisers intend to hold the race again in Nassau. They also plan to have additional races starting in Freeport and Abaco. They want to thank sponsors, volunteers, the police, The Bridge Authority, The Ministry of Tourism, the Ministry of Finance, and all who took part.

Looks like a lot of fun. Will try to get over there for it next time.