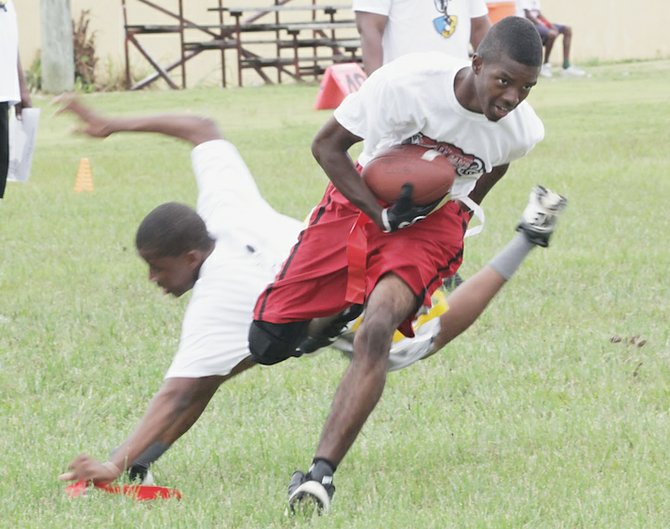 SCORES of aspiring young football players turned out for the 8th edition of the Devard Darling and the As One Foundation’s annual football camp hosted at the D W Davis Field this weekend.

Darling, one of the country’s most recognisable gridiron stars, hosted yet another edition of his summer clinic July 12-13 in an effort to develop the sport of American football in the Bahamas.

Darling said the camp is aimed at promoting the interest of young Bahamian boys and girls in the sport of American football and making a positive impact in the communities.

The camp has been held in different locations throughout the capital in recent years, including the Winton Rugby Field, the Tom “The Bird” Grant Sporting Complex and the D W Davis Field.

This year, camp participants can look forward to learning to play the game the right way from players who have reached the pinnacle in the sport. They will also vie for an opportunity to receive the perks of being named the camp’s most valuable player.

For Darling, the hosting of the camp continues to fulfill the ideals he and his late identical twin brother Devaughn devoted themselves to.

Their dream was to bring American football to the Bahamas, and the 8th edition of the Devard and Devaughn Darling Football Camp is “the realisation of that dream,” Darling said.

“This camp is mine and my twin brother’s dream,” said Darling. “I could not be more proud to come back home to give back to my people. This effort is for Bahamians by a Bahamian.”

In addition to the financial support provided by the NFL Youth Football Fund, the camp has partnered with the Bahamas Flag Football League for a second year to help conduct the camp and assist young athletes with skill development, technique and the fundamentals of American football.

Over the years, campers have had the opportunity to interact with prominent sports figures, who served as coaches, leaders and mentors throughout the duration of the camps.

While gaining invaluable skills and training in the game of American football, camp attendees also received free T-shirts and refreshments.

The As One Foundation was established in 2007 by Darling in memory of his identical brother Devaughn Darling who died in 2001 of exhaustion and dehydration when complications connected to his sickle cell trait condition arose.

Devaughn Darling was participating in spring training at Florida State University at the time. Recently adopting a new mission to educate and increase awareness of sickle cell trait while encouraging youngsters to achieve their dreams in the face of life’s challenges, the As One Foundation will unveil it’s new initiative, ‘Operation Hydration’, to the campers.

Operation Hydration is a sickle cell trait education and awareness presentation about the importance of hydration as prevention of athletic or fitness related death.