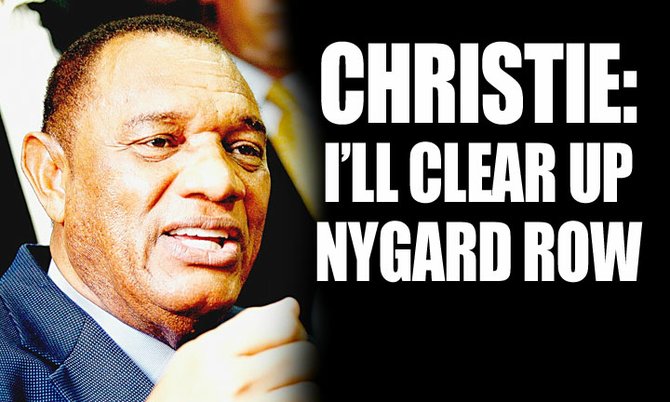 PRIME MINISTER Perry Christie said he “can’t wait” to clear up the controversy that has erupted over claims that stem cell legislation was introduced to Parliament at the request of billionaire Fashion Designer Peter Nygard.

The Prime Minister’s comments come on the heels of allegations fielded by the FNM that the government was rushing stem cell research laws to appease Mr Nygard. The opposition has also criticised the PLP for being too “cozy” with Mr Nygard after a video surfaced showing several cabinet ministers at Mr Nygard’s Lyford Cay home.

Mr Nygard has denied having anything to do with the government’s decision to bring stem cell research to the Bahamas. He said it was “a bid by Prime Minister Perry Christie to create another multi-million dollar industry for the Bahamas.”

However, he said, he is prepared to heavily invest in the establishment of a Stem Cell Research facility in the Bahamas.

Mr Christie also said it seems that the PLP is held to a different standard than the FNM when it comes to the media.

“I can’t wait to go to the House of Assembly on Wednesday for the Stem Cell debate. They been saying that Nygard cause me bring the stem cell legislation,” he said.

“Listen, let me tell you something, I want them to tell me about all those FNM politicians who does be down at Nygard house. This what they should be telling me about and they want my ministers to resign? Ladies and gentlemen, let me tell you the Bahamas is a very special place, a part of the political game is to cause distractions.

“They introduce what they call red herrings to cause you to stop what you are doing...I told the younger fellows over and over, try not to make mistakes with personal behaviour and integrity issues and be the best you can because you can be judged more harshly then anybody else.

“See Hubert Ingraham could take flights on helicopters and see Aga Khan and he could do all kind of things, but the minute you do it, it’s a different game because he is judged by a different standard. I told them don’t cry about that, that is the reality that you have to deal with.”

Two weeks ago, Mr Christie presented a Bill for an Act to regulate stem cell research and therapy in The Bahamas. At that time he described it as ground breaking medical technology expected to build medical tourism as a profitable industry.

Quote Christie: "I want them to tell me about all those FNM politicians who does be down at Nygard house."

This is our Prime Minister? How embarrassing. He is illiterate!

illiterate means unable to read and write. Not unable to speak properly so your using wrong words

I refer you to the Merriam Webster Dictionary. Take a look at definition 2a and 2b:

1: having little or no education; especially : unable to read or write 2a : showing or marked by a lack of familiarity with language and literature 2b : violating approved patterns of speaking or writing

naw he is trying to talk hard to his most undereducated of supporters ,you don,t think when he and a few colleges are sitting around getting pedicures and giggling like school girls at a sleep over he talks like that ,,i bet at that juncture he coys in the purest of the kings english ..

But you are the government of TODAY, when will you start acting like it?

"I told the younger fellows over and over, try not to make mistakes with personal behaviour and integrity issues and be the best you can because you can be judged more harshly then anybody else"..which group of "younger fellas" was that? Really, really? Was this before or after the Ministry of Housing and NIB fiascos?

You are completely missing the concerns. People are concerned about 2 issues:

40 years later and we are still being bamboozled.

Red Herring. Yes, Red Herring alright Talk about this foolishness and next year the VAT BOGEY MAN IS GOING TO CATCH US ALL.

With all that is going on in this country, I think our prime minister owes us an address. Face this nation.

And the girly men in high places know who killed Harl Taylor and Thad Johnson.

i think PGC , OHW , FLYIN FRED ,AND NYGARD , MAKE A DASHING QUARTET OF DANDYS ,AND WOULD BE OH SO ENTERTAINING OVER COCKTAILS AND A PLATTER OF PIGS IN THE BLANKET...

Good Lord we can,t even find gamblin in the numbers house w/ a IP trail, paper trail, and glazed eyed spinners wandering the premises like the new 2013 crackheads ,,and we are going to have a regulated stem cell industries ..The crept keeper is already shooting himself w / anti bogey man serum on a video w/ the most powerful men in the the country grinning to their eye teeth ,,won,t be long till Dr Frankenstien is filling his hyperdermic w/ wiggling live embyonic cells ,,,,Tals you can,t make this stuff up comrade ,,the PLP creep factor is now off the charts ..

I say let it happen (the stem cell thing). All of the people who want to find the fountain of youth will pony up big bucks. Why shouldn't Bahamians profit from that? Sure Nygard will make the most money at first, but we have a whole pile of slimeball doctors with little ethics who will soon take up the slack. I say that if people line up to pay you money, you should create the facilities to take it, and the government should be the first in line to tax it.

(but it is interesting to see that PGC said that he couldn't wait to clear the air and didn't. His excuse is that time ran out, but it is in fact the Prime Minister's office who controls who speaks and he could have spoken to it if he wanted to. More PLP dissembling and prevarication.)

i agree we been selling ourselves to the sinner w/ the biggest check book since we ran the civil war blockade ,,we sold China our vote in the UN for Bahamar ,,i say lets quit all the bible thumping ,big hat wearing ,we blessed b/c we more godly nonsense and accept who we really are ,,we know in our heart we got the gov of shakedown and slackness that most represents us ,,now lets knock off all that this ones a rev this one is a bishop ,like we foolin god and let the good times roll,,,

Alright so we pass embryotic stem cell research, so then where are they going to get these embryos? Are our blacks daughters going to become host for harvesting and selling their eggs and the males their sperm to produce these embryos, Actually we will be creating life for the soul purpose of destroying it. From what I understand these cells are harvested within the first 5-15 days or weeks after conception. So back to the old tale when does life begin let no one fool you life begins at conception. Harvesting babies for their cells! how on Gods green earth something like this is being entertained. Its wrong today it will be wrong tomorrow it will be wrong when Jesus comes. Oh and lets not forget how much money it will bring in. Its all about money anyone can come do what they want and its okay yes its okay after we are a little nation of blacks we take no thought of the sequence for the decisions made today and how it will affect generations to come. Lord we need you to intervene in this land we know as home.

naw we love to run to church while all the ordained who you wouldn,t let your teenage sons or daugthers be alone w/ thump bibles and scream themselves horse in some vain attempt to fool god about our righteousness ,,churching we good at , being moral thats another issue all togeather ,,

Two things -- there used to be a stem cell treatment center in Freeport. They got their stem cells from the umbilical cords of babies born at Rand Memorial. They were shut down by the govt of the day (PLP I believe). As for the mechanics of life as you say, here is what a human looks like at 5 days old:

I would have no problem selling my eggs if I were a woman, or selling my sperm to make stem cells.

Last I checked there were WHITES in the Bahamas as well.

And not all of them are Bay Street boys and White Knights..

So drop the race card Teeza...

I feel like we're missing the important point here. The thing is stem research is here, no matter by what means, and we should be focusing on making the best of it, not on petty little things such as this. http://incaltamintedebarbati.wordpres...">;)