Haitians: Up To 50,000 Living In Bahamas Without Documents 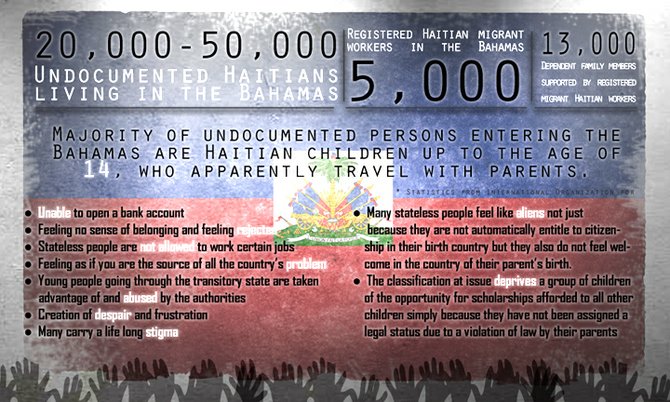 ACCORDING to exploratory research on trafficking in persons in the Bahamas conducted by the International Organization for Migration, there are  20,000 to 50,000 undocumented Haitians living in the Bahamas while the number of registered Haitian migrant workers is only 5,000.

It is estimated that more than 13,000 dependent family members are supported by these registered migrant Haitian workers.

The IOM says that the majority of undocumented persons entering the Bahamas are Haitian children up to the age of 14, who apparently travel with parents. It is the status of these children and those born in the country to Haitian migrants who enter the country illegally that the Commission addressed its attention when it examined the issue of statelessness in the Bahamas.

It highlights a fact, brought to its attention by the United Nations High Commissioner for Refugees (UNHCR), which explained that several provisions of the Constitution might have the effect of creating a class of persons who are stateless.

These parts of the Bahamian Constitution, according to the UNHCR, are not only contrary to various international agreements it has acquiesced to but also problematic in light of The Bahamas’ obligations pursuant to the Convention on the Rights of the Child.

The Commission admitted that Article 7 of the Constitution effectively reduces many persons to a “situation of effective statelessness, as the persons who are primarily affected are either unwilling or unable to avail themselves of the other nationality to which they are entitled. Needless to say, the majority of persons who fall into this  category are children born in The Bahamas to Haitian parents.”

Many persons have argued that these children are not stateless and are in fact entitled to Haitian citizenship. However, the Commission points out that the realities of the situation are not as simple as that.

The Haitian Constitution allows a person to obtain citizenship if they have at least one parent who was born in Haiti and who has never renounced their citizenship. So, on the surface, persons born in The Bahamas to a native-born Haitian parent who has not renounced Haitian citizenship would become a Haitian national at birth.

However, the claim to Haitian citizenship by descent is limited to the first generation if their parents fall short of these criteria.

The commission points out that even where persons falling into this category are entitled to Haitian citizenship, most choose not to acquire Haitian passports, as in any event they would be required to renounce that citizenship at 18 to acquire Bahamian citizenship. The Haitian Constitution forbids dual Haitian and foreign nationality.

However, the commission believes that the 18-year period for persons born in the Bahamas to non-Bahamian parents to become eligible for citizenship is too long.

While the requirement was intended to coincide with the age of majority, when the claimant would be capable of choosing which nationality they wish to take, the commission said that it is assumed that during the interval, the person would be able to hold the nationality of some other country.

This, the commission said, was never the intention of framers of the Bahamas Constitution that persons in those circumstances would be rendered stateless.

The Commission acknowledged the enormous “psychological, socio-economic and other ill-effects that result from leaving large groups of persons in limbo in relation to their aspirations for Bahamian citizenship.”

“Not only are the affected individuals badly damaged and marginalized, the entire society is put at risk and its future compromised by having within its borders a substantial body of persons who, although having no knowledge or experience of any other society, are made to feel that they are intruders without any claim, moral or legal, for inclusion. Such feelings of alienation and rejection are bound to translate into anti-social behaviour among many members of what is, in effect, a very large underclass in our society,” the commission said.

It was frequently suggested to the Commission that persons born in the Bahamas to non-Bahamian parents should be given a more formal status, such as permanent residence,  until they reach the age of majority and are able to apply to be registered as citizens.

“The difficulty with this is that permanent residence (with limited exceptions) is only available to persons who are of the age of majority, which is also when the entitlement to  citizenship arises under Article 8,” the Commission said.

The Haitians that come/came here looking for a better life picked the wrong place on the map. Life is not good here for Bahamians alone so how is it that you think life will be better ? hmmm, it must be because of our 'selective enforcement' and carelessness toward serious immigration reform and land piracy. Its too late to change the law now, especially with 50k+ Haitians roaming around and/or living on untaxed lands/shanty towns. I mean you already brought the dengue fever, in soon enough time it will be scurvy etc and more diseases as a result of poor sanitized living. Life is simply free here for them whilst they take advantage of the jobs that the Bahamians seem to have too much pride for. The Bahamas will soon become a little Haiti. Stop feeling sorry for those that break the laws and enter our dwellings without consent. SEND THEM BACK COLD TURKEY! We do not have anything like the 'Cuban Refugee Adjustment Act' here although it would not hurt to say that we do because it is obvious that the government rather push this one under the rug as another problem that has become to great to fix in a 5 yr term alone.

Get serious over the numbers. Any informed jackass can easily collectively count the heads at Sunday morning worship services across Bahamaland and quickly you'd see that these low immigration statistics could easily be out by the tens-of -thousands. The illegal Haitian numbers in Abaco alone would be more than a than a best guess to be well over the twenty-thousand mark, and growing rapidly?

Because of my background in math, one of the bank directors who was preparing a white paper, asked me to spend a month collecting statistics and using analysis, asked me to produce an estimate of the amount of Haitians in New Providence alone. I dusted off all of the statistical tools, Bayesian inference, etc, and determined that there were at least 75,000 Haitians on New Providence (accurate to within plus or minus 5% -- 19 times out of 20). After my study, that is when the bank started to advertise in Creole.

The illegals in the US face the same fate, why do they expect any better in our little country? As a matter of fact, you can't even register kids in the US schools without proper documentation. Also our imigration laws are the same as most in the regent, and not as strict as many! It's as if everyone wants us to dismiss our current immigration laws to accommodate the Haitians. Because of our size we cannot afford a policy/law that supports citizenship on birth only, just imagine what our population would be like today if that was the case!! Yes we are guilty of cases where are citizens do the same thing in the US, but that number is very small and most of those person usually come back home!

make these people pay for our services,taxes etc.they work make money and send every dollar back home,they try to spend as little to nothing in our economy,they dont rent apts,pay light bill,water bill,cable,phone bill etc.they hardly want to ever pay for anything,

Leaders. We urge you to fix this vexing problem. Or the people will find themselves choosing again. We will not allow our country to be taken while we sleep.

I gave up a long time ago. Send the dam Haitians back and send the PLP & FNM with them as well.

Get rid of the illegal Haitians, Jamaicans, Asians, Latinos, Americans, Nigerians, Europeans and Canadians and every unemployed Bahamian would find gainful employment overnight.

Get rid of the PLP & FNM and the whole country could "left up our heads" again and move the country forward.

what's the difference between the immigrants that come to the united states and the ones that come to the Bahamas? the answer is NOTHING!!! Haitians that come from Haiti to the Bahamas are only looking for a better life so the little shitty jobs that you so called "Bahamians'' will not do they do it and then your lazy asses complain about how they are taking your jobs. you motherfuckers are selfish and have nothing to be proud of Haitians are not destroying the Bahamas you "Bahamians" are... and you don't see it because you are too damn ignorant. if something happens to were all black people have to go where they came from which is Africa will you have a problem with Haitians then? when other races look at us they don't see Haitian, they don't see Bahamian, they don't see Jamaican they see BLACK they see niggers. you don't hear about this inhumane shit that you proud "Bahamians" do to Haitians in the states because the government is smarter than that. The Bahamas never amounted to anything and it will never amount to anything.

Difference is America has the resources to help and we don't! You people really having a problem you cussing and acting the fool! What we do to Haitians? What give them health care and allow their 10 of thousands illegal kids to school? We are sick of the Haitian coming here? It's to much point blank! Haiti is huge go build ya home dred. And you want talk bout Africa, what part of Africa you came from?

There needs to be a moratorium on immigration/migration to The Bahamas... period!

happythrifter, tell em why you mad! hahaha. you can say what you want, black is black and Bahamians destroying the country and so on and so on... but then why are Haitians STILL coming in droves everyday??? People always claim they only trying to get the US and whatever but dammit we all know alot of them (or y'all as it may seem) trying to get to the Bahamas, but if its so bad here then why come?? Last time i checked the shortest way between two points is a straight line so trying to stop here if your ultimate destination is the US is pretty pointless to me. Sure, our little country has huge problems created by and encouraged by "real Bahamians" that are a never ending battle and won't see resolution for years to come but as far as I'm concerned we don't need mass immigration draining us to compound those problems.