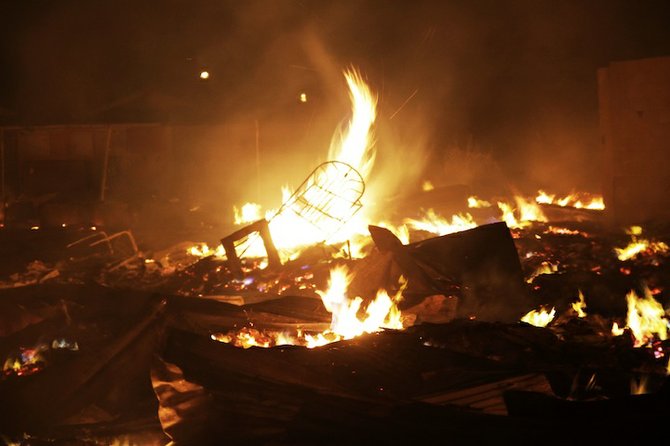 LEADERS in the Haitian community claim that 15 members of the Joe Farrington Road shantytown affected by last week’s fire want immigration officials to “give them a ride” back to Haiti during their next repatriation exercise.

The desire to return to Haiti, says Haitian Pastor Celiner St Louis, was heightened by the fact that no

additional help has come into the community since the fire.

“I went to the Red Cross, and they told me to go to Social Services, and we have not seen any of them. We need clothes for these people and water and food. No one is helping, and now they want to go back. I am going to Immigration on Monday (today) to find out if they can help people out. Maybe they can give them a ride if they have space, immigration can let them go with the regular repatriation,” he said.

Pastor St Louis said that thus far there are 15 Haitians who want to return to their home. While he said that there were others who had expressed an interest, they are waiting to see if the landlords are going to evict them or not.

“I am sure the number will get higher. These people are sleeping on the floor and in church. Some good Bahamian people helped us out, but that is it, we need more help,” he said.

Immigration and Foreign Affairs Minister said that he was not sure that the Immigration Department could made a decision to participate in what would amount to “voluntary repatriation” on its own and pointed out that the funds government has allocated to such exercises are to repatriate those who are interdicted.

“This may be a matter that has to be coordinated through Social Services… you would have to ask cabinet whether you can deviate funds for another purpose, perhaps the other agencies can make such a request, but immigration on its own cannot make that decision,” he said.

GIVE ALL UNREGISTERED A BIG RIDE BACK, IT WILL BE ONE OF THE BEST INVESTMENTS. iM TALKING FLIGHTS OUT EVERYDAY, RAIDS ON UNAUTHORIZED DWELLINGS ETC. I DONT CARE IF THEIR AIRPORTS ARE FLOODED WITH ALL THE 'REFUGEES' THAT WE SEND BACK SO THAT HAITI CAN SEE HOW THEY ARE INFECTING AND DEGRADING OTHER COUNTRIES BECAUSE OF THEIR LACK OF CONCERN FOR THEIR OWN PEOPLE. LET THEM DEAL WITH IT, WHILE WE WASH OUR HANDS. THIS IS OUT OF HAND.

My late Comrade Granny called me from her porch up in heaven a few moments ago, after learning that "her" PLP Minister Freddy says he's scratching he head over illegals actually lining up to be "deported," but the government isn't exactly sure how in the hell to proceed with immediate deportation? Oh yes, The Tribune has a wide heavenly readership, although can't say with any certainty if they read the paper online or through the holy spirit.

There are many task around this island that needs to be done. Notice the use of the word task and not jobs/work. Allow those wanting a free-ride to perform such tasks for about three to four weeks for the exchange of food, water, clothing and a one-way ticket back to their homeland. Example:- schools are in need of major yard work, so open up the gyms under supervision (R.B.D.F. guards) for housing with bathroom access as one option. However to just send those individuals home free of charge after they have spent their money to get here, rape our land of various resources is just out of the question. Or let the church whom is the spokesperson for them receive a special offering to assist. To eat in a fine dining restaurant with no money comes to mind, you will wash the dishes.

simple problem solved,put them on a Defence Force vessel and send them home,it used to be done before,i dont see why it cant be done again,if they want to go let them,some of these people are only bleeding our country dry,we have some good ones who contributed to the building of our nation,but at the same time our laws must be respected,we cannot sustain the burden of another nation on our backs,i believe in the Bahamas is for Bahamians,we must keep our nation Bahamian ALL ILLEGALS need to go home.

How can you as an illegal immigrant attempt coercion with respect to departure from this nation because you have not received assistance after your home(illegal residence) was burnt down. If it was arsen, that was wrong and the perpetrators should be punished But to you as an illegal immigrant your thinking must be corrected You are here ILLEGALLY A subtle but important concept to grasp You do not have the rights of a citizen, resident, etc It is clear that you have no respect for us as a people or nation. In no other nation is this allowed.... We will not tolerate it, from anyone, any longer! And to the powers that be, if you do not step up to the plate, I am afraid the plate will shortly be taken away.....

Even the so call Pastor shows he has no respect for this country. How long have he known about these illegal immigrants and stayed shut lipped. Yet now is using the church as a mediator. Like you said ILB they are here illegal and should not receive any service or special care that is awarded to taxpaying citizens. However, being that they are still human beings, basic food and water should be given. As it stands for returning them home, yes they should be but remember, they have been here for who know how long benefiting from 'the fat of our land' and should be put to carry out certain tasks to work of their food, clothing and passage home funding.

I gave up a long time ago. Send the dam Haitians back and send the PLP & FNM with them as well.

As ILB mentioned, these people seem to forget they are ILLEGAL! They cannot and should not expect to be treated the same as legal citizens and nationals of The Bahamas. They come on a sloop and wanna go back on a doggone Dreamliner?! WTF?! The government need to try hard find some fishermen who going close by Haiti and tell them they better hike a ride as close as possible and then find the best way to land from there. Because sure as twice one as two, when they get this free ride back home....they'll be back in the country eventually because if Haiti wasn't a problem they never would have left in the first place.

Whether they hike a ride or not, the fact still remains they're catching a free ride. Let these illegal immigrants work of a small percentage of what they have obtained whilst living in the Bahamas. All that is happening now is that their safe house in the Bahamas has been destroyed, and to invest in other dwellings in our country makes no sense to them. You think the time they were here, they were just twiddling their thumbs? No they were working hard and letting friends/relatives with proper documents Western Union their monies back home where they want to be returned free of charge. Lol, Haitians may play 'stupid' but they're very smart. Now the 'stupid' cap just has another head to fit on, wonder whose? MAKE THEM WORK!!!