Flamingos Stand Out In 'Emblematic' Exhibit 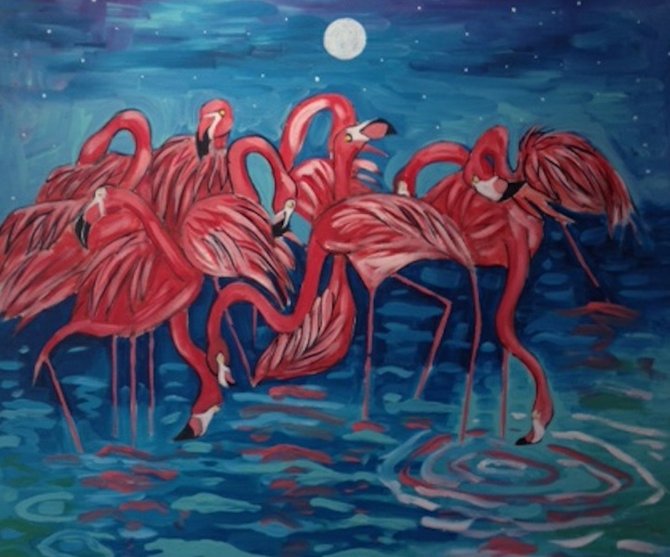 THE COUNTRY’s 40th anniversary of independence was officially recognised on July 10, but celebrations have continued.

“We wanted to do something for the Bahamas’ 40th Anniversary of Independence and I always like to get as many artists involved in projects so we thought how about featuring national symbols because it was interesting,” said Pamela Burnside, manager at Doongalik Studios.

“We sent a call out for different artists asking them if they would submit a piece of work that had any of the national emblems and symbols on them. And strangely, a lot of people didn’t have them,” said Ms Burnside.

“If you notice you will see that we have a lot of flamingos here on the pieces and I think that is because this is the Bahamas and people like to look at pretty pictures. The flamingos are used very often,” she said.

It was difficult to find artwork featuring the Yellow Elder and Lignum Vitae symbols.

For those who missed the opening, the Emblematic journey continues. The show will be up until August 9.

Ms Burnside said she is hoping to have a lot of Summer school students come out and view the exhibit this week.

“The first persons to come and see the exhibit before the opening were students from the Willamae Pratt School for Girls. I had a group of them come in to see the show. I think it is good for them to understand that art takes all forms and you can even use something like nation building in art,” said Ms Burnside.

“The children were quite excited about it. I challenged them to look for the national symbols in each of the paintings and that was quite exciting. They were having a little competition amongst themselves. They didn’t know a lot of the artists so it was good to see and learn about the mixture of the ages of the artists,” she said.

Ms Burnside thanked the Dawn Davies collection and the D’Aguilar Art Foundation for contributing the Jackson Burnside piece for the exhibit. She said they are always very willing to loan some of his work from their collection.

Kim Smith, who submitted a drawing for the exhibit, said: “When Pam sent the email out about Emblematic in regards to artwork that somehow illustrates some symbol of the Bahamas, I thought of this particular drawing that I have. It is kind of stretching it a little bit but it does have the colours of the Bahamian flag in it.”

These are fascinating creatures! They look like something out of this world and I think they are very beautiful. http://incaltaminteonline.blog.com/">radu