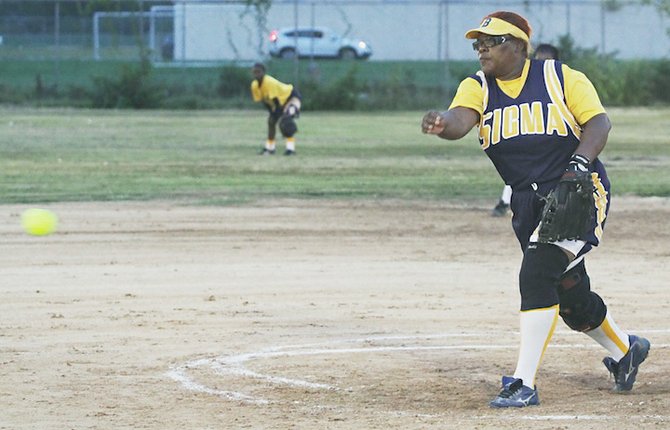 The Sigma Bracketts managed to outslug the Black Scorpions to stay in the thick of things in the early standing in the women’s division of the (NPSA) New Providence Softball Association.

The Bracketts, who acquired the services of manager Mario Ford from the defending champions Bommer G Operators, put together two innings to knock off the hapless Black Scorpions 5-1 at the Bankers Field at the Baillou Hills Sporting Complex last night.

With the win, the Bracketts joined last year’s runners-up Lady Hitters at 2-1 for a two-way tie for second place behind the front-running Proper Care Pool Lady Sharks, who are perfect at 3-0. The Scorpions remained at bottom of the six-team pool at 0-3.

In the men’s feature contest, the Andre Gardiner Construction Buccaneers took on the Mighty Mitts. The final score, however, was not available at press time.

In the women’s opener, the Bracketts jumped out to a quick 1-0 lead as center fielder Latonya Bowleg drew a lead off walk from Marville Miller. Bowleg then stole second and after advancing to third on Vanricka Rose’s ground out, scored the initial run on a wild pitch.

Miller managed to get out of the inning by retiring the next two batters.

Despite the run, it turned out to be a pitcher’s duel between two of the veteran pitchers in the league as Bracketts’ mainstay Ernestine Stubbs was working on a perfect game through the first three innings, including striking out the side in the second.

In the third, the Bracketts had a chance to put a couple more runs on the scoreboard with two out when Bowleg got the first hit of the game on a single and got all the way to third on Rose’s single. After Rose stole second, Miller struck out Shervette Taylor for the second time to work out of the jam.

Miller, however, wasn’t as fortunate in the fourth as the Bracketts’ batters finally came alive.

First sacker Ashanti Darville, who last year helped the first year Lady Hitters, was hit by a pitch to start the rally. She then got all the way to third on a pass ball before left fielder Shaquel Smith drove her home on a RBI single.

Smith then moved up to second on another pass ball and third sacker Jovanthe Rose reached safely on base on an error. That brought upsecond sacker Kenise Symonette, who had a two-run double to plate both Smith and Rose.

Both teams blew their golden opportunities to score in the fifth.

After running out of luck in the sixth on a double play, the Bracketts had their final chance to score again in the seventh. After their first two batters got out, the Bracketts left both pinch runner Sheena Taylor and Smith on base as Jovanthe Rose was struck out.

That set the pace for the Scorpions, managed by Angelo Dillet, to mount one last chance to at least score.

Replacement center fielder Nicola Major, who came up with a great defensive effort to ignite the double play in the sixth, laid down a perfect bunt to get on base to start the Scorpions rally. Third sacker Charmaine Hamilton followed by getting on base on an error.

As Hamilton attempted to go to second, she was beamed in her back and was safe on the base as Major went scampering home before she tripped, got up and scored the Scorpions’ only run before Stubbs got the final two outs to end the game.

Note: The NPSA is slated to be back in action Thursday night with another double header. In the women’s opener at 7pm, the Wildcats are up to face the Sharks. In the men’s feature contest at 8:30pm, the Miller Rams set to take on the Buccaneers.

Then on Saturday, the Lady Hitters will tangle with the Operators in the ladies’ opener at 7pm while the men’s feature contest at 8:30pm will feature the Hitmen against the Rams.