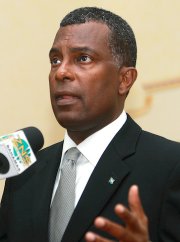 MINISTER of Foreign Affairs Fred Mitchell cautioned Bahamians not to jump to conclusions over the temporary suspension of non-immigrant visa services at the US Embassy.

The embassy resumed processing visa applications for Bahamians yesterday, according to Mr Mitchell.

Speaking in the House of Assembly, he said: “Conspiracy theorists abound about what this or that action means. I wish only to deal with the facts as we know them.

“It is always prudent to base one’s commentary on the facts and not on speculation that is not based in reason or logic. It is the government’s view that matters ought to be put in their proper context.

“A serious event transpired. We should not make it worse by exaggerated claims.”

Mr Mitchell was referring to comments from the opposition and on social media following the attack on a 74-year-old diplomat assigned to the US Embassy.  Police sources have identified the diplomat as Kathleen Cayer, who was attacked and robbed as she walked to church Sunday morning.Non-immigrant visa services were suspended on Monday.

In a press statement, the FNM said the interruption of US visa services because of the assault and robbery of the American Embassy’s vice consul had sent “shock-waves” through the Bahamas.

FNM MP Hubert Chipman said this was not the only recent attack on a tourist outside the Roman Catholic Cathedral as he chastised the government for failing to keep the peace.

Yesterday, Mr Mitchell said he was disappointed by the political division over the incident.

He said: “The explanation from the US is simple: the Vice Consul was one of a specialised group of rare experts in her field and the US government indicated that they were challenged in her absence to find the level of expertise which is reposed in her. Thus the brief surcease yesterday.”

Challenging opposition calls that the incident was unprecedented, Mr Mitchell pointed to the 1997 murder of FNM cabinet minister Charles Virgil.

Speaking of that incident, he said: “We got through it by logical and rational responses to a difficult problem. The perpetrators were brought to justice.”

Mr Mitchell added: “I urge all Bahamians to rededicate ourselves to ridding the country of crime. I am certain the professionals are as we speak taking the measures, seeking to contain this very ugly incident that we deeply regret and deplore and are trying to ensure that it does not happen again.

“They have the full support of the government in protecting all within our borders whether visitors, diplomats of ordinary citizens of the Bahamas.”