'The Girls All Competed Very Well' At Baaa Nationals 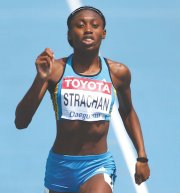 The duo pulled off the 100 and 200 metres titles respectively in the absence of defending champion Chandra Sturrup, who announced at the start of the two-day meet at the Grand Bahama Sports Complex that she was retiring from the sport after a career that has spanned more than two decades.

Henry Rolle, coach of the duo, repeat long jump champion Bianca Stuart and sprinter Nivea Smith, said he was thrilled about the performances as they gear up for the summer meets, including the Senior Central American and Caribbean Championships in Puerto Rico in July and the IAAF World Championships in Moscow, Russia, in August.

“The girls all competed very well,” said Rolle, an assistant coach at Auburn University where their training base is located. “With both Anthonique and Sheniqua, the idea is to bring them around slowly because we really want to see them make it to the finals of the World Championships.

“As for Bianca, she has had a series of meets that she competed in recently and so she’s performing the way she is expected, so I also expect that she will go to the CAC Championships and the World Championships and have some very good performances this year.”

Ferguson, by the way, won the century in 11.18 to go under the Worlds A qualifying time of 11.28, followed by former Auburn teammate Cache Armbrister, who did 11.44.

Strachan took the deuce in 22.32 with Shaunae Miller placing second in 22.45 as they both went under the Worlds A standard of 23.05. Miller’s time was a new junior national record, replacing the old mark of 22.70 shared by herself and Strachan.

Add Stuart’s winning leap of 6.61 metres in the long jump and Rolle said it turned out to a fantastic nationals.

“The programme is working and that’s because of the confidence that the young ladies have in the programme,” Rolle said. “It’s just a true indication that we are on the right course.”

Rolle noted that he was even more impressed with the other members of the Auburn Elite team, including Kerron Stewart, who claimed the victory in the women’s 100 at the Jamaica Athletic Administrative Association’s National Championships at the national stadium in Kingston, Jamaica, in 11.22.

And at Trinidad & Tobago’s National Championships, Kai Selvon, another member of their team, was third in both the 100 and 200.

“It’s a good group going into Worlds and all of those ladies worked hard,” Rolle said. “They stuck with it, even when it wasn’t easy. With a month to go, if I can just keep them focused and we do some key things in training and they get the right competition to help their confidence, they will all do very well.”

This weekend, Strachan is slated to be back in action as she competes in the 200 at the Sainsbury’s Grand Prix in Birmingham, Great Britain. Then it’s off to London for the next week where she is expected to be joined by Ferguson, while Stuart will head to the Sr CAC Championships in Puerto Rico.

Rolle said it’s interesting to see how well Strachan is performing, considering that she is going through some growth spurts as her body is still developing.

But considering everything that the team is going through, Rolle said he’s looking forward to watching the Auburn Elite enjoy a successful summer.