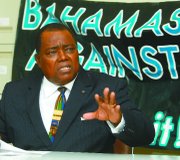 THE REV CB Moss, president of Bahamas Against Crime, said “hopefully more parents will be arrested” after a 50-year-old mother and her three sons were arrested when police found items, believed to have been stolen, in their home.

Two of the young men, ages 25 and 21, were arrested Tuesday morning off Soldier Road and East Street for a home invasion in April.

Police later searched their Richville Subdivision home and confiscated a flat screen, a TV, laptops, cellular phones, jewellery and other electronic items. Police arrested the mother and 17-year-old brother of the men, both of whom lived in the home.

Although the mother’s role in the crimes is not yet clear and police say they are determining whether to press charges against all family members, Rev Moss, speaking to The Tribune, said: “Hopefully this will be the beginning of something new. The state must let parents know they will not be allowed to get away with thrusting dysfunctional children on society.”

Rev Moss said parents are often complicit in their children’s crimes. “There’s complicity on the part of parents and that’s a large part of the problem,” he said, adding: “Parents go along with their criminal behaviour for various reasons, including economic reasons, because they don’t want to lose the child to the state, because they hope the child will change or because they want to avoid the embarrassment of having to publicly acknowledge that they have a problem child. Some parents are afraid of their children. They are intimidated so they just go along. But that is why the state has to intervene at an earlier age. You just can’t stay on the outside and determine which reason is the right one.”

He added: “Bahamas Against Crime for years has been saying that the battle against this crime crisis has to be fought in three areas: one is law enforcement, another is the criminal justice department, and civil society is the other. Although Bahamas Against Crime has no mandate to operate in the first two sectors, we certainly could operate in the civil society and that’s where we’ve been active.”

“We’ve been calling on the government to enact laws which hold parents and guardians more responsible for their underage children and their children who reside in their homes and an incident like this falls within this category. We feel it would go a long way toward addressing some of the early contributive factors that causes criminal activity.”

“We also recommend that the government establish the capacity to deal with situations where parents are unable to control their children. Parents should report their children to the relevant agency and the state should be able to respond and decide whether the child should be monitored in the home, monitored at school or taken out of the home for a temporary or extended period, etc. If it’s done early enough it could have the effect of changing the course of a young person’s life.”

Yes yes yes!! Start holding the parents accountable, especially if they are housing the criminals and are in possession of the stolen goods!!

This is a good idea, and this is the reason why it will not be carried outhttp://tinyurl.com/c7l9ck6" width="1" />

I was raise to understand that the Parents are liable for the behavior of their children, and so stayed the hell out of trouble! Is this not the law as it has stood for decades? So we we have not stood with the rule of law....... Is not the law derived from our Constitution? So we have not stood with the Constitution either......... How does the pledge go again, when being sworn into Parliament or the Bench, the Police force or any other position of authority? Do we not read anything or understand an oath?

He missed the most important factor in these Homes: Responsible Men... For many young ladies Pop culture decides what a good man is suppose to be.. They want a Ruff Neck, A Thug... The nice young man working hard in school and planning to be some body in life does not have the swagger they have been indoctrinated to believe is kool, the thug has it with his attitude and flashy drug money..Unfortunately in the long term thugs are not good for anything and end up in jail leaving all these single mothers to raise these Boys... Now that nice young man is successful in life and would not touch some worn out damage single mother with 5 kids with a 10 feet pole. So the cycle continues, and you are left with many Households without responsible MEN around to guide and discipline these Children... Pop culture and Radical Feminism has destroyed the image of the Man God Intended to Lead....So these women end up back with Thugs Breeding More Criminals...

When a well-to-do family member who steals $100,000 from work and they take it home, will you want the policeman's to also arrest the entire household family, if the proceeds are found on the premises? Or is this just for the poor folks? Why hasn't all these outspoken Comrade Preacherman's, been asking the police the arrest the families of all those whose great fortunes are well known to have come from the proceeds of crime? I guess it all comes down to the size, ya go'in toss in the Sunday morning collection plates?

More "Revs" need to be arrested, for spreading idiocracy? Have they visited the prison lately, and if so do they approve of its 3rd world living conditions, not even fit for animals? How do they expect someone that goes into that prison to come back out a responsible citizen who can be part of a civilized society? Now they want to send the "parents" to the prison - it is totally insane. Don't get me wrong, I am not saying parents do not hold some of the blame, but making the parent a more violent criminal will not help the situation. What the "Revs" should be saying FIRST is the Prison System here needs to be overhauled - currently it is a disgrace.

From Tals perspective 90% of the politicians and Pastors would be in Jail, not to mention many disgraceful business people..