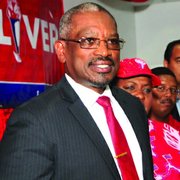 FNM Leader Hubert Minnis yesterday called on the government to “come clean” over dishonest campaign promises after a recent admission on violent crime.

Pointing to discrepancies between the government’s completion of objectives outlined in its party’s campaign manifesto “Charter for Governance”, Dr Minnis charged that the PLP party manipulated voters to win the 2012 general election.

“They said [initiatives] would happen immediately, that was the word they used and that was not honesty.

He added: “When they said that they would pursue retrieving the 2 per cent in BTC so the people would have majority share, they knew that was not honesty.”

Following the attack on his bodyguard, Mr Davis told reporters outside Cabinet that the incident proves that no one is “safe” from the unrelenting scourge of crime in the country.

Mr Davis called for Bahamians, from all walks of life, to come together to help in the fight against crime.

Yesterday, Dr Minnis charged that Mr Davis’ comments demonstrate that the government does not have the solution to crime despite campaign promises.

“The public is now waiting for them to continue this path of honesty that “Brave” Davis has commenced, so that they can come out and admit that what they did they only did to get elected,” Dr Minnis said.

“He’s indirectly saying they do not have the solution.”

Mr Minnis have to get with the reality that it was just a campaign promise . We are all aware that politics is a game . Whats really important is that he seek out ways to make the FNM more attractive for 2017 , right now there arent enough substance in the arguements been put fourh.

The difference between the FMN and PLP is the same as the difference between Coke and Pepsi.. The situation is at a point where both parties need to say lets suspend politics and come together and solve this Crime problem for the greater good of the Country.. This is about our future and the future of generations to come... Unfortunately the ego's and selfish nature of politics and politicians, along with these individuals thirst for power and fame makes it almost impossible too reach common ground.. The reality is most politicians get elected to serve themselves, families, and cronies, the needs of the country comes last..

it really comes down to math ...if we keep having more babies than our GDP and bloated civil service can absorb crime will continue to increase ,,when single mother of 6 for 3 different daddys and men w/ 3 inside children and four outside children is the norm crime will increase ..lets not talk about some imaginary industry or jobs that don,t exist ,,we make babies faster then our GDP can produces jobs ,,all you have to do is look at Jamaica and Haiti ..look up the countries up stable birth rates ,i e, average 2 children for couple ,,they have homocide rates under 2 per 100,000 ,,ours is like a war zone at 27 per 100,000......irresponsibility cannot produce responsibility

The Bahamian people bought promise on 2012. They voted for that and now they are catching the most hell. Catch more hell...

Yes and they also voted for the FNM's "manifesto" in 2007, and caught hell for their lies and false promises, and hence they were kicked out of office. Politics, as usual.