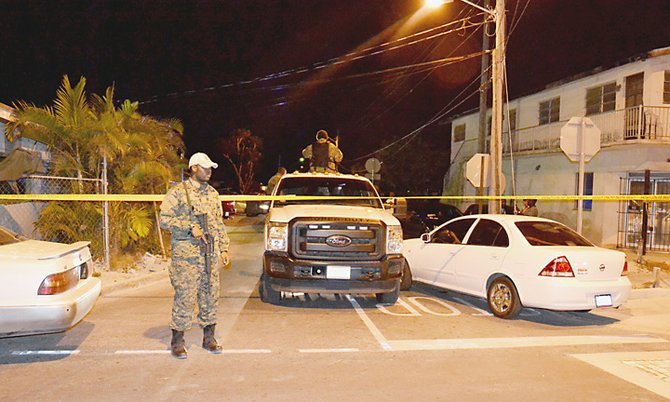 POLICE seal off the area.

OFFICERS of the Drug Enforcement Unit confiscated more than $1 million dollars worth of suspected marijuana in two separate drug raids on Friday, the biggest marijuana find for the year.

SOME of the suspected drugs seized by police in two separate raids on Friday. Photo: Tim Clarke

In the first incident, 42 pounds of suspected marijuana, with an estimated street value of $42,000, was confiscated from a residence off Market Street.

Police say around 3:30pm DEU officers, with officers from the K-9 unit, executed a search warrant on a residence at Eleuthera Close and discovered the drugs.

A 50-year-old resident was arrested. He is assisting police with their investigations.

A few hours later, in the second incident, police confiscated 33 bales of suspected marijuana from a home on John Street off Market Street.

According to reports, DEU officers executed a search warrant on a home around 9pm and discovered the drugs.

As a result of the find six men – five Bahamians and a Jamaican – were taken into custody.

Officer in charge of the Drug Enforcement Unit, Sam Butler said the find was a combination between good police work and tips from the public.

“We did our investigations and we also received information from members of the public. They really helped us out a lot.

“Also, since the two drug finds were so close together, both in the Market Street area, we are investigating whether they are related in any way.

“We cannot say specifically but we are running our investigations to see if they are connected,” he said.

DEU officers have confiscated a significant amount of drugs in the past few days, last week they confiscated $2 million worth of suspected cocaine in Inagua – the biggest drug find for the year and the largest in recent years.

It was the second major cocaine find for the DEU – they also confiscated 49 kilos of suspected cocaine last Friday with a street value of $800,000.

The discoveries resulted in the arrest of eleven men. They have since been charged before the courts.