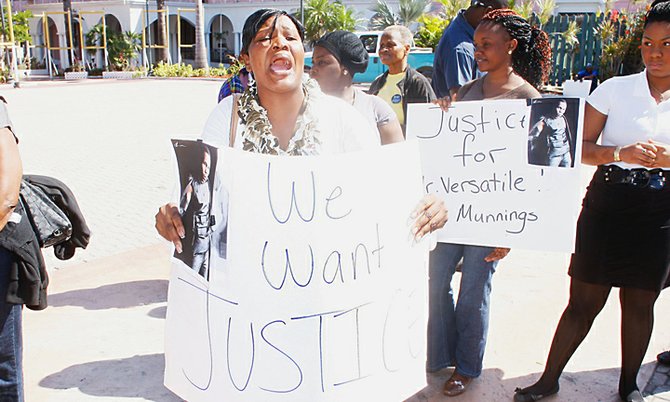 PROTESTERS took to the streets yesterday in Nassau over recent deaths in police custody, such as this woman who took part in the protest outside Parliament, and were joined by people asking for more answers over the recent shooting of Job Munnings. Photo: Tim Clarke/Tribune Staff

FAMILIES of persons who died in police custody called for the resignation of National Security Minister Dr Bernard Nottage when he “ignored” and “avoided” them during a demonstration outside the House of Assembly yesterday.

The protesters, made up of families of men who died while in police custody as well as persons who had been killed during capture, demonstrated outside Parliament Wednesday morning, hoping to attract the attention of Dr Nottage.

However, when he arrived at the House, Dr Nottage went inside, ignoring the calls from dozens of people who had gathered in Rawson Square.

Tabitha Munnings, the sister of Job Munnings, who was shot and killed by police in Abaco earlier this year, said she took it as a personal insult that Dr Nottage would not take the time out to listen to their pleas.

“If he cannot listen to the public, the people who voted him in, then he needs to go. He ran into that building like he had just robbed a bank to avoid us. Dr Nottage is the Minister. He should come and speak to us, but he won’t today and he hasn’t in the past. You call him, he won’t return a call. You leave your name and number and you get nothing,” she said.

“We saw him just now, tried to beckon him to look at us and hear our cries, he just hang his head down and run in there. He should have stopped. The Prime Minister did and Dr Nottage is under the Prime Minister. If Mr Christie can swallow his pride and walk over here, why can’t he? We are hurting, our family was murdered. Enough is enough.”

Ms Munnings said she made the trip to Nassau from Freeport with her mother to speak with the Commissioner to find out why, there has been no movement in her brother‘s case, even though he was killed in January.

“My brother was Job Munnings. He was my only brother and he was shot down in Abaco by the police. They told us it was a mistaken identity, but we went to Abaco and did our own investigation. I mean the people wasn’t afraid to confront us and let us know what gone down. The officer shot my brother for nothing and no one could give us a reason why. Everyone knows my brother, Mr Versatile, how could you mistake him for a wanted fugitive? Was the police trained to shoot in the chest? No one will talk to us,” she said.

“We finally spoke to the Commissioner on Monday and I asked him why we hadn’t heard from him. When my brother died he (the Commissioner) gave us his number and told me I must call him when it was time for funeral arrangements. We text him, we call him and he never returned our calls. We had to scrap to bury him. Who is responsible for burying a person that was killed by the police?”

Earla Dorch, the mother of Jamie Smith who died while in police custody on February 8, said she joined the protest to stand in solidarity with other mothers who lost their sons at the hands of the police.

“I haven’t spoken to any police since the report came out on my son,” she said. “We are now figuring out our next move, but we cannot move forward until after the coroner’s report and that is what we are waiting on and that is the reason I am here. I am standing with these victims because all of us are victims. If we were getting the result we wanted, we wouldn’t be here. Mr Christie came out and spoke to us, I believe he will help. I hope he is not just saying it to calm our fears, but we have to give people a chance and I will give him one.”

Also protesting was Joann McKenzie, the mother of Tyrone Saunders who died while in police custody last June, the family of Sterling Thompson, who was shot by police in Crooked Island last March and Donna Wilson, the mother of Michael Knowles, a 15-year-old boy who is said to have committed suicide at the East Street South Police Station in 2009.

The relatives were all demanding answers from the police.

President of Families Of All Murder Victims, FOAM, Khandi Gibson, who had two brothers killed in an eight-month period,  said it is important that families who have lost loved ones, stick together.

She is expected to meet with Mr Christie on Friday to present him with a list of names of the victims along with their family members.

The families also marched against the granting of bail to accused murderers.

Is this not the same BJ who stood in solidarity with Glennis nah Martin , when young men died in police custody and she demanded answers ? what ever became of their voices?