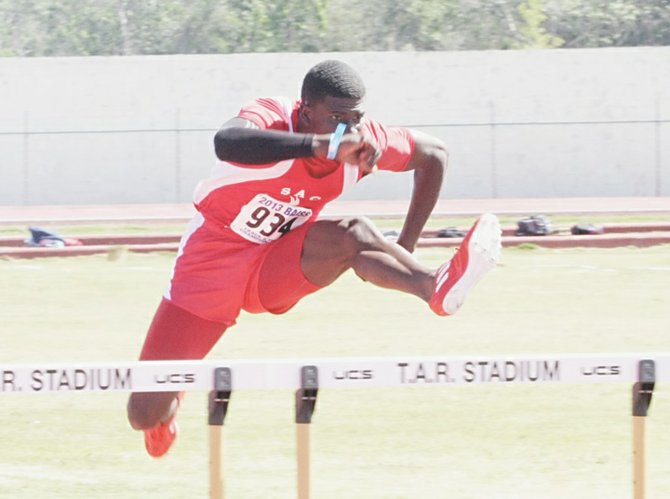 St Augustine’s College head coach William “Knucklehead” Johnson said he wanted his Big Red Machine to get off to a “fast start” on day one of the Bahamas Association of Independent Secondary Schools (BAISS) Track & Field Championships yesterday, but even Johnson couldn’t have predicted the the perennial powerhouses would distance themselves so quickly on their path to a 25th consecutive title.

With a total of 454.50 points, the Big Red Machine leads the field of 13 schools, 106 points ahead of their arch-rivals, the Queen’s College Comets, in second place overall with 348.50.

The St John’s College Giants are third with 131 points, the St Anne’s Blue Waves fourth with 129.50 points and St Andrew’s Hurricanes round out the top five with 108 points.

In a dominant day one performance, the Big Red Machine led six of a possible eight divisions and are currently second in the two others.

The strength of the SAC team was evident on the girls’ side where they led three divisions outright and shared the lead atop the Bantam Girls division with the Comets at 43 points.

In the Intermediate Boys division, SAC’s score of 74 leads the Comets by a 66- point margin, while the Big Red Machine’s senior boys lead the Comets 61-45.

SAC’s Doniesha Anderson set a new record in the Junior Girls’ 400m in a time of 57.96s, well ahead of teammate Dreshanae Rolle’s time of 59.03s set last year.

Rolle, now in the Intermediate Girls division, maintained her first place finish with a time of 58.22s.

Also in the 400m, SAC’s Kinard Rolle surpassed the Carifta qualifying mark of 49.80s with his first place finish in the Intermediate Boys 400m with a time of 49.49s.

In the field, the top three finishers in the Intermediate Girls shot put surpassed the qualifying mark of 12m.