A Woman Of Courage Honoured 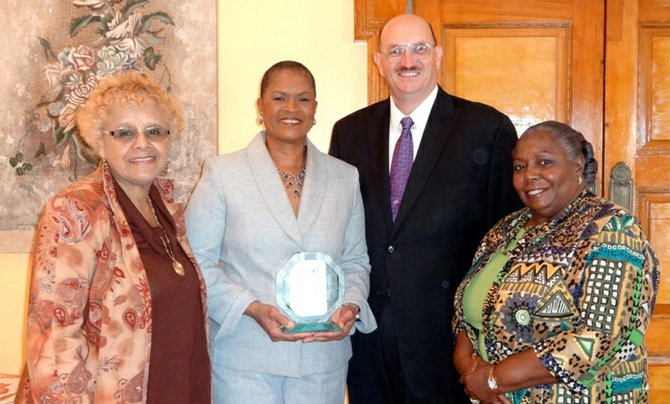 MISSOURI Sherman-Peter’s efforts to address inequalities and advance the rights of women in the Bahamas have not gone unnoticed. The former ambassador and advisor to the Ministry of National Security was recently the recipient of the U.S Embassy’s International Women of Courage Award.

Leaders who demonstrate perseverance in the struggle to address inequalities faced by women and ensure policies that reflect equality are established become nominees for the award.

She was recognised during a special ceremony held two weeks ago at SuperClub Breezes. The event was attended by the U.S Charg� d’Affaires John Dinkelman along with senior US and Bahamian government officials.

“I am deeply honoured to receive the 2013 United States Embassy, Nassau, International Women of Courage Award, and to have been nominated for the Secretary of State’s International Woman of Courage Award. This nomination means so much to me, because it counts me among women from around the world whose commitment and stance in national and international life has earned them recognition as women of exceptional courage and leadership, in human rights, women’s equality and social progress,” said Ms Sherman-Peter at the ceremony.

Her drive to help women “hold up half the sky and carry the weight of the world” is the harvest of a seed her mother Effie LaFleur Sherman planted early in the life for Ms Sherman-Peter and her 15 siblings. The four word phrase “make your life count” was ingrained as a child and is still the mantra Ms Sherman-Peter lives by today.

The early foundation Ms Sherman-Peter was exposed to by her mother and father, John Alfred Sherman Sr, led to her long distinguished career in the Bahamas’ diplomatic core.

During her time as Chef de Cabinet to the President of the Fifty-eighth Session of the United Nations General Assembly, Ms. Sherman- Peter said the injustice women face all over the world became much clearer.

“Service, they say, is a privilege, and I take it as such. I was driven by my early experiences to serve, to step out and make a difference and to make my life count. In the personal mission and agenda to which I committed, service to others, principles, professionalism, self- motivation, team work and hard work, have pride of place. There is no room for limitations on what I could do for my country and internationally, because I was a woman. I am, however, and remain, passionate about upholding the rights of women. I am committed to doing my part to close the gap between the ratification of treaties on women’s rights, and the implementation of those treaties; between laws guaranteeing women’s rights, and the enforcement of those laws.

“I have endeavoured to make my life count, and this is the perspective from which I view receipt of this International Woman of Courage Award, for which I will be forever grateful. This accomplishment will surely have its place in the autobiography I am writing on my life and work in diplomacy and public service, entitled ‘Patriotism, Nation Building and other Paradoxes’,” she said.

Other works Ms Sherman-Peter has written or contributed to include: “Swords into Ploughshares – Building Peace through the United Nations”, “The Bahamas and International Drug Control: A Perspective” and “Gender and Diplomacy”.

In addition to the International Woman of Courage award, Ms Sherman-Peter also received the Award of Honour for her contribution to international drug control from the International Council on Alcohol and Additions, Lausanne, Switzerland; the Sojourner Truth Award of the National Association of Negro Business and Professional Women’s Clubs, Inc, Committee on United Nations Activities, and the “Living Legend” Award of the Zonta Club of New Providence.

“The one lesson that is pivotal to me is that you will not always experience the world at its best; but if you do your best, and dedicate yourself to making a difference in the lives of others, you will, in my mother’s words, make your life count,” said Ms Sherman-Peter.