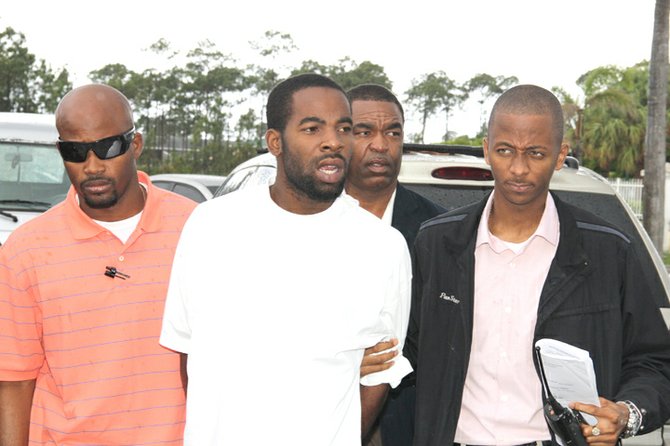 DAVID Alexander Stuart, 22, has been charged with murder in the death of his two-year-old son.

Stuart is accused of causing the death of his son, Peter Higgs, also known as Peter Burrows, by means of unlawful harm on April 28, at Freeport, Grand Bahama.

He appeared in court two before magistrate Andrew Forbes in Freeport Magistrates’ Court yesterday.  He was not required to enter a plea to the murder charge.

According to reports, police and EMS personnel were called on Monday evening to a residence at Magellan Crest for assistance.

On arrival, they found a two-year-old toddler unresponsive.  The child was taken to the Rand Memorial Hospital, where he was pronounced dead.

The toddler’s mother Ranique Burrows, and grandmother Rochelle Higgs, and a number of persons gathered at the rear of the court house around 9.30am for Stuart’s arrival.

Stuart was transported to the courthouse under heavy police guard.

As he exited the police van, Rochelle Higgs shouted to him “I love you David.”

At his arraignment, Stuart broke down in tears and whispered a comment to the toddler’s grandmother, who was sitting at the back of the courtroom.

Stuart was represented by attorney Brian Hanna. He was denied bail and remanded to custody at Her Majesty’s Prison.

Magistrate Forbes told Stuart that he may apply to the Supreme Court for bail.

He adjourned the matter to August 19 when a preliminary inquiry will be held to determine if there is sufficient evidence against Stuart to stand trial in the Supreme Court.

After the arraignment, Ranique Burrows spoke with the reporters outside the courthouse.

She said she was grateful for the time she had spent with her son, Peter.

“Please, parents listen… don’t force your children to go with nobody they don’t want to go to,” she said.

“Please, watch your children; be careful who you leave your children with. If you are a teen mother like me, partying ain’t it. You need to take care of your child. I never partied… after I had Peter; I watched and take care of my child and this still happened - but I thank God for the time I spent with my baby,” she said.

Her mother, Rochelle Higgs, described her grandson as a sweet and caring little boy.

“I took care of him most of the time because (my daughter) was a teen mother,” she said.

Ms Higgs said children should speak up if they are being mistreated.

“We want to go to the schools to talk to the children because so many children are being abused out there.

“This is a lesson to us.  Peter is well now; he is resting with God. And I want the Bahamas to pray for peace for our family,” she said.

If intervention was done at any of these previous stages, the baby would be alive today.

boy its sad what happen but how can you blame the law if a person has something in there mind how can you stop them .Are we a contury of mind readers now please dont make STUPID statements

Clearly the "STUPID statements" are on you for not properly reading. A "failure of law" is different than a "failure of police". Look it up, take your own advice and stop making stupid statements

I have never really understood the reason why if a girl who comes into a clinic or hospital to have a baby and she is clearly under the age of consent, the authorities are not called and an investigation takes place. On the other hand, maybe they are informed and like most things, it's just not "high on the agenda".

When was the last time we read that an adult was prosecuted after a minor had given birth? Considering that a high percentage of births in our country involve mothers 16 years of age or under, it's always baffled me why we never hear about this!

Like all homicides involving babies and children however, this is truly a very sad and tragic event. Collectively, we as a community, failed this innocent little boy badly.

Concerned, I totally agree with you. The law has failed big time. This man should have been locked up for the rape of the mother who was between 12 and 13 for the baby boy is 2 years old.

Due to the serious lack of the police doing their job, this thing (For he is not a man) has robbed a young girl of her innocents and a young boy of his life.

May his new inmates treat him the same way.

If I'm not mistaken, the mother is presently 18 years old, which means that she would have gotten pregnant at the age of 15. The legal age of consent is 16 years old. Generally, complaints of unlawful sexual intercourse would not be made unless it was "stranger" rape.Notwithstanding the age of the mother, you can't have charges unless someone complains, i.e. in every criminal case, there has to be a person known as a "virtual complainant", particularly in sexual offences cases. The "victim" has to testify to the sexual intercourse or accuse the individual.
@concerned citizen...How's the air up there? If we accept that we were all conceived in iniquity and are estranged from our Creator, then we must also accept that we are imperfect, prone to mistakes, and will not always do what is righteous. Remember that even the thief on the cross recognized that he was wrong and sought forgiveness. So why can't these people express regret and sorrow? We all live and learn from our mistakes.

of course we all live and learn from our mistakes ,,,the problem is there are no changes ,,in our country it is becoming the norm to be great grand parents by the age of 50 to 55 ,,that means three people had to give birth btw/ the age of 15 to 17 ,,i am not againts forgiveness but we use religion to forgive or blame sin on the devil and take very little responsibility ,,the father was alright when he got her pregnant ,and when she left the baby w/ him ,,no where does she say don,t have underage or unprotected sex ....

Read your comment again. In my view you took a very self righteous position by saying "and now these two want to give advice". What I got from your comment is that somehow this mourning family deserved what they got because they had unprotected underaged sex which resulted in a teeenage pregnancy and a 30 something year old grandmother. As a people we have an unhealthy obsession with judging people on their sexual habits and determining their worth and value. Why is it these people's responsiblity to advocate against underage or unprotected sex in this situation? Why are they any less worth listening to if they don't promote the message that you want? Don't horrible things like this happen to people who are not underaged? With respect to "underage sex", I remind that the age of consent is purely a modern legal construct. 40 years ago there was nothing illegal or wrong for a 15 year old to have consensual sex. My grandmother and many grandmothers in this country were mothers at 15 years old, and were born to mothers who were likewise "underage". Not all of them were married either.(Gasp!) I'm not saying that that means it was either right or wrong, it was just the way of our society at the time. But I take the position that age does not make one a better or worse parent. My grandmother raised14 children who were a credit to her. She ws actually 13 when she married. I say rather than casting around to take the mote out of these people's sorrow-filled eyes, you cast about and take the beam out of yours. In other words, be the change you want to see in this country...make sure that you are not having unprotected sex with someone who is not your spouse, (having never had sex at all until you get married) and that each child you bring into this world do not have multiple fathers or mothers, remain virgins until marriage, never make any mistakes, do not lie, cheat, steal, covet, or gossip. For now, if you are not married, please keep your chastity belt on and a bridle on your mouth (keyboard). I'll say to you like my mama taught me, "'til you dead, you ain't past nothing."

yadda yadda yadda , the studys bear out the facts that children of children in this age don,t do as well ,also children out of wedlock by and large do not do as well ..the fact is that we our making babies faster than any GDP can keep up and will have larger areas of crime and poverty ..you can not make children irresponsably forever and have a productive society ,,ie Haiti ,,i have 2 children that i raised and are now grown ..if you want to tell me a single mother of 6 from 4 different men stands the same chance of raising law abiding productive citizens, the facts don,t support it ,,i am sorry a child died , but this is not the 1920 the chances of raising a productive adult are minimized when the mother is young and unwed ..if babies having babies is so good how come our crime rate is through the roof ,our children graduate high school without the ability to read or write , the poor inner city areas are gang controlled war zones ,,,our illegitamacy rate is 80% we lack self control and conflict resolution ..to sum it up i don,t think i will take advice from either of these ,,i don,t accept the new norm ,,it is not working ,,with self rule comes responsability ,,sexually we show very little responsability ,,but if you want to accept the " new norm " and when bad results happen take personal responsability out of it go ahead ,,it is terrible a child was lost ,but many things could have taking place to avoid it ....80%of the young girls that are sexually active are involved in transactional sex,,sex for money etc ,,lets look at reality ..cuase /effect ...

And yadda, yadda, yadda to you as well...and because it's you I know those two children you raised (hopefully as a married person and not by yourself...and if you're a woman for the same man) are a credit to you...neither having premarital sex or any illegitimate children. Since you missed the point, we will both continue merrily along. (whistling as I twirl).

whistle away ,,,cuase /effect ,,,cuase/effect,,,my wife and i separated when our children were near adulthood ,,i have made mistakes and so have my children ..may the baby rest in peace ..Now when we start accepting illegitamacy and sex for reward as the norm the results will not be in our countrys favour ..as we are witness to daily ..

I for a fact don't believe the problem is children having children because most teen mothers are just as good or even better parents than half of the mothers who are of age and married. I (was) a teen parent (16) and I am sure I am a better mother than half of the mothers out there and I am raising my son to benefit society. It's not the age of the parent it's the mind set because not only teen mothers 'party' and do things that would affect their child negatively.