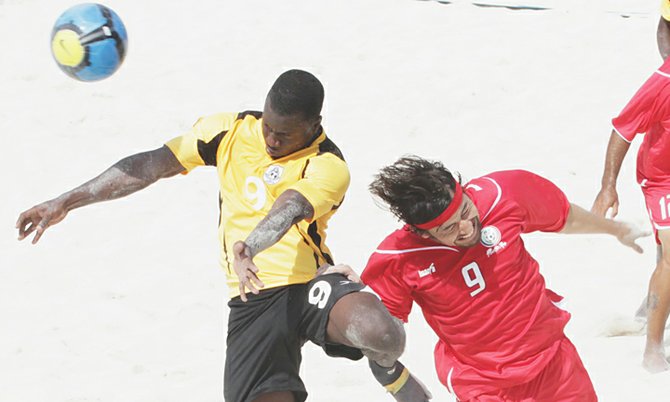 An eager crowd of spectators could not have anticipated a better showing from Team Bahamas, who had a dominant debut performance in the 2013 CONCACAF Qualifier for the FIFA Beach Soccer World Cup.

Yesterday, Team Bahamas scored a 9-1 win over Puerto Rico in the third game of the day at the newly constructed Malcolm Park beach soccer complex at the foot of the Sir Sidney Poitier Bridge.

St Fleur was aggressive from the game’s outset, and hit a strike that barely missed a score on the opening possession when it bounced off the post. He would eventually score at the 4:11 mark in the first period after a scramble following a corner.

Puerto Rico’s Esteban Torres would capitalise on a defensive lapse from the Bahamas and score the equaliser with 2:15 left in the period.

St Fleur put the Bahamas ahead for good with his second goal of the match at the 8:39 mark in the second period. “This game was huge for us, it was very important. We had to get the first win, because if we would have lost we would have been in big problems,” he said.

“I’m just happy the team came out and put on a total team effort and came out victorious and give the crowd something to cheer about right away. It’s a team, so everyone is out there playing for each other and helping each other build and get better as players. When someone scores we all feed off that so we got better as the game went on supporting each other.”

Daniels scored the third goal for the Bahamas in the period with a diving header at 2:09 for a 5-1 advantage.

The Bahamas kept the scoring flurry going in the third with three goals, all courtesy of Joseph and Forbes.

Joseph fired a strike from the Bahamas’ own half that bypassed the Puerto Rican goalkeeper and landed in the top corner of the net for a 6-1 lead at 9:28 and Forbes followed with his first goal less than two minutes later for a 7-1 advantage.

Joseph scored his second goal with 2:42 left to play and St Fleur capped the scoring when he converted a cross with an easy tap at the 1:08 mark.

Team Bahamas defender Ehren Hanna, said the team’s experience at the BSWW Riviera Maya Cup in Cancun, Mexico, over the weekend had a profound effect headed into the qualifier.

“We made up our minds leaving Mexico that we were going to take our games to another level,” he said. “And with that experience we got at that tournament we knew that we would have to step up coming here today and play our best soccer against the teams we are facing over the next few days.”

Goalkeeper Torin Ferguson also credited the team’s experience at the tournament and a rigorous training session.

“The game today, it went the way we planned and it went in our favour. It’s just training. Everything we do in training is what we did out there today,” he said. “We feel confident, and we are ready. The Maya Cup, it did well for the team and it helped us out here today. Even though we walked away from that with a few injuries, it benefited our game as a unit and we hope to see that continue moving forward. It was a good experience and it got us prepared for this.”

Team Bahamas’ head coach Roberto Ceciliano said the team recovered well from a slow start, but he looks to see further improvement as the team heads into today’s match against Guatemala.

“Whenever we play back home it’s natural that the guys play on edge, with a little nerves because they want to show for the crowd, what they have worked on and that they can do a lot of things out there, but as soon as we calmed everything down and relaxed a bit as the game got on and we got less anxious, we started to play better,” he said.

“We have to improve on little things, there is always room for improvement, today that was only to break the ice and we had a few mistakes, but moving forward, we should be good. We need to improve our execution in our thirds, usually we have really good thirds but the guys wanted to show off a little bit for the home crowd, but I know tomorrow, the guys will have put anything negative behind them, because the ice is broken now and we can keep doing a better job each time out.”

The Bahamas is slated to face Guatemala at 3:45pm today.

The Guatemalans are coming off a 5-2 loss at the hands of the United States in the tournament opener.

In their last international beach soccer appearance at the 2009 CONCACAF Beach Soccer Championships, the Bahamas finished sixth overall with losses to the United States and Costa Rica.

The Bahamas was the only team to represent the Caribbean Zone at the qualifier, something regional football representatives hope to improve on with the opening of the facility in the Bahamas.