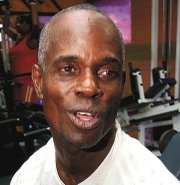 The event, which will be made up of both the Novice and National Championships, is set to be held during the Independence celebrations at the National Center for the Performing Arts on July 13.

Sumner, who has helped to revitalise the sport since he became the eighth president during the 40-year history in 2001, said they are hoping to match or at least surpass the 40 years of existence by hosting as many competitors during the championships. The numbers are expected to include competitors from Grand Bahama and the Family Islands.

At the completion of the championships, Sumner said the federation will select the national team to represent the Bahamas at the 41st Central American and Caribbean Bodybuilding and Fitness Championships in the Dominican Republic in October.

Last year at the 40th anniversary of the CAC Championships, which returned to its birthplace in Puerto Rico, the Bahamas placed third overall. The Bahamas has won seven CAC Championship titles and five athletes, inclusive of Charles Kemp, Joel Stubbs, Natasha Brown, Gena Mackey and James Darling, have earned their professional cards by winning the CAC title.

This year, with the calibre of competitors this year, Sumner said they are hoping to improve on their showing.

Sumner, who has served for more than 30 years in the sport, starting out as a public relations officer and then vice president, said this year the federation will also induct nine former athletes and administrators into the Hall of Fame.

The honourees this year are Jeremy Knowles, former Mr Bahamas, Dwight Palacious from Grand Bahama, the late Melonie Feaster, also from Grand Bahama, Henry Charlton, considered one of the best posers in the region, Sam Williams, Della Thomas, the first Bahamian female to win an international medal, Maxine Darville, a former Ms Bahamas who also won numerous international medals, Amos Saunders and Baldwin Darling, a former bodybuilder who played a key role as an administrator and coach in Grand Bahama.

“All of these persons have made a tremendous impact in the sport over the years,” Sumner said. “We are just so delighted to be able to honour them by inducting them into the Hall of Fame.”

Additionally, Sumner said the federation will be honouring 40 persons who have also played a vital role in the success of the sport during the past 40 years.

“We have had so many people who have had an impact on the development of the sport over the past 40 years, so we really want to take this time to recognise and honour them,” Sumner said. “So we are very pleased to be able to recognise them and show our appreciation to the work that they’ve done over the years.”

The federation, according to Sumner, has had a rich past since its inception in 1973 under the presidency of its founder, the late Hubert Wong. It was known back then as the Bahamas Bodybuilding and Powerlifting Federation. Following Wong was Dr Norman Gay, Alfred DeCosta, Hartley Saunders and Rex Burnside before there was a split with bodybuilding and powerlifting.

After a short sting as president, Sears was replaced by Richard Demeritte before Sumner was elevated from vice president to replace him.

“Over the years, I felt that we have made a tremendous impact in the sport of bodybuilding and fitness,” Sumner said. “We’ve had a lot of support from the athletes and coaches and executives. The fan support has also been tremendous since we moved from hosting the nationals in the clubs over the hill to going into the hotels where we were able to better market the athletes and the event itself.

“We’ve had our share of problems as well. We’re an organisation that is not perfect. But we have weathered the storm and we’re still moving on.”

Sumner, however, pointed out that in order for the sport to continue to strive, they will need an influx of young competitors and they are currently working on introducing the sport to the school system.

“We have to get the sport into the schools,” Sumner said. “We’re working with the Ministry of Education to see how best we can have it incorporated.”

The good thing about the sport, according to Sumner, is the fact that athletes don’t just have bodybuilding to concentrate on. There’s also the swimsuit and the fitness segments for women and the men will now have the introduction of the male physique to compete in.

In the long run, Sumner said the Internationale Federation of Bodybuilders and Fitness (IFBB) that was started in 1946 by brothers Ben and Joe Weider and now headed by Rafael Santonja, is making a bid to have the sport included in the Olympic Games. The sport has been a part of the Pan American Games for the past two sessions and Santonja is hoping that it will enhance their chances of joining powerlifting as a sport at the biggest global event.

Sumner said Santonja and his executives have been working hard to keep the sport drug free as it is under the auspices of the World Anti-Doping Agency (WADA), which has jurisdiction for the doping of athletes in track and field and some of the other major sporting bodies.