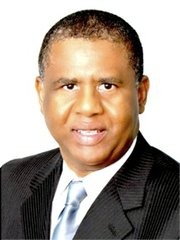 The National Insurance Board’s (NIB) suspended director yesterday blasted the Grant Thornton forensic audit’s findings as “biased and incomplete”, rebutting its “exorbitant” conclusion on the rental of his brother’s apartment.

Algernon Cargill, in a May 13, 2013, letter sent to current NIB chairman, Dr James Moultrie, in preparation for his meeting with the Board yesterday, said Grant Thornton had failed to make “a true comparison” when determining that his brother’s Sandyport apartment was 48 per cent more expensive than a similar unit at Delaporte.

And, tackling Grant Thornton’s findings that the labour rates charged by NIB’s “preferred” electrical contractor, Kenuth’s Electric, were “inconsistent”, Mr Cargill fired back that these were less than the state-run social security system was now being billed for.

The Grant Thornton report noted that Kenuth’s Electric’s labour rates reached as high as $105.05 per hour, but Mr Cargill responded: “I am advised that the rates charged by this company are within market rates and, secondly, are less than the rates that NIB is currently being billed for electrical and air-conditioning services.

“Current invoices reflect a fixed rate of $125 per hour and, according to Grant Thornton’s Forensic Report, Kenuth’s Electric rates were $33.03 to $105.05 per hour.

“Moreover, further analysis by Grant Thornton would have confirmed that these rates were not per employee, as is the current case at NIB, but were for a minimum of two employees dispatched to NIB by the company.”

The letter to Dr Moultrie, which has been seen by Tribune Business, amounts to a feisty rebuttal of the Grant Thornton report and again demonstrates that Mr Cargill is unlikely to go quietly into the night - as some maybe hoping. A protracted, and potentially bitter, legal battle appears to be shaping up.

Arguing that Grant Thornton “did not follow generally accepted practices in its forensic review of NIB”, Mr Cargill again reiterated there was no ‘conflict of interest’ involved in NIB’s decision to rent an apartment owned by Jes-El-Car Ltd, a company beneficially owned by his brother, Godwin Cargill, to house outside contract personnel.

Describing all the allegations made against him by former NIB chairman, Gregory Moss, as “shallow and without merit”, Mr Cargill said he only became aware of plans to rent his brother’s apartment when Raymond Wells, manager of the information technology (IT) department, informed him about it.

Full disclosure of his relationship to the apartment’s owner, his brother, was made to both then-NIB chairman, Patrick Ward, and former Prime Minister Hubert Ingraham before the lease agreement was signed in early 2010, Mr Cargill said.

“Based on the information provided in the Grant Thornton NIB Forensic Report, it is apparent that a transparent process occurred and a competitive pricing analysis was undertaken by the IT Department, led by Raymond Wells, in the search and selection of the apartment and execution of the lease document,” Mr Cargill alleged.

“NIB’s management, led directly by Raymond Wells, not myself, had the fiduciary responsibility to control costs and secondly, the legal responsibility to secure housing for the AIS personnel whom Mr Wells had approved accommodations for at the Hilton Hotel, also without my direct approval.

“Moreover, at their request, and reportedly for convenience purposes, they requested that they ‘immediately’ be relocated from the Hilton Hotel to apartment style housing.

“Using the authority delegated to him as the project manager and sponsor for the National Prescription Drug Plan, he approved this project cost as a part of his budget that he fully and independently controlled.”

Mr Cargill then produced what he described as the “authority” for Mr Wells to control these project costs - something he claimed was missed by Grant Thornton in its report.

The audit report had found that NIB was paying “an exorbitant rental sum of 48 per cent in excess of comparable rental at Delaporte Point”, but Mr Cargill responded that this was “not a true comparison”.

“It ignores the requirements of NIB in respect of the apartment, the advantages of the Sandyport Apartment, and the inputs Ms Gail Carey used in declaring to the Board of Directors that in her view, the Sandyport apartment was superior in many ways to the Delaporte apartment,” Mr Cargill said.

He added that the Sandyport apartment was better suited to accommodate a mix of female and male AIS employees, with more bathrooms and bedrooms.

As to the alleged non-disclosure of his ‘conflict of interest’ with the apartment rental, Mr Cargill said he was never told by his brother that he had been appointed as an officer and director of Jes-El-Car Ltd.

Arguing that the “legal test of conflict of interest” was whether he stood to financially benefit from any decision taken by NIB, Mr Cargill said Jes-El-Car’s ownership made this impossible.

“An excerpt from the Corporate file of Jes-El-Car Ltd, maintained by Davis and Co, together with the corroborating statement from Phillip McKenzie, confirm that I have never attended any corporate meetings or signed any company documents, and that I do not own any shares in the company, and further, that I was not present when the company was incorporated and there is no evidence in their file that I have participated in any way, either directly or indirectly in the affairs of the company,” Mr Cargill said.

YES. GO AHEAD. INCRIMINATE YOURSELF!