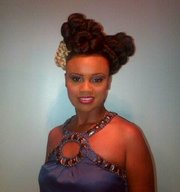 CREATIVE energy was in the air at this year’s Bahamian Hair Battle and Showcase at the Rainforest Theatre Sunday.

Bijoux Dare to Change in association with the Bahamian Cosmetologists and Barbers Association came together to present a number of electrifying battles for $10,000 in cash prizes, under the theme “All Things Bahamian, Celebrating 40 years of Independence”.

Event organiser Dwight Dean said this year’s battle was more than just a hair show. He said it was a battle for different aspects of the beauty industry. “There was the hair battle, which is the commercial side of it, the weaves. Then there was the natural hair and barbers. There was also a make-up and tattoo battle taking place. The nail battle had to be cancelled due to lack of participation,” said Mr Dean.

“Only three people showed up for the nail battle, and the requirement for the competition to go on was five participants. In their case, we refunded the deposits and no one decided to go on, even though they were still given the opportunity to. It was unfortunate because this was the first time it has happened in three years,” he said.  With so many new sections, the promoters are planning to change the name of the event to Bahamian Battle instead of the usual Bahamian Hair Battle.

Mr Dean said the goal of the event is to expose Bahamian talent in the beauty industry.

The Hair Battle was inspired by Bajan singer Rihanna. The singer has always turned heads with her experiments with blunt bobs, blonde quiffs and tumbling cherry red curls. Stylists had 60 minutes to create their favourite version of this fashion industry favourite. The winner for the third consecutive time was Monique Ferguson’s “Styles by Meia”, followed by Jonell Oliver’s “Mirror Mirror” and Monique Davis’ “Monique’s Beauty Salon”. In the O’Natural Hair Styling Battle, the first, second and third winners were Kay Chipman of Nubian Styles, Shedera Colebrook of Exquisite Cutz and Tina Green of Exquisite Cutz. Mr Dean said the Natural Hair Styling Battle was open to all stylists to display their creativity in styling locs, braids and afro kinky hair.

Other first place winners included Italia Williams of iCandy in the “Bright Despair” make-up battle, Robert Hilton of Crazy Ink in the “Hear no evil, See no evil, Speak no evil” tattoo battle and Orthnel Smith of Nassau’s Finest Barber Shop, in the Barber battle.