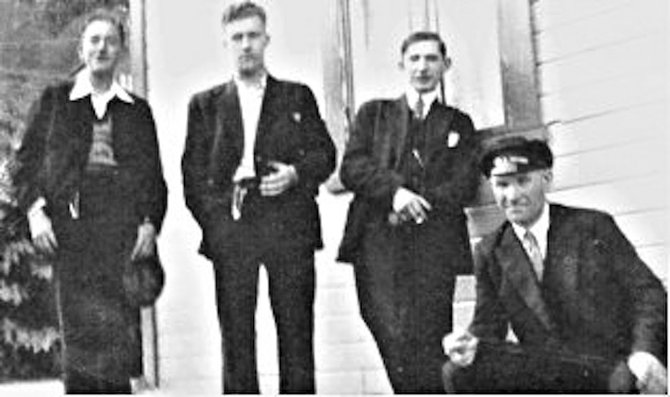 OLAUS Johansen and his three sons, pictured in Norway in the late 1930s.

OLAUS Johansen was the only member of a 40-man crew never to leave Abaco after he and his crewmates landed there when their Norwegian ship was attacked and sank in the Bahamas in 1942. Writer Eric Wiberg tells the story as The Tribune continues its look at war stories and the Bahamas in the run-up to Remembrance Day on November 11.

THE first ship sunk in the Bahamas in the Second World War was the large Norwegian tanker O A Knudsen (11,007 tons), which was attacked by the German submarine U-128 under Ulrich Heyse on the March 5, 1942 east of Abaco.

Deck boy George Smith was killed in the initial attack and Olaus Johansen, a 56-year-old newcomer to the crew, was badly injured. In the course of the day the ship’s captain Knut O. Bringedal returned to his vessel three times, trying to save the ship, for which he earned a certificate from King George V for bravery.

Alas the tanker sank and three lifeboats, one of them motorised, headed for land, which they reached off Hole in the Wall Light, Abaco, on the night of the 6th. By coincidence the inter-island schooner Arena under Captain (later Senator) Sherwin Archer found the men. The following day, the 7th, the Arena led the men to a remote lumber camp, one of several named “Cornwall,” this one situated north of Hole in the Wall and accessed from a jetty at Cross Harbour. This is the story of Olaus Johansen, the only member of the 40-man crew who never left.

Olaus Edvin Gamst Johansen was born on the 24th March 1884 on Måsøy, or Seagull Island, in Finnmark County, in the remote far north of Norway at nearly 71 degrees north. At the outset of war, Olaus went to the even more distant Svalbard archipelago, which stretches as far north as 81 degrees. There he gained employment as a miner. By then he was 55 years old and his wife had died, leaving him to support five children. After a British raid on the island between August 25 and September 3 1941, Johansen decided to emigrate to England and escape the Nazi occupation.

Johansen arrived in the UK on October 10, 1941. During Christmas 1941, a 15-year-old Ordinary Seaman named William George Gill celebrated the holiday in Halifax with friends a bit too much. In the words of his son, Michael, young William missed the ship which was to carry him from Halifax back to the UK. “This was taken very seriously and he and several other shipmates got into serious trouble.” As luck would have it, on December 27, Gill was able to sign aboard the Knudsen, where “he and his friend were the only two on the ship that could speak English.”

In their effort to join their original ship back in the UK, Gill signed off in Glasgow on the 13th of January, making room for Olaus Johansen to sign on board. It was to prove a fateful crew change. As an Able-Bodied Seaman on an ocean-going tanker, Johansen was in for the kind of adventurous existence in tropical climes which would be worlds apart from the confines of a mine in the Arctic Ocean. On her final voyage the O A Knudsen left Port Arthur Texas headed back to Europe via the Northwest and Northeast Providence Channels. That was where U-128 caught the tanker as it ziz-zagged east.

Throughout the entire day, Bringedal and Heyse orchestrated a duel of wills. Since Olaus Johansen was the oldest crew member and had been badly injured in the initial explosion he was placed in the sailing lifeboat. Once the three lifeboats were forced to abandon their burning tanker they headed west for land, and the submarine headed east, having spent its torpedoes. Having rendezvoused with the Arena the group likely cast adrift one of the three boats, as one was salvaged by Captain Granville Bethel of nearby Cherokee Sound, who towed it to there, renamed it Beluga and used it to supply mail and freight to the community of Crossing Rocks.

By a few hours after sunrise all the men had landed at Cornwall. The owner of the mill, Abaco Lumber Company, local Member of Parliament John Wilson (J W) Roberts, was alerted. Whatever was needed was put at the disposal of the survivors, including a radio to contact Nassau. From there, the motor boat, Content S. was dispatched, along with Dr. Lyon, who was sent by the Chief Medical Officer for the colony, Dr John Merrill Cruikshank, as well as a nurse. A rail car moved the men from the rail head to the community. The camp was some miles inland from where the railroad vented to the sea. One of the survivors told a New York radio station, in language deemed acceptable at the time, that “…we were quartered in a chapel and given first aid and bandages by a Negro nurse....” Johansen must have been gingerly carried ashore in an improvised stretcher.

The men must have been greatly relieved to be onshore, despite the sand flies of the coast and the pervasive mosquitoes of the interior. They would have slept soundly, though for the injured it must have been a challenge to manage their pain and adjust to being on solid land for the first time in months. The next day, the little community had to transport 38 out of their 39 new charges back to the rail road terminus to meet a rescue vessel, the Content S, a 120-foot luxury yacht owned by Richard Wilson Sawyer. Her Captain was Stanley Weatherford of Great Guana Cay, Abaco. According to “Pappa” Floyd Lowe, born 1920 and the patriarch of Green Turtle Cay Abaco, the yacht was the “wrong ship” and “not a boat for mail service.”

“Survivors or Torpedoed Ship Land in Bahamas” read the front page of the Nassau Daily Tribune, Saturday March 7, 1942: “It was officially stated today that survivors from a torpedoed ship have landed at an island in the Bahamas and that the Government has taken prompt measures to bring them to Nassau.” On arrival in Nassau clothing and articles were supplied as a result of the Duchess of Windsor, head of the Red Cross, and Lady Solomon taking the unusual step of contacting the owners of shops on Bay Street on a Sunday evening and having them open their stores to allow the men to help themselves on the government’s account. According to an unpublished manuscript by Maxine Sandberg “Lady Solomon [said] both the Duchess and the Duke came down to see the men and received a rousing cheer.”

On March 9, the day after his companions left, Able seaman Olaus Johansen died of wounds in the care of Dr Lyon and was buried on Abaco. The saga of locating the grave is a story of its own. Within a year the lumber camp was broken down and transhipped by barge to Grand Bahama, leaving Johansen’s grave abandoned.

The author made three visits to the site over the years, surveying it by foot, boat, plane and truck. Only a very small handful of amateur archaeologists and wardens know the location. By placing an ad in the Liverpool, UK paper I was able to locate Johansen’s granddaughter and then his great-granddaughter, who shared photographs and details about him. At the time of writing the location of the camp is positively identified, but not the actual grave. It is hoped that a team of volunteers might pin-point the grave and put up some kind of fireproof memorial to him. Because his family could not find Cornwall in the Bahamas, his grave marker reads Cornwall USA, as they thought he had died in Cornwall, Vermont.

• About the Author: Raised in Nassau, Eric Wiberg is licensed as a sea captain and maritime lawyer. He has spent the last 5 years researching and lecturing on German and Italian submarine attack in the Bahamas area for the book “Drifting to the Duchess,” to be published by Brick Tower Press of New York, NY in early 2014.