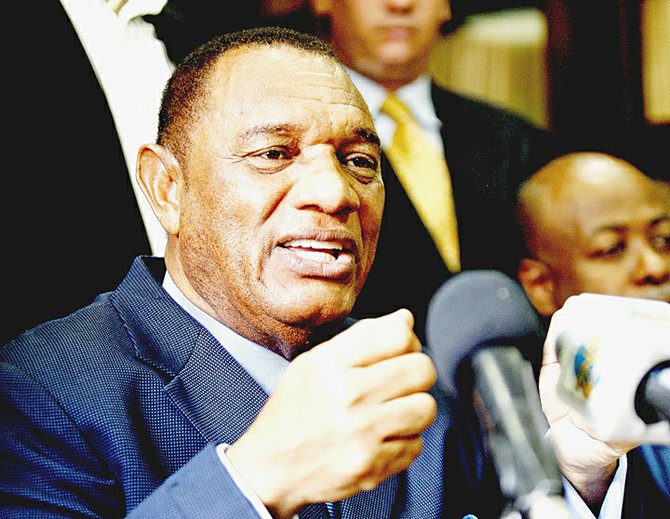 Do you think the government should delay the implementation of VAT?

Responding to the concerns of businessmen worried about how VAT will affect the cost of doing business, Mr Christie pointed out that after the public rejected the option of boosting revenue by regulating web shop gaming, the government had to find some form of taxation to sustain development.

“Everyone in the country must know that to sustain our development, for there to be sensible, serious, forward looking discussion, it has to be accompanied – particularly from people who are involved in the economy – it has to come with alternatives.

“I would expect therefore if [businesses] are going to present me with a paper, they will be arguing to agree on a different form of taxation.”

Mr Christie has hinted that he might be open to postponing the VAT target implementation date of July 1, 2014, if the government is not prepared for it.

He said the private sector needs to realise it is on a collision “cause” with government over the need for additional revenue, and asked “what is the alternative” to VAT?

The Prime Minister added that he was not at all concerned over the level of angst being expressed by the business community regarding VAT and the potential problems it might cause for individual businesses.

“Quite frankly,” he said, “I am appreciative of all of the discussions that are taking place on VAT.

“At some stage I am sure the business community, (will recognise) that we are on a collision cause – c.a.u.s.e – with respect to this matter, that we need additional revenue.”

The government is proposing to implement VAT on July 1, 2014, at a rate of 15 per cent, with the hotel industry to be subject to a lower 10 per cent rate.

Mr Christie said, however, that ultimately, he will have the final say on implementation.

For their part, the co-chairs for the private sector’s Tax Coalition have praised indications that the Prime Minister was open to postponing VAT implementation day as “fantastic”, warning it was “paramount” that the economy be protected.

Pointing out that the government would not achieve its revenue-raising objectives if the economy “went to hell in a hand basket”, Robert Myers said he was interpreting the indications positively, and as a sign that the government was listening to the private sector’s concerns.

Simple sales tax at 4 - 5% rate on all sales of services or goods, eliminating from coverage, residential rent, food and medical. Areas already taxed to be exempted or a credit provided, such as real estate transfers which are already taxed at 10 - 12%.

VAT requires very sophisticated accounting and record keeping that quite frankly is not going to be possible at the current level of Bahamian business sophistication. The cost of compliance in our society and the level of consequential avoidance, will more than eliminate the fairness advantages of a VAT regime, over a straight point of sale, sales tax regime.

Of course the first effort should be the reduction of the bloated bureaucracy, but as that is politically impossible revenue is needed. However, VAT will prove an unworkable nightmare here.

then people will just ship every thing in.

You just KNEW that the botched referendum would come back and bite ya in the a**. It's all a ploy...what he is hoping now is that everyone freaks out so much about VAT that we 'legalize' (change the constitutional laws) and 'REGULARIZE' (tax it)...web shop gaming...it is a win win for the PLP and the numbers man who helped finance his campaign and he comes out smelling like roses. The referendum was a farce, the danced around what the referendum was truly going to accomplish. They never fully educated the public to the terms legalize and regularize. The question they don't want to seem to answer is how can you regulaize or tax something that isn't LEGAL in the first place. Of course they have not shut down the web shops, as they had not played their ace up their sleeve with the VAT and get people running to LEGALIZE gambling and web shops. It's a wicked web we weave out there...they are way more devious than you give them credit for.

If the numbers shops are illegal, close them. Otherwise tax the living hell out of them.

Ahhh...but we voted not to 'regularize'...so in effect we told him we did not want to tax the web shops...so he is acting on the wish of the people and hitting us with VAT. Sneaky so and so's.

I have an idea...it's called a "voluntary tax" or state lottery. It works. It will pay the bills without the use of force.

So is Perry saying if we legalize numbers we don't have to put VAT into law? Well then, Mr. PM please grow a set and put legislation on the table immediately to tax the numbers boys.

What an incredibly dishonest man. The Referendum has nothing to do with VAT. Go tell the WTO and the IMF we are not going to implement VAT, tell me we're gonna tax the numbers boys instead. What an asinine comment to make...

I am truly getting sick and tired of this group of liars that are in power now.

But you can't tax the numbers bosses...it's not a legal enterprise, so you can tax it without making it legal first, otherwise in a round a bout way you are saying it is legal, as you are demanding a tax from them. They knew all this well before the referendum, and as with the VAT whitepaper, they are keeping the information on a need to know basis only and only leaking out what they want people to hear. They even said it themselves, they feel the Bahamian public do not need to know everything they just want a solution, whether they like it or not...and the PM then has the audacity to turn around and say... "The Prime Minister added that he was not at all concerned over the level of angst being expressed by the business community regarding the proposed VAT implementation, and the potential, SHOCK it might create for their firms and the WIDER ECONOMY." and people still follow this mind blindly and without question...scary.

Are you incapable of discourse without name-calling? Or does basic civility elude you?

Ya'll aint serious right? The referendum has nothing to do with VAT. This is just another example of Perry pandering to the ignorant.

Problem is, the Alternative to VAT via the IMF is devaluation, ask Jamaica or Guyana about them apples. Either VAT, Income, or Devaluation hurts the people, not the Politicians who ran up the debt. Bahamians really need to wise up and stop settling for a Red or Yellow T-Shirt.

Poppycock. How much additional revenue is needed and how much are you certain you will receive from the web shops? IF the vote was yes, how quickly could you have put together the necessary framework for compliance? Poppycock. And you certainly couldn't have put all your eggs in this basket since you asked the people for their decision, you must have anticipated the possibility of a no vote, there was an option on the ballot after all.

So many number players i know voted no b/c they believed if it was taxed the pay out would be less ..Also a lot of people that voted no thought it would please God and he would stop sending them dreams to win if they voted yes ,,lmao ,,lets face it we have a large % of our population that are very easy to manipulate ,especially when you throw in their greed and something for nothing way of thinking ,,TAX THE WEB SHOP CASINOS

All you folks whining on an internet comment thread have two options if you don't like this.

Rise up, or shut up.

This is your country. You voted for these people, and at the end of the day, they are accountable to you.

Do nothing, and YOU let this happen.

Apathy is the root of all evil doers.

...and that there is the problem...it will directly affect you whether you voted or not, so you SHOULD give a F@CK...but I am torn...if you did not vote, then I do actually give you less credence to critizice what is going on. I DID vote..and I do give a F@CK because it is my livelyhood as well as the rest of the Bahamas that is at stake. I'm with Wyckoff...stand up and make some noise, or shut up...and don't come begging to me for cash or a loan cause you can't pay yer bills!!

Here is a challenge for PRIME Minister Perry Christie......GET LOST!

HarryWyckoff post says it best....It is time for us to rise up, take our country back from the PLP and FNM Sunshine Boys group of idiots and pirates.

Care to suggest how?

Income Tax, tax the lawyers and doctors, they will charge less for their services and the public will like it.

VAT just robs Joe Schlemiel, we pay for it all, damn businesses will pay only 100 dollars for license, and then the businesses turn around and want to mark up the VAT, a non-existent business expense.