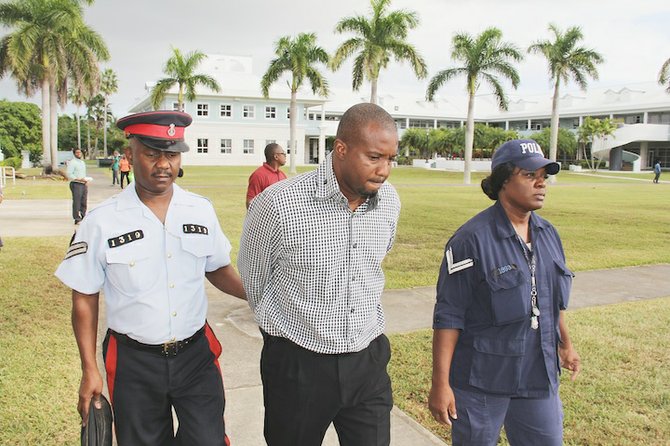 FREEPORT – Screams erupted outside the Supreme Court after a guilty verdict was handed down in the attempted rape trial of Kenyatta Lewis yesterday.

A jury of seven women and two men found Lewis guilty by a vote of 6-3. They retired around noon and returned at 2.30pm.

Lewis, 38, showed no emotion as the verdict was read. He now faces more than 15 years in prison.

Several relatives seated in the courtroom became very emotional and left. Shortly afterwards, a woman identified as the mother of the accused could be heard screaming outside.

The outbursts continued for several minutes while court was still in session upstairs.

Senior Justice Hartman Longley did not appear to be disturbed by the loud screaming from outside.

The victim claimed that sometime around 5am, she accepted a ride from Lewis. She was on her way to a prayer meeting when the stranger stopped and offered her ride, she testified.

On arriving at the church, the woman soon learned that there was no prayer meeting. She claimed that Lewis then offered to take her home.

The victim claimed that Lewis was travelling in the wrong direction and when she questioned him, he told her that his vehicle could not reverse.

The woman claimed that the accused told her that he knew a short cut. She grabbed the steering wheel and the vehicle crashed into a tree.

The victim claimed that Lewis then attempted to put his hands between legs. During a struggle, she said she bit him on the shoulder and finger.

Lewis denied the woman’s story and claimed that he was the victim of a theft. He claimed that while giving the woman a ride he wallet went missing.

Lewis claimed that he threatened to go to the police to report the woman and she turned the wheel.

When the woman tried to flee, he claimed that he held onto her, but was bitten on his finger.

After the verdict was delivered, Justice Longley told Lewis that he was found guilty and convicted of the offence. He then asked Lewis if he wished to say anything.

Carlson Shurland then intervened on behalf of his client. He requested that a probation report be conducted before sentencing.

The sentence hearing was set down for November 26.

Mr Shurland spoke with the reporters shortly after the leaving the courtroom.

When asked whether he intends to appeal, he said that he would have to speak with his client.

“At this stage we have not thought about appealing. We need to meet with the client and with the family and review the transcripts and the judges’ summing up and make a decision at that time.

“Right now, we have not made any decision,” he said.

Mr Shurland felt that the case could have gone either way. He said it came down to who the jury believed.

“It really was a situation where it came down to his word against her word. There was no corroboration of her evidence, and the jury believed her and found him guilty.

“I never question the jury’s verdict. I think it is important in our system that we accept what the jury verdict is, and if we have a problem with what the verdict is and if we find some grounds for appeal, we appeal,” he said.

Maybe he did try but where is the evidence? Honestly this is not a fair trial based on this story. This man could be innocent.

Your comment reminds me of Steve Martin in movie "The Jerk", where his adoptive black parents gave him their spreading your wings speech: "Don't trust whitey, ....and don't trust blackey":)

Wow...this would take king Solomon...suppose she did take his wallet? Everybody who sings in the choir isn't a Christian....I hope this isn't an innocent man...if he's guilty I guess justice is served.

lol....she is a big lier....she first stole his phone that drop from between those same legs....his wallet and phone was in the truck on his dashboard....that man did not rape that woman...she is a liar and a theft...God will avenge him,and salvation will come to her in Jesus Name....do not believe a lie over the truth....he is a hard working decent man of God...by the way if you see the woman...she is 54 yrs...he had other option then her...

Don't dismiss people who legitimately go through the ordeal. I heard of a case involving a young woman who was attacked by two "females" in a hotel bathroom, their intent was clear, she fought and got away. That is "attempted" rape. My understanding is that she didn't press charges because as you say, how could she prove that was their intent? But it does happen.

This case here seems very flimsy, even to prove that it did happen. Seems like a "gut feeling" verdict from the jury.

No lie but this story dont Sound Right from Both the woman and man.. 1st of all they should have investigated what time and when this certain church is have prayer meeting.. because "5am" just dont sound right.. then wen u reach ur destination u ga say that aint no meeting and then still take a ride to your home from a stranger not knowing who he is?? Really??? At 5am??? Now.. with his story.. where was this wallet ?? What made u look for your wallet to realize it was missing while she was in the car? What was the purpose of looking for your wallet and why Would u put your wallet in the reach of a stranger knowing you are only giving a ride? ALL OF THIS NEEDS TO BE INVESTIGATED.. !! From this woman left home walking what was her intensions? NO BUS RUNS AT 5AM AND SEEMS THE CHURCH WAS FMGREAT DISTANCE FROM HER HOME TO NOT CONTINUE TO WALK AND ACCEPT A RIDE.. He was Honest enough to Drop you to Church and then u came back to his car as if you know him to accept a ride home from the church where u had already arrived.. THIS WOMAN SEEM MORE OF A SETUP

My thing is why he did not just rape her one time instead of going to the church to have prayer meeting...by the way yes churches do have prayer meeting at 5am...while you are sleeping someone is praying for you...but God is going to get his Glory of of this ...all I know is that they sent innocent man to prison...without proper investigation... and by the way he could be going to work...at 5am..she stooled his cell phone that drop from between her leg...he went looking for his phone she had it so he said where is my wallet...she fought him because he as taking her to the police station...his mistake was he did not went to the police station right away..

Why would you even want a strange man to drop you at your house to even know where u live at 5 something in the morning.???

Moral of the story: Do not pick up hitch hikers morning, noon or night - male, female or kid. Just how they got where they are, they can get where they are going using taxi 11.