Blow To Stores As Three Cruise Ships Fail To Dock 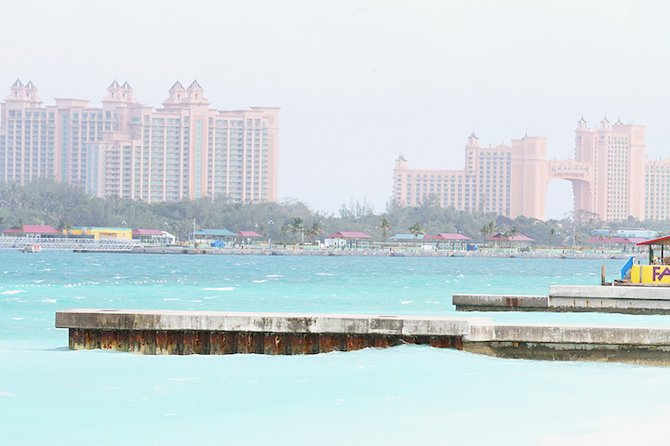 In an official statement, the Port Department blamed rough weather for the cancellations, but merchants rejected this, noting that Nassau Harbour is one of the safest in the region and often serves as a haven for unscheduled cruise ships during serious storms.

They claimed the fact that a large tug boat is out of service may have played a part – particularly considering the bad weather.

“I can’t believe it was just the weather,” said one frustrated shopkeeper. “This is one of the safest harbours around. Actually, when there are storms in the area, we do really good business because we get unscheduled cruise ships that were bound for other destinations. That is how safe Nassau Harbour is.”

“Now when your big tugboat is down, maybe that makes it more difficult.”

The merchant added: “When something like this happens, it’s not just the money we don’t make; I had to send 14 employees home today, but I still had to pay them for the whole day, since they showed up to work.”

According to the Florida Caribbean Cruise Association, 10,000 cruise passengers would spend an average of $640,000 in a day in Nassau.

The government will also have taken a substantial hit in terms of uncollected taxes.

When asked to respond to the merchant’s point of view, Harbour Control officials confirmed that the tugboat in question is currently disabled, but declined to say if this had anything to so with the cancellations.

When the claim was put to Port Controller, Commander Patrick McNeil, he reacted sternly, saying: “The merchants of downtown do not run the port – I do. When they call with speculation, it is just that: speculation.”

Commander McNeil emphasised that the port did not turn any ships away, rather the individual captains decided not to dock in Nassau because of a storm system in the area.

When asked about the inoperative tug boat, he declined to comment, saying an official statement would come from the Ministry of Transport and Aviation.

In the end, the statement issued by the ministry came from the Port Controller himself, but it failed to mention the inoperable vessel.

It said: “Port Controller, Commander Patrick McNeil, wishes to clarify the circumstances surrounding today’s cancellation of the visits of the cruise ships, Allure of the Seas, Carnival Conquest and the Disney Dream, to the Port of Nassau.

“Commander McNeil has reported that the Allure of the Seas, the Carnival Conquest, and the Disney Dream were scheduled to call at the Port of Nassau on Monday, 25th November, 2013, at 6am, 7am, and 8am, respectively. However, according to the Port Controller, the captains of the Allure and the Conquest decided to cancel in advance the visits to Prince George Wharf, due to a weather system which had entered the Northwest Bahamas late Sunday evening.

“The Port Controller has also advised that the Disney Dream did enter Nassau Harbour at 8am, assisted by the tug ‘Snapper’ and two private tug boats. However, as the vessel was attempting to dock, it was unable to complete the manoeuvre, due to wind gusts of approximately 38 knots, and the Captain of that vessel made the decision to leave the Port of Nassau.”

The Tribune sought comment from all three cruise companies, but messages were not returned before press time last night.

Well, you see, Captain McNeil can get away with such statements because he knows there will be no consequences.

There is no such thing as THE Downtown Merchants - because, I assure you, they are not a group - they will not band together to accomplish anything.

If they were, then they would come together and (without prior announcement to others) simply not show up to work next week Monday - and when questioned say they had a flat tire and their spare was also flat. However, they cannot say for certain that it was because of the lack of a vehicle that they did not come to work. When pressed, just say they decided not to come to work - but yes, it is true they had a flat tire - but again, that is not really the reason.

This will of course cost them money - and also they have no guarantee (each one of them) that if they don't come to unlock their store that the one next door will also not come - but instead choose to "rake in" the gains lost by his neighbor. So as a group they will simply all lose.

Captain McNeil can light his tug on fire whenever it gets repaired - nobody really cares.