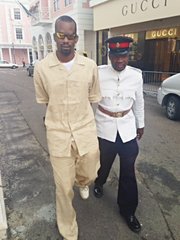 A MAN standing retrial on a murder charge was unanimously acquitted after the crown offered no further evidence against him yesterday afternoon.

The all-female jury, which had been excused for an entire week as legal issues were discussed in their absence concerning the case of 31-year-old Phillip McCartney, was directed by Senior Justice Jon Isaacs to return a unanimous not guilty verdict.

The Tribune understands that the week-long discussions centred around an alleged confession statement by McCartney. He was accused of the August 13, 2010, killing of Chrishonda Swainn, whose body was found off Faith Avenue South just after 7.30am that Friday.

The victim never made it home from a Solider Road club that night after reportedly hitchhiking with a man driving a Mitsubishi Mirage.

However, there was a mistrial due to a hung jury.

Yesterday, following the acquittal and dismissal of the jury, Senior Justice Isaacs informed McCartney that he was free to go unless there was a pending matter or conviction holding him at Her Majesty’s Prison.

His attorney, Romona Farquharson-Seymour, informed the court that the only pending matter his client had was a rape case scheduled for 2014 before Justice Indra Charles.

She said the rape matter, for which her client was on bail, had preceded the murder case.

This was substantiated by prosecutor Anthony Delaney.

Senior Justice Isaacs said that if McCartney’s bail had not been revoked previously, then it should continue.

WHAT A JOKE THE JUDICIAL SYSTEM IS.